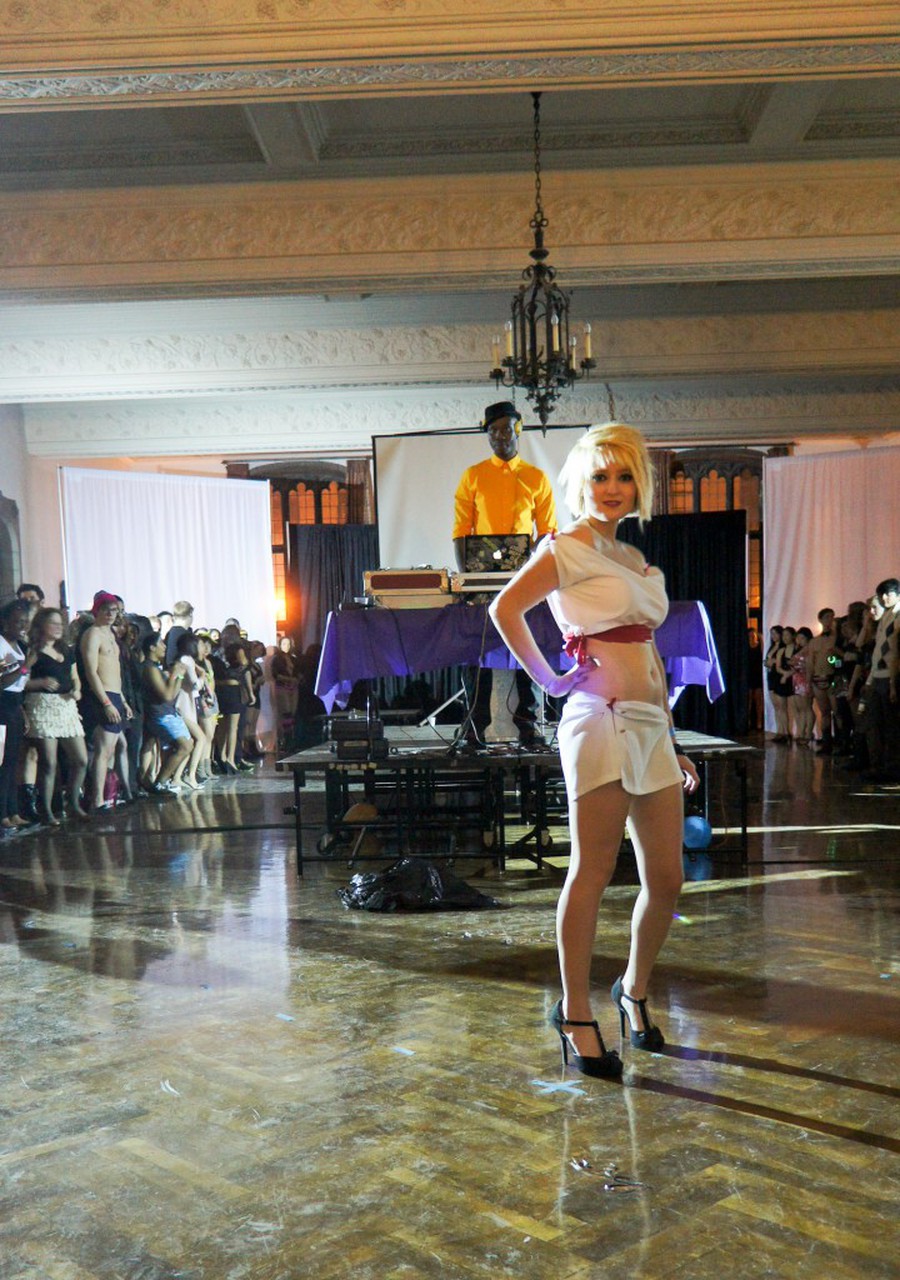 After your first quarter at the U of C, most of your friends will approach you with a very serious question about the school you've chosen to attend: "Is it really where fun goes to die?" Even though you'll quickly learn that you can drink more coffee than you thought you could and that the sky can remain gray for several consecutive weeks, here are some of the traditions that warm up the life of the mind.

For the past 26 years, hundreds of students have spent four days in May working together to build anything from a nuclear reactor to a hot dog catapult in a campus-wide scavenger hunt. The weekend can be polarizing—die-hard Scavvies are known for skipping classes, showers, and sleep while other students avoid the hunt altogether. Teams generally consist of houses banded together in an effort to find or construct as many items from a top-secret list compiled by a team of mysterious Scav judges. Among the 351 items on last year’s list were a cocktail-making piano, securing a meeting with Mayor Rahm Emanuel, and getting an appendix into a jar. Snell-Hitchcock secured the most items and won last year’s Hunt, the dormitory’s fifth victory in the last six years. Scav has also garnered attention outside of the U of C; last year’s hunt was profiled in the New Yorker, and in 2011 Scav officially took the Guinness World Record for the world’s largest scavenger hunt, snatching the title from a few hundred Canadian school children.

Overheard during Scav: “She said that her uncle’s cousin’s brother’s girlfriend works at the South Pole, so I think we’ve got item 64 covered.”

Legend has it that Einstein Bros. was only able to move into the Reynolds Club on the condition that they sold $1 milkshakes each week, a tradition established in the coffee shop that came before it. Years of inflation later, there’s consistently a line of students stretching out the door every Wednesday—more commonly referred to as Shake Day. Different flavors are served from morning to night, so it’s best to schedule your whole day around when they’ll be giving out cookies and cream shakes.

Overheard at Shake Day: “Are these really milkshakes?”

Don’t Step on the Seal

In the Reynolds Club lobby sits a gold version of the University Seal. The legend goes that if you step on the seal, you won’t graduate from the University in four years. While it might seem annoying to avoid the seal at first, you’ll soon find yourself snickering at the hundreds of prospective students who step on the seal during their tours, dooming their fate at the University. Spoiler alert: The tradition was started by faculty who didn’t want students to wear away the engraving.

After months of hibernation, students celebrate the arrival of spring with the Summer Breeze festival. Hosted in May by the Major Activities Board and the Council on University Programming, the festival features a carnival with tons of free food, rides, and games; and a huge concert. Last year Cults, Neon Indian, and Ludacris performed. Crystal Castles, Wale, Nas, Broken Social Scene, Run DMC, and U2 have headlined the concert in the past. Unless you live in a frat, there’s no other way to get free cotton candy, go to a beer garden on campus, and ride a mechanical bull in one day.

Overheard during Summer Breeze: “I just crowd surfed next to the That Kid from my Hum class.”

Houses often raise money for bonding events by selling t-shirts with the University logo on the front and a self-deprecating slogan on the back. Regularly sold during prospective student weekends, the shirts make parents think twice before sending their children to the U of C. Some of the most famous slogans are “Where fun goes to die,” “Hell does freeze over,” and, “Where the only thing that goes down on you is your GPA.” But, as you’ll hear over and over again, don’t take them seriously; the only thing the slogans signify is the wit of the student body.

You knew about it when you applied here, and you knew about it when you decided to attend, but you won’t really understand what the Core is truly about until you’re up at 3 a.m. writing a Sosc paper on Durkheim while surviving on a sugar rush from Bart Mart gummy bears and Red Bull. The Core can be what you make of it; writing seminars can be used as an opportunity to work one-on-one with your Hum TA, or as an opportunity to peer-edit the work of that cute classmate that sits across from you. Before it’s all over, you will have six classes in the humanities, six in math and sciences, and three in social science under your belt. Those courses, added to the language requirements, will teach you how to approach ideas that you completely don’t understand and how to casually drop Foucault and Freud into conversation.

Overheard while loving/hating the Core: “My mom and dad have never heard of any of the writers I’m reading.”

To be considered a U of C student it’s almost a requirement to be so sleep deprived, over-exhausted, and mentally checked-out that you end up worshiping pagan gods. If you’re not quite there yet, Kuvia is COUP’s helping hand. Held at Henry Crown Field House for a week in January, students wake up before sunrise, braving the cold to dance, do yoga, and do martial arts together. The exercises have their roots in an Inuit festival, and are supposed to help students keep their mind sharp in the dead of winter.  The week-long festival concludes with a walk to the Point. Assuming you survive, you are rewarded with a chic Kuvia shirt, a hot beverage, and donuts.

Overheard during Kuvia: “I’ve gotten more sleep this week than I usually do.”

In the afternoon of the last day of Kuvia, in the freezing cold, a group of students gather in Harper and take off all of their clothes. No, they aren’t University Theater performers experimenting with existential performance art, they are getting ready to run from Harper to Hull Gate in nothing but their birthday suits. Students line the walkway and cheer on their friends in a gauntlet of speed, bravery, and shrinkage.

Hosted by the wrestling team on the day of Summer Breeze, students drink so much that they have absolutely no idea where they are by the time they show up for the concert. If you have yet to drink vodka from a mini ice luge, Bonanza is your chance.

Overheard at Bonanza: “Where am I?”

Hosted by the Delta Upsilon (DU) fraternity, and called one of the best college parties in the country by The New York Times, the Heaven and Hell party is no Dante’s Inferno. DU divides the three different floors in their house into heaven, purgatory, and hell for the dance floor, decorating each level accordingly. Apparently, the $10 that students shell out for the event does not cover alcohol; a DU spokesperson has said in the past that the fraternity has a zero-tolerance policy for underage drinking.

Overheard at Heaven and Hell: “I heard that there’s a long line for the bathroom in heaven, so I’m just going to hang out in purgatory and see how things shake out.”

Originally founded in the 1960s as a less-you-wear-less-you-pay event, the Lascivious Ball is an opportunity to wear as little as you want and get away with it. While the event was dropped by University administrators in the 1980s over concerns of lewd behavior and alcohol use, it was reinstated three years ago with one set price for admission and a rule against genitalia exposure. The ball offers a lingerie fashion show and an opportunity to celebrate sexuality on campus.

Overheard during Lascivious Ball: “Too much or too little?”

Every Wednesday night, students rush to finish their homework early so that they can go to Bar Night at Alpha Delta Phi. Held in the fraternity’s basement, students can enjoy beer and other drinks for less than $5. Bar Night is also the reason why no one will show up to your 8:30 class on Thursday morning.

Overheard at Bar Night: “Was that my TA?”

If you’re walking across the quad and someone from class avoids eye contact with you, don’t take it personally. U of C students may be able to do Delta-Epsilon proofs and understand complex price models, but small talk isn’t always their forte. Take any chance you can get to talk to new people. Even if it takes a little coaxing, they’re probably just as eager to talk to you.

Overheard being socially awkward: “Do you want another beer, or would you rather talk about the problem set?”