With Redford at the helm, all's not lost 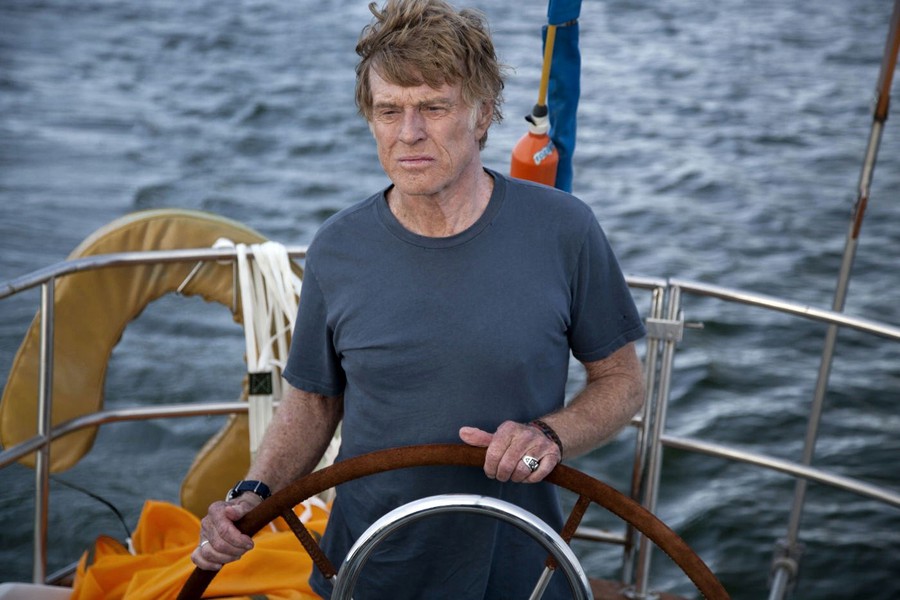 All Is Lost is the powerful story of a man’s solo adventure at sea. The adventure begins when a container rams into the sailboat manned by the only and nameless character, played by Robert Redford, and leaves a hole in the boat’s hull. The character’s misfortunes only continue after this setback: shortly afterward, the boat sails into a severe storm that leaves the anonymous mariner fending for his life in the middle of the Indian Ocean, in a lifeboat with very limited supplies.

The movie begins with a long, beautiful shot of the ocean and sky at sunset. This scene, which is reminiscent of a Monet painting, is accompanied by one of the few verbal moments in the movie: the narrator (Redford’s character) is apologizing, presumably to his family. The reason for this apology, along with most of the film, is never explained. This narration is the longest speaking part of the 100-minute movie, during which the mariner speaks only three more times: first to make an SOS call on a broken radio, later to express frustration at the lack of fresh water on the lifeboat, and finally to cry out for help when a cargo ship passes by.

The director, J.C. Chandor, who is relatively new to Hollywood and known for his previous film Margin Call, demonstrates impressive attention to detail. The focus of the film is largely on the actions of the mariner, who calmly—even professionally—calculates his next moves. Chandor reveals the character through actions rather than words, which is a refreshing approach. It seems that nothing should go wrong with the boat that “Our Man,” as Redford’s character is named in the credits, is sailing, but nature throws obstacles at the clearly experienced sailor. This persistent man-versus-nature struggle is in many ways predictable, but beautifully done. All Is Lost is a paragon of a modern existential journey.

Redford gracefully demonstrates his Oscar-worthy acting in his nearly wordless performance. His weathered and aged features, which become more and more sunburnt as the movie proceeds, are the visual focus of the film. One may only guess at the character’s past, but the existential theme of the movie is effectively conveyed through Redford’s stellar performance and the few words that Chandor chose to keep in the movie: “I fought to the end…. I don’t know what that was worth.” All is Lost naturally guides the audience to ponder existential questions by showing the struggle of a confident man hovering between death and survival.

All Is Lost, directed by J.C. Chandor, is playing at AMC River East.