Joe Scarborough writes The Right Path for the right 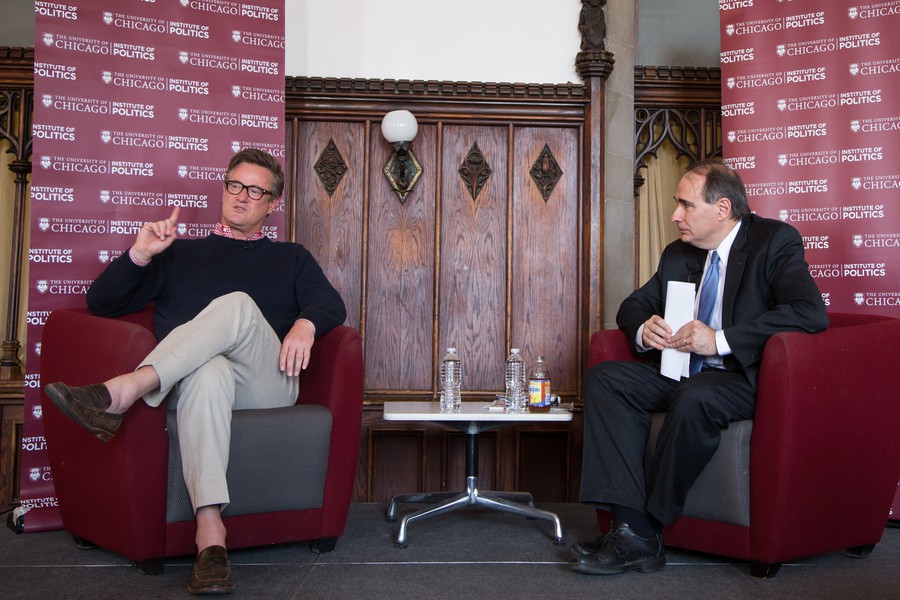 The latest NBC News/Wall Street Journal poll showed that the Republican Party is viewed positively by 22 percent of the American people, an all-time low. In light of this statistic, Joe Scarborough, the conservative co-host of MSNBC’s Morning Joe, came to the University of Chicago on Thursday to talk about his new book, The Right Path, which lays out his vision for how the Republican Party can win back the support of the American people.

Scarborough told IOP director David Axelrod that Republicans “cannot listen to the most extreme voices in the GOP” anymore.

The former Florida congressman went on to say that the reason why Republicans were once viewed more positively, allowing President Ronald Reagan to win 49 out of 50 states in his reelection bid, was because “Reagan took on the extremists.”

“Reagan signed bills conservatives did not like… He hated gridlock more than anything else. He wanted to get stuff done,” Scarborough said. “I am for small government, but small government is not no government, which is where a small faction of our party is.”

The far right has been able to commandeer the Republican Party, Scarborough said, thanks to a lack of leadership from Speaker John Boehner, among others.

“Being a leader is about getting people to do what they otherwise would not...If the party had a strong leader, the Tea Party would follow,” Scarborough said.

However, despite all the troubles that Scarborough sees with the Republican Party in Washington, he believes there is great hope for the GOP coming from the states.

“If you want to know what Republicans stand for, don’t look at D.C.; look at the states. We control 60 percent of the governorships in America,” Scarborough noted.

During his discussion with Axelrod, Scarborough identified specific policies for which he believes elected Republicans have abandoned their party’s founding principles and lost the support of the American people. A core Republican tenant, Scarborough said, was to be fiscally conservative, and yet elected Republicans in D.C. deserted this belief under President Bush, who inherited a budget surplus and left office with record budget deficits. In addition, Scarborough pointed to the wars overseas as a serious violation of what Republicans stand for.

“We are supposed to go to war as a last result. We are not supposed to occupy countries for 12 years. We should not spend $2 billion a year [fighting in Afghanistan],” Scarborough said.

When questioned by an audience member about what Scarborough thinks of President Obama as a leader and his performance so far in D.C., he said that the President was elected too early.

“[The President] would be more effective if he better understood how D.C. works. He needs to call Republicans and reach out to them… I know he dislikes D.C.,” Scarborough said.