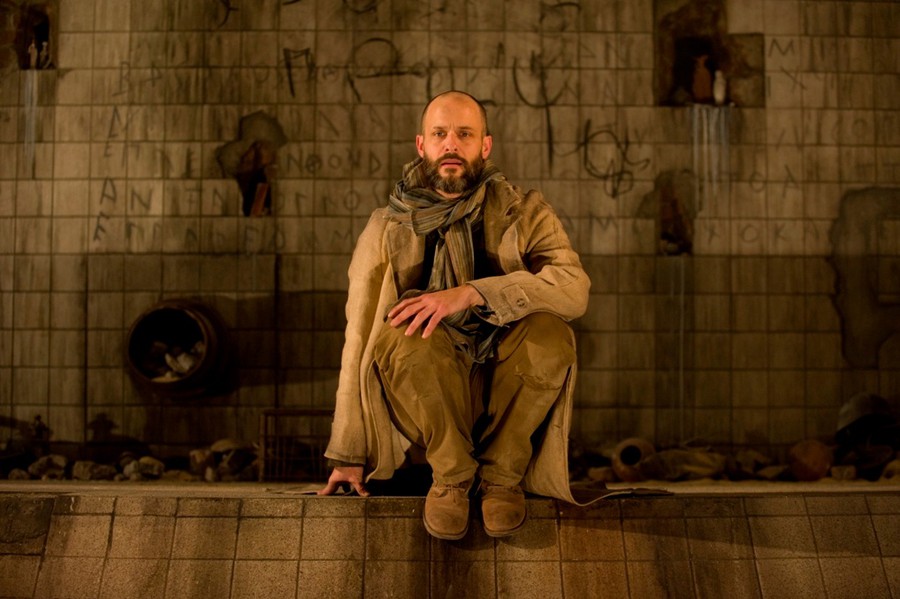 Timothy Edward Kane stars as the Poet in An Iliad, back at Court after an award-winning 2011 run.

From the industrial bowels of his rusted and rotting home, clothed in muddied rags and shrouded in a dark countenance, the anonymous narrator of An Iliad—Court Theatre’s remounted, one-man adaptation of Homer’s epic—recalls the events of the Trojan War as if from personal experience. Adapted by Lisa Peterson and Denis O’Hare (of TV’s True Blood, American Horror Story, The Good Wife, and numerous others) from Robert Fagles’s translation of the Iliad, the production takes a unique approach to a much-told story.

Rather than merely retelling the narrative, the Poet (portrayed by seasoned performer Timothy Edward Kane) molds it to the present moment. He begs the audience to imagine hundreds and thousands of Greek soldiers not as the distant and dusty figures of history, but as young boys from our own memories—from Ohio or Florida—who fought in World War II and the Iraq War. With his hands, he drafts maps and worlds, diagrams of trench-laden battlefields littered with the bodies of one’s own neighbors and friends. He devours the story and internalizes it, and he does this with such mad enthusiasm that the audience cannot help but do the same.

It is from this precise sense of intelligent madness that the show draws its power. Kane accesses the Poet’s blinding preoccupation with the story in a manner that is both manic and deeply distraught, both incredibly humorous and utterly detached. In one moment, his witty commentary swells the audience into laughter, and in the next—almost instantly—he descends into the dark pits of memory. Kane’s performance brilliantly explores the chasm that lies between the act of telling a story and the act of experiencing one; he does not simply narrate the events of the Iliad, but rather takes ownership of them and in doing so creates an entirely new epic of his own.

Kane’s striking performance reverberates within an extremely well-designed set (courtesy of the talented Todd Rosenthal), which functions as both a backdrop for and an active participant in the production. Seemingly empty grates suddenly issue forth beams of light, caverns spew out sourceless breezes, and old ducts cast ominous shadows. Kane fluidly works upon every surface of the stage, handling the space with a stunning effortlessness that can only have resulted from hours of dedicated practice. The lighting and sound design are similarly effective, as the sparing music imbues the performance with enough pathos to carry the Poet’s words, but not so much that his already-emotional presentation spills into caricature. Every aspect of the show serves to enhance its movement, and this harmony results in a unique energy that one rarely expects from a one-actor production.

Though it takes some time to warm up to the Poet’s narrative technique (which can, I admit, feel a bit heavy-handed at times), one learns very early in the show that Kane maintains a firm grasp on his character. If nothing else, the sheer length of the monologue, the daunting task of carrying a multi-hour show alone, would be enough to earn him the raucous standing ovation that greeted him during his bow this past Saturday night. However, the performance did not stun the audience merely by virtue of being impressive: It did so because it was at once inspiring, ominous, and deeply ashamed. I left the theater with the sense that I had witnessed a truly incredible tale, though it was not one of epic battles and rose-tinted dawns and god-loved heroes, but rather one of a man possessed by a story, simultaneously in love with and plagued by the act of telling it.

An Iliad is at Court Theatre through December 15.