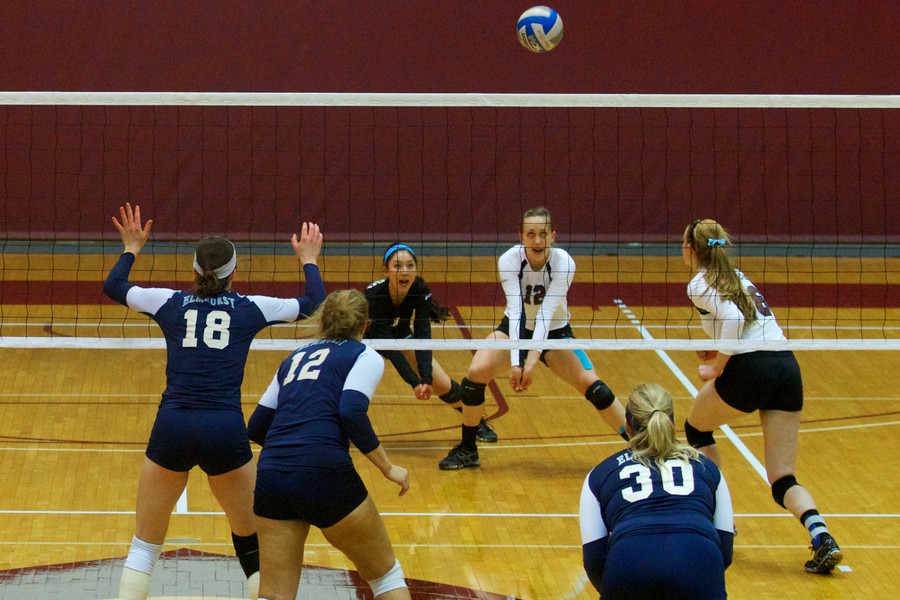 The Maroons (23–10, 6–1 UAA) flew out yesterday to Waltham, MA for the UAA Championships at Brandeis. The South Siders will play their first match this afternoon against Rochester, a team they beat 3–0 on October 5 at the first UAA Round Robin.

Rochester (8–25, 0–7) is the eighth seed in this weekend’s tournament, which features eight teams. Chicago is the top seed. But even with that difference in ranking, Chicago is not taking this game lightly.

“We need to start off strong if we want to then see the four or five seed, and then after play in the championships this Saturday,” said fourth-year setter Nikki DelZenero.

This game will be slightly different from the rest played in the Maroon’s regular season, as it is the furthest east that the team has ventured.

“Typically we get to fly out for a couple tournaments due to the UAA universities being spread out across the country, but this year we only fly once. That’s another reason to be excited—it’s something a little different and it motivates us to play better,” DelZenero said.

With this added excitement, the team has been preparing for what could be their fourth-years’ final match. And after a disappointing loss against DePauw this past weekend during the Benedictine Tournament, the Maroons have come together as a team all the more to make this Friday’s match count.

“We had a great practice week the past few days and have been very competitive with one another,” DelZenero said.

This match’s outcome, however, is not all that could be on the horizon for the South Siders in the near future.

“We’re [also] really excited for this weekend as it is a huge opportunity to play some great competition and potentially get an automatic bid to NCAAs,” DelZenero said.

And yet, she still understands the enormity of the task ahead.

“Although we would like to ideally get an automatic bid to the tournament, last week we still had a pretty good regional ranking,” she said. “This puts us in a good position for an at-large bid—regardless, we don’t like to count on that, since it is out of our control.”

It’s difficult not to think about this possibility, especially in one’s last go-round with the team. But DelZenero, along with the rest of the Maroons, knows that they must focus on this weekend first.

“We know that we’re capable of doing some big things this weekend, but we need to stick to our game plan and play as a team, not as individuals,” she said. “I think we’ve all been looking forward to this weekend and are ready to do what we need to do.”

Chicago will play its first match in the tournament today against Rochester at noon. After that, its next matchup depends on whether it wins or loses. More play will happen at either 4 or 6 p.m. on Friday evening. If the Maroons win, they take on the winner of a match between NYU and Carnegie. If they lose, it’s the defeated team of that matchup for the South Siders.