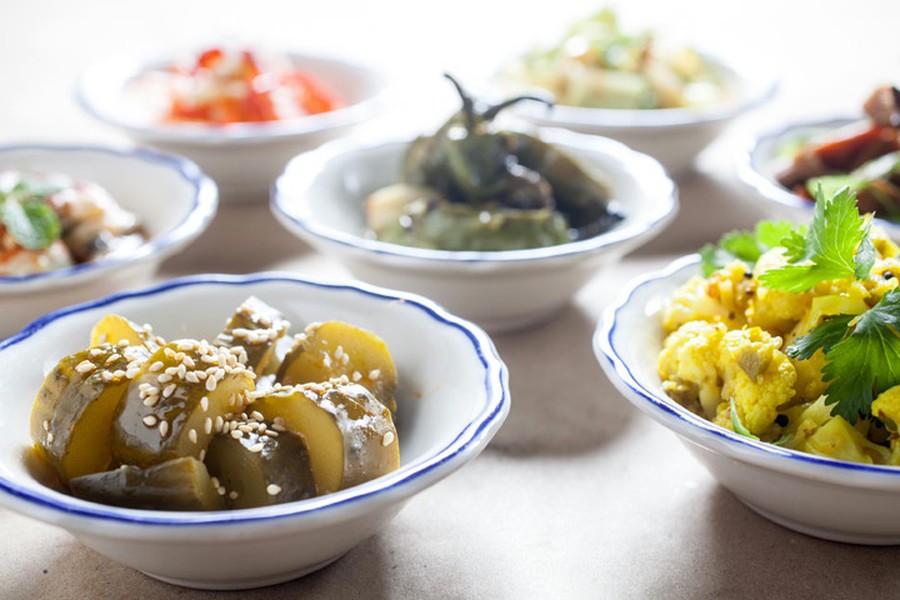 Don’t watch Nickelodeon anymore? You can still get that pickles family fix at Fat Rice.

As regular readers of Hunger Strike may note (shout-out to my homeboys, M.C. “Mom” and D.J. “Dad”), I’m never afraid to bite down on the unsavory issues of the day, even if that means a bellyache later on. Does Guy Fieri actually know the way to Flavor Town? Is consistently eating in the West Loop a leading cause of heart disease? How much frostbite is acceptable while waiting in line at the Doughnut Vault? Though, on rare occasions, marginally deeper thoughts are cooked up within the food pun-riddled recesses of my mind. And thus, sitting up at the counter last weekend at Fat Rice, one of a few new ethnic cookeries clustered up in Logan Square, the subject of colonialism bore heavily upon my furrowed brow.

I mean, was it really that bad? If you gently put aside the ethnic genocide and disease, and the whole social Darwinism monkey business, and basically any and all prevailing theories of international relations and political science…. When all’s said and done and forcefully converted to Christianity, the unrestrained megalomania of our forefathers yielded some delicious cross-cultural results. Bánh mì, chile rellenos, chicken tikka masala—nothing inspires culinary innovation like cultural oppression.

Call it culinarialism (trademark pending) if you will, which Fat Rice eagerly conveys in the form of Macanese cuisine. But don’t you dare call it fusion. That’s a term that completely mischaracterizes the food—a globalized lovechild, the product of an orgy of Chinese and Portuguese influences with no small degree of “participation” from Thai and Indian—that emerges from this kitchen. And my, what a lovely kitchen it is. If only all restaurants could master such effective use of open space. The kitchen is an integral part of the interior, yet it’s not at all intrusive in that hibachi-flaming-onion-volcano-all-up-in-your-grill way. Watch the flames erupt, look on the woks, and despair; the ingredients and techniques are gradually making their way around the world, full steam ahead in your direction.

Working my way, quite literally, down the menu, I took a decisive swing at the hefty pickle selection, but only after two strikes did I secure a solid hit. Spicy, garlic cucumber was virtually indistinguishable from something the Vlasic stork might carelessly dump on your plate...to the extent that I nervously scanned the kitchen for any suspiciously empty jars. And the ginger lime cauliflower, while crisp as can be, felt like biting into an ice cube marinated in cumin. Luckily, Sichuan eggplant, the redeemer, absolved these pickling sins; meaty, yet simultaneously melting at room temperature, bites laced with sesame seeds and chili oil were some of the best I had.

On the more European side, the Portugese-influenced linguica was a thing of beauty. It was a hideous beast of a sausage: a Frankensteinian amalgamation that tastes of garlicky kielbasa, Chinese lap chang, and some spicy chorizo. At least the red cabbage and olives, which were startlingly good to the extent that I am taking the time to praise an olive, brought some civility to the dish. Yet this was only a brief detour on what was primarily an East Asian adventure—a point emphasized by the arrival of the Sichuan-style bacon and shaking chili whitefish.

Though I’m successfully in remission from the bacon boom of the early 2010s (VH1 special forthcoming), belly meat might strike you as an odd ingredient choice for what initially comes across as a generic stir-fry: the requisite veggies, proteins and gloopy sauce all ready for action. But the dish grows on you, as does your appreciation for some of its very un-generic tricks. Any of the particularly charred pieces of leek and bacon (more Canadian than American) are smoky and pleasantly abrasive in contrast with the relatively mild wood ear mushrooms and thick gravy. The flavors steadily intensify, as does the accelerometer on your chopsticks. I would further commend the shaken whitefish for some expert fry-manship, a bite of which rivals the greatest East Coast rendition of fish and chips. Unfortunately, in lieu of chips you just get a shit-ton of somewhat flavorless grilled shisito peppers. Rarely do I question the underlying philosophical grounding of my food, but this dish confounded me. Fish, shisitos, a weird aioli of some sort…all amidst a red sea of Sichuan peppers clearly not intended for human consumption. Sure, I dutifully devoured the dish—piece by piece, Pisces by Pisces—but in the end it was just me picking away at a peck of peppers.

Only on the last leg of this imperialist crusade did I encounter the “large” dishes, heated clay pots brimming with tasty treasures of land, sea, and sky. Each comes with a side of the restaurant’s signature coconut rice, ensuring maximum sauce absorption. Perhaps the most “traditionally” Macanese of the options, the pork belly and catfish conglomeration, is nowhere near as indulgent as it sounds. The pork, a textbook example of belly-braising, was awkwardly isolated to two lone pieces patiently awaiting their demise; I found it disturbingly difficult to discern whether the itty little white bits were tofu or torn fish. But the brown, slightly sweet-and-sour sauce worked amazingly with the rice, and even better with the little shrimp chips served atop the dish. Seriously, give me a bowl of these chips and dip and I’ll watch as many disgusting GoDaddy Super Bowl commercials as you want.

However, Goan cauliflower curry, a rare vegetarian order on my part (intended to “lighten” the meal), was actually far and away the better of the two large dishes. Flavorful is a stupid and hollow food descriptor…but compared to the pork and catfish, damn if this dish wasn’t full of flavor, perhaps even too much. Working off a base of rich, thick curry—sweetened with coconut milk and ginger—the stew was super-saturated with king-size pieces of cauliflower, pumpkin, okra, and tomato; Thai eggplants and long beans made an occasional crunchy cameo. But the coconut milk coupled with the coconut rice was coco-not doing this plate any favors; the monotone flavor fatigue began setting in. By the time the bowl was emptied of its curry contents, I was content with not having curry anytime soon.

Much like the mixed culture and cuisine of Macau, I had mixed feelings about my meal at Fat Rice. Even though there were no outlandish claims of fusion or wacky plays on Macanese standards, whenever you encounter a rare or under-represented culinary tradition, the expectation of uniqueness is inevitably raised. Looking at this menu, every single item reads like a “special”—novel and unexpected. Yet all of this food felt too familiar; my culinary boundaries were unperturbed.

Craving uniqueness above all else, I had every intention of loving each moment and morsel. Yet my taste buds cannot tell a lie, so be still my beating heart. With this many ingredients, techniques, and influences, what could possibly go wrong? Well, mix together too many pretty colors, and soon you’ll be painting black. Or take the opposite route—rely too much on a single color, or flavor—and any detail or nuance is quickly lost. But strike that harmonious chord, find that middle way, and behold as Fat Rice begets even fatter riches.