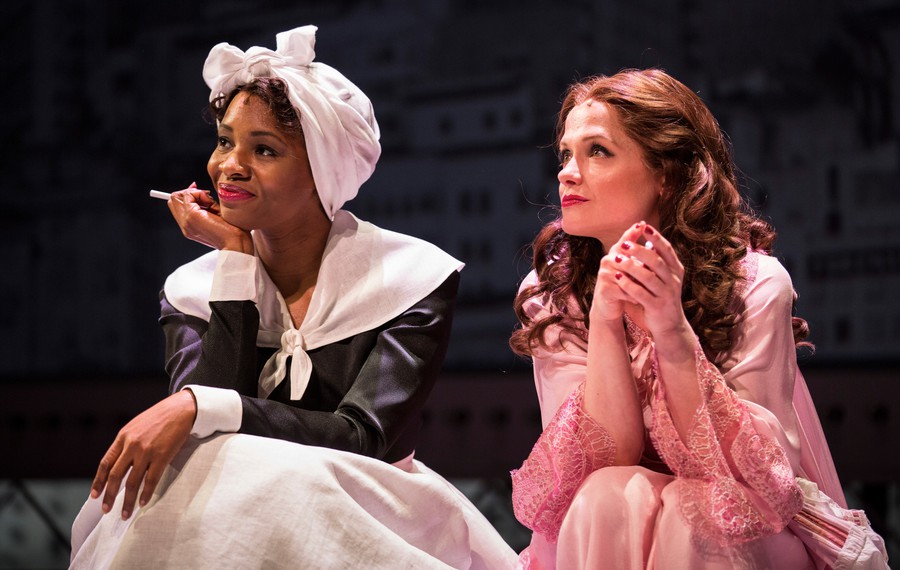 In 1939, Hattie McDaniel became the first black actress to win an Academy Award for her supporting role as Mammy, a maid to the Southern Belle Scarlett O’Hara in Gone with the Wind. Since then, four more black women have won Oscars for Best Supporting Actress. Halle Berry is the sole Black actress to have won for Best Leading Actress. This unfortunate reality reflects the fact that major roles for black actresses are a scarcity, and of those that do exist, most are for supporting roles. In fact, the earliest roles for black women in Hollywood were as slaves, maids, and help.

In her latest play, By the Way, Meet Vera Stark (playing at the Goodman Theatre), Pulitzer Prize–winning playwright Lynn Nottage charts the struggle of black actresses in the 20th century through her fictional character, Vera Stark. The play, which takes place in Hollywood in three different eras—1933, 1973, and 2003—follows Vera, a beautiful, aspiring actress who fails to “make it” in competition with her white counterparts, and ultimately dies in poverty and obscurity.

The first part of the play is both humorous and heartbreaking. In 1930s Hollywood, Vera Stark (Tamberla Perry) is the maid to Gloria Mitchell (Kara Zediker), a young white Hollywood starlet. The duo expertly depicts the disparity in the experience of white and black actresses in Hollywood. While Mitchell easily gets leading roles and becomes the “darling” of many Hollywood directors, Stark struggles to land the few roles that exist for black women. Nottage takes an ironic tone, as she comments on the fact that the few roles for black actors often perpetuate the stereotypes that hurt them. For Stark, most of the available roles are as the maid or slave of a white woman. Ultimately, the best that black actors could do was infuse life and vitality into their roles, as Stark does in her role as a nursemaid alongside Mitchell in the film The Belle of New Orleans.

The second act of the play, which alternates between a TV interview in the 1970s with Stark and a modern day conversation on Stark’s biography, is less successful. It ends in a shouting match between two passionate Stark experts, black lesbian performance poet Afua Assata Ejobo (Amelia Workman) and black “media and gender studies” professor Carmen Levy-Green (TaRon Patton), and leaves the audience feeling awkward and excluded. Perhaps what can be taken away from the ending performances is how complex the struggle for black actresses continues to be today.

In a conversation with the Maroon, Chicago native Tamberla Perry, who has held leading roles at Steppenwolf, Northlight, and Congo Square theaters, opened up about her experience playing Vera Stark. “Being black in the 1930s,” Perry said, “Vera’s options were very limited. But I really tried to breathe life into this role.”

Perry explained that she shared a lot of Vera Stark’s experience. “Vera has to battle the same things as I do today. As African-American women, there are very few leading roles for us. We have to hustle and grind to be in this business. The struggle continues,” Perry said.

Rather than assuring the audience that the experience of the black actresses has improved since 1930, Meet Vera Stark reminds the audience of how present disparities between white and black actresses are today. But, the very fact this play is showing at one of Chicago’s premier theaters seems to suggest that things are getting better for black actresses.