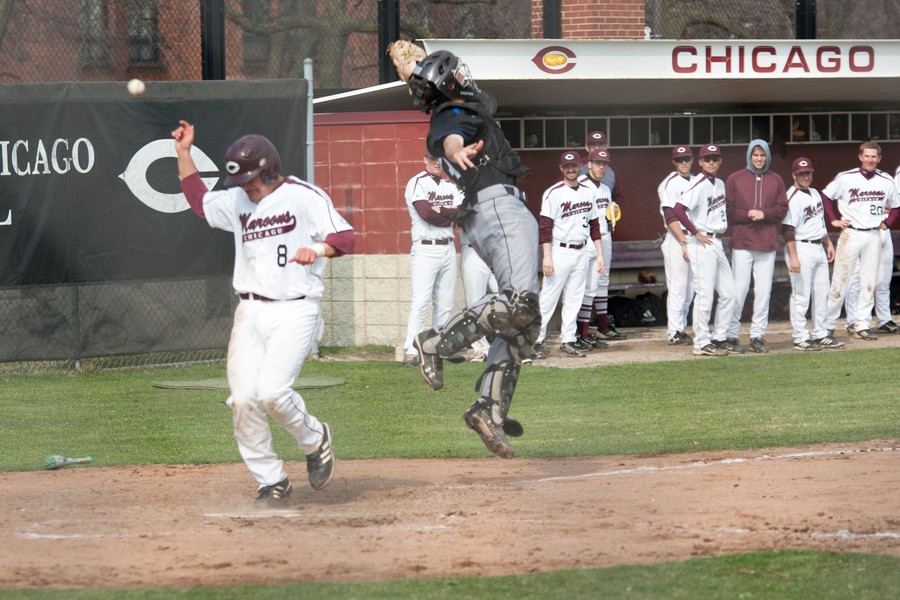 To clarify a statement made two days ago by the Daily Northwestern, the University of Chicago has long soared above Northwestern in academics, but hasn’t rivaled that school up north in athletics since leaving the Big Ten. The Maroons head into their last weekend of regular season play on a high note after edging out the Wildcats in Evanston on Wednesday.

Chicago (24–12) built an early lead, scoring all of its runs in the first five innings, but the Wildcats (21–21) clawed their way back, scoring two runs in a ninth inning rally before falling by a score of 9–7.

“Today was a great team day,” third-year shortstop Dylan Massey said. “Our pitchers did a great job of keeping us in the game by throwing strikes and our hitters hit the ball hard and put a lot of pressure on the defense to make plays.”

In what has become typical Chicago fashion of late, the Maroons got on the board at their first opportunity. Fourth-year outfielder Ben Bullock led off the game with a walk, fourth-year second baseman Steven Schwabe reached first after getting hit by a pitch, and with two on and two out, fourth-year J.R. Lopez singled to right, scoring Bullock and moving Schwabe to second. Third-year outfielder Brett Huff capped off the Chicago attack with a two-run triple, putting the South Siders ahead 3–0.

The scoring continued for the Maroons in the second as Massey and fourth-year catcher Tony Logli led off the inning with back-to-back singles to leave runners on the corners with none out. Bullock reached second on an error in the next at -bat, allowing Massey to score and moving Logli to third. Logli recorded the South Siders’ final run of the inning, reaching home on a fielder’s choice to put the Maroons up 6–2.

Chicago would have one more scoring barrage in the fifth, plating three unearned runs thanks to some sloppy fielding by Wildcat second baseman Zach Morton, to lead 9–2.

Backed by another strong offensive showing, Chicago pitching was able to maintain the lead throughout the game as six pitchers worked to keep Northwestern’s bats—just about—at bay.

With the Maroons’ lead at four in the fifth, second-year Andrew VanWazer came in to pitch and the Wildcats began chipping away at Chicago’s lead, scoring one in the fifth and adding two more in the sixth to close the lead to 9–5.

Second-year pitcher Anthony DeRenzo replaced VanWazer to begin the eighth and left the inning unscathed. However, the ninth inning did not go as smoothly.

The Wildcats began the inning with a leadoff walk by first baseman Jack Havey, who advanced to second on a groundout in the next play. DeRenzo then surrendered an RBI single to catcher Scott Heelan and an RBI double to pinch hitter Zach Jones.

With the tying run at the plate and only one out, third-year Ray Kim came in for DeRenzo with the task of shutting down the Wildcat’s offense. Kim drew a ground out from third baseman Nick Linne at the next at bat, but pinch runner Antonio Freschet was able to score before Kim drew another ground out for the final out of the game, handing the Maroons a hard-fought 9–7 victory.

“Our defense also played well today,” Massey said. “Ben Bullock and [fourth-year] Jack Cinoman tracked down some tough balls in the outfield and Kyle Engel made a few tough plays at third to help stop some big innings.”

The South Siders play their last two games of the regular season this Saturday in a doubleheader against Wash U. First pitch of game one is scheduled for 12 p.m in St. Louis, MO.