Voices from the Right

Campus conservatives weigh in on social stigmas, the Institute of Politics, and speaking out as College Republicans.

Workroom 006 in the basement of the Institute of Politics (IOP), a concrete room with a conference table and exposed pipes labeled “chilled water supply,” is, for some, an ideological oasis in what sometimes seems a univocal desert of campus discourse. The ten people gathering in the room are part of an ideological minority on campus that represents a social group with a much greater presence outside the confines of Hyde Park: conservatives. College Republicans meetings provide a space where students who sit on the right side of the spectrum can finally hear someone say “good point”, or in case of disagreement, the critique is for being “a little too John McCain Republican.” Theirs is a discussion where people critique the coverage of President Obama within the metric of what the media would be saying “if this were George Bush.”

“You’re very lonely in the sense that you don’t have many other people who believe what you do,” said second-year Arianna Wilkerson, a member of College Republicans.

And yet despite the feeling of isolation—eight percent of undergraduates identify as conservative in a year where Mitt Romney garnered about 48 percent of the popular vote for president—College Republicans say that University of Chicago is a place that is open to all ideas in the stream of discourse, even those with which, on the surface at least, most students sharply disagree. President and third-year Jacob Rabinowitz believes that the intellectual rigor and curiosity of students allows the discussion to remain intelligent and not fall into ad hominem attacks since the views from both sides are based not in mindless political allegiances but in well-reasoned discussion.

“I think this is a place where people take ideas seriously and I don’t think it matters whether you’re conservative, liberal, Republican, Democrat,” Rabinowitz said. “No one is able to express an opinion here without justifying it. Sure it’s challenging to be a conservative because a lot of people aren’t but it pushes me to justify the things I believe in and it forces me to think about the things I believe in.”

Second-year Jonathan Godoy, a member of College Republicans, also explained that while heated debate often occurs in social situations no real animosity becomes of it because people are willing to see past political differences. Rabinowitz described that overall he’s felt little negative judgment of his values as a Republican because people seldom judge his views without giving real thought to them and are more often than not willing to have a civilized discussion about the issues.

But a college campus, unsurprisingly, is not immune to social stigmatization. “There’s this kind of ironic thing where the left, liberals, preach tolerance but not when it’s tolerance for people who don’t think like them,” Wilkerson said.

“This year at orientation week we had a college republicans table and it’s interesting to see these first years walk by,” Rabinowtiz said. “Some people walk by and don’t really care—that’s most people. Some walk by and are like ‘Oh I’m a Republican how do I sign up?’ And then there are a few people that walk by and are like ‘Why are you here?  I came to U of C so I wouldn’t be around people like you.’ You have to smile at them and just say ‘I’m here, let’s talk.’” 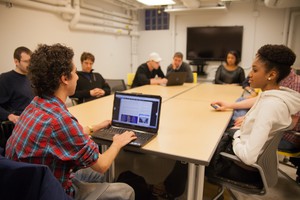 Frank Yan / The Chicago Maroon
This method of discussion in the face of attack is the general model for the College Republicans in their coexistence with the liberal majority on campus. Still some students explain that there are systemic issues that arise from consistently holding the least popular opinion in the room.

“I know that there are many people on this campus that self-identify as conservative that are wary of talking about politics because of perceived social repercussions,” third year member Eric Wessan said. “I think there are definitely people I know on this campus who after finding out I was conservative were no longer willing to be friends with me.”

But there is a strange phenomenon: Despite their small numbers and occasional reticence to advertise their opinions, the campus conservative voice has benefitted from a powerful mouthpiece. The Institute of Politics, in an effort to cement its non-partisan status, has embraced the small group of College Republicans and set them on equal footing with University of Chicago Democrats. Members of College Republicans see the IOP as a source for a number of opportunities that did not exist before for politically active conservative students such as internships with conservative politicians and organizations, and the chance to meet with high-level Republican strategists and conservative thinkers like top Romney 2012 strategist Beth Myers. Hoping to cement the collaboration, College Republicans is in the process of adding an IOP Liaison position to its board.

“You name it, across the board, the IOP has improved our experience,” Rabinowitz, also a member of the IOP Student Advisory Council, said. “Two years ago you’d bring in speakers and they’d be on campus for a couple hours and they’d host a good event for a couple hours and that was it. With the IOP we have fellows who stay here for weeks at a time. I wish this would have been here my first year. I’m happy it’s here my third year.”

Former President of UC Democrats and fourth-year Stephen Lurie explained that from his viewpoint the IOP has legitimized the Republican voice on campus amidst increased conservative political events.

“I think that the fact that the Student Advisory Board has more College Republicans than UC Dems is evident of their inclusion,” Lurie said, adding that a number of members of the UC Dems executive board applied unsuccessfully to the IOP Advisory Board.

Beyond these changes brought with the IOP, College Republicans is in the process of trying to strategically restructure its organization to open up to more students and to recruit more aggressively. While members believe that they have a solid group, they know that there are more conservative students on campus that they aren’t currently drawing in to their meetings. They say that many of these people are self-identifying conservatives that don’t want to or feel comfortable talking about their political views in social situations.

“The whole entire goal we have is to get our numbers up for our meetings. We’re trying to do heavy recruiting for the freshmen coming in and just trying to make our brand bigger,” Wilkerson said.

With a listhost of about 700 emails and general attendance greater than the turnout that the UC Dems gets at its meetings, College Republicans strives to continue to engage conservative students across campus. Even in the most Democratic leaning county in the United States, and the home of President Barack Obama, Republicans have still found a home.

“I live three blocks away from Obama’s house but I have a Romney sign on my apartment still,” Godoy said.