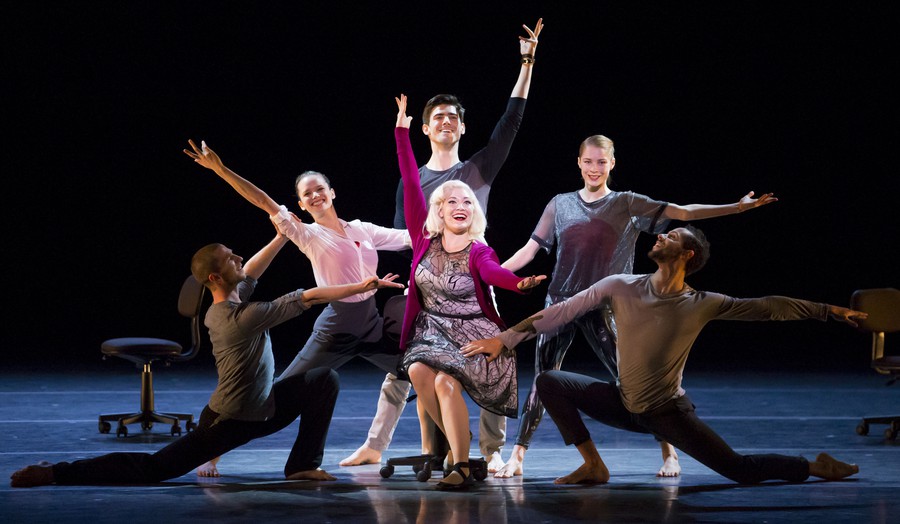 Both leaders in their fields, Hubbard Street Dance Chicago and The Second City combined in the collaboration of the year to create an unprecedented performance that is lively, tender, fresh and adorably absurd. After its brief run of only five shows, everyone is talking about it. Audiences arrived with little idea of what to expect from The Art of Falling but left knowing it was a risk worth taking.

In a video preview, Kelly Leonard, the executive vice president of Second City, said, “This will either be the grandest success or the greatest failure of all time. And I really mean that in the best way possible.”

And it’s true. This show pulled both groups out of their comfort zones in more ways than one. A large part of it was the massive production size that is fairly new to Hubbard Street—following their very successful work One Thousand Pieces, which uses a large cast—as well as to Second City, which typically keeps its teams under 10 people. With the number of risks inherent in this kind of larger production and mixing of genre, it is clear why the show was only scheduled to run for one weekend. Who could anticipate the response? Yet all five evenings the show maxed out the theatre’s capacity, which is over 1,500 people, and received an immediate standing ovation.

It seems clear that the root of its success comes from the nearly yearlong careful collaboration leading up to it. The two groups took the time to find each other’s strengths and grow from there under the guidance of director Billy Bungeroth. From the way the show was billed—a compromise between the two groups’ methods of more versus less—to the performance itself, it was something very, very different, and intentionally so. It was not just dance and comedy living on one stage. It was startlingly honest communication through two surprisingly compatible means.

The show opens with a surprise visit from Hubbard Street’s artistic director, Glenn Edgerton, welcoming the audience to the adventure like Willy Wonka to his factory. What follows seems fit: It’s all one massive ride of inventive staging and quick wit and real people. It’s built with three main storylines interwoven and scattered with smaller vignettes. One story follows an eager new employee who is incredibly nervous around one (particularly cute) coworker. This is the catalyst for several hilarious and bizarre scenes: everything from dancer-made chairs, exercise bikes, crucifixes, and messenger bags to a piece choreographed with office chairs and set to the dramatic music of Swan Lake.

Another story line follows a quiet man who finds himself next to a very talkative older woman on an airplane: a woman who likes to use conversation starter cards and also thinks they have correct answers. The number of bodies on stage for this storyline provides its strength as well as its realism. It lends itself well to a very poignant closing, as all the passengers reach up to turn off their lights at the same time and hang there, suspended. The third story line follows two men through their early relationship and features a sassy and wonderful Croatian grandmother, played by Tawny Newsome.

It was Newsome’s endearing elderly character that held these storylines together more than anyone else. The audience meets her in Act One when she appears to ask front-row audience members some questions in a typical Second City style. But instead of turning them into jokes, the musicians and dancers improvised in response to the answers and then combined them into a “never-before seen” piece. The feat was impressive.

In fact, the show as a whole was moving, entertaining, mesmerizing, and laugh-out-loud funny. Something about the combination of beautiful and careful movements with well-crafted words and music—there are also hilarious songs as the icing on the cake—is very compelling. This collaboration has stumbled upon something wonderful, something that many hope will be repeatable. Five shows just weren’t enough.

The good news for those who didn’t see it is that, though the people in it have busy schedules packed with performances and other work in the coming season, there may be an opportunity to see this again in the not-too-distant future. There’s even a recent precedent for it. Hubbard Street reproduced a very popular piece of theirs just over a year after it first premiered, and a Hubbard Street spokesperson made it clear that the group listens to its audience. Reproducing the show would require both collaborators to be on board, but it sounds like at least one of them is open to it.

I won’t ruin the way the show builds from humor to something much more profound by giving away the ending, but I can tell you that you that you won’t forget it. It will leave you invigorated and hopeful. So get on Facebook. Get on Twitter. Tell Hubbard Street and Second City you’re willing to wait, be polite, but make it clear you want to see this show because, trust me: You do.

Except the Things I'd Change: Second City Reflects