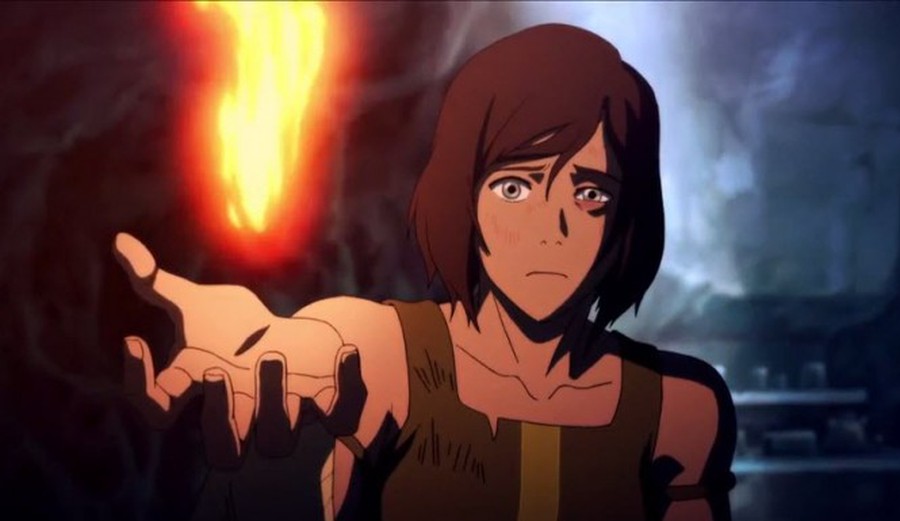 Maybe we all got a little old for cartoons. That’s the impression I got in the fleeting weeks during which The Legend of Korra’s third season aired on Nickelodeon this past summer. The commercials are what got me. Commercials for shoddily made children’s toys, screwball middle school comedies, plugs for the Michael Bay-produced Teenage Mutant Ninja Turtles movie disguised as behind-the scenes special features. It was a bit of a culture shock, especially when football is the only other syndicated television I bother to watch live these days. I got the distinct sense that I was an intruder, and yet the trappings were familiar.

It’s been a decade or so, but I did once watch those screwball middle school comedies on Nickelodeon and cartoons on free Saturday mornings (themselves now extinct in my young-adult life), and to my memory the trappings and tone of the channel were all the same. But we changed, and so did Korra, which might be the reason it’s now going online-only after two years on Nickelodeon.

Avatar: The Last Airbender was set in a world of “benders” who could manipulate the elements to do combat, following the titular Avatar as he opposed the evil Fire Lord in the Fire Lord’s bid for world domination. When the show began its extremely popular run in 2005, television occupied an entirely different universe from the one it does today. Streaming TV shows online had not yet entered the public’s imagination, let alone their computers. If you wanted to watch something, you would watch it live or you would set your DVR (or possibly even your VCR) to record it. Avatar was an excellent show then and it remains an excellent show now, even if our age has brought out some of its idiosyncrasies. That’s probably why Korra appeals to us so much. The sequel series, launched in 2012, was set several decades after the first and brought with it a very different tone. The characters were aged up, the moral balance became a little more nuanced, and the setting was even given a shot of steampunk for good measure. It was still Avatar, but tailor-made for a college-age audience, i.e. the audience of the original show nearly 10 years later.

Now in its fourth season, the show centers on a political vacuum in the former Earth Kingdom filled by a nationalist group with a strong allegorical connection to Nazism. Like past seasons of Korra, there is never enough meaningful ambiguity to blur good and evil, but just enough to make you think that the other side might have some valid points. This season almost went even further down that road, setting up part of its returning cast in alignment with the new villains. It only took about four episodes to put a stop to that however, with said cast members seeing the error of their ways.

Similarly, the early season set up a more personal struggle for protagonist Korra, forcing her not just to grow but to deal with the damages she suffered after three seasons of battle. But here as well, that healing is tied up in a pretty nice bow after only a couple of episodes. It highlights both how much more adult the show has grown and also how much it clings to its roots. Unlike in the original Avatar, death is a constant and acknowledged threat for the cast. And while its occurrence is rare, the show does not gloss over it when it does happen.

Because of that, it can be jarring, almost anachronistic, when some of the cartoon tropes come back around: the non-swear words, the slapstick, the romantic entanglements without even the hint of sex. But I think that fusion is the core of the show’s charm. It’s perfectly suited to our college-age blend of serious and silly that drives the ups and downs of our daily lives.

That college audience has also been driving the many ups and downs of Korra’s production during its troubled history. Originally slated as a full-length series focused on one main story arc, the show was cut down to a 12-episode run before its release. That arc was the egalitarian, anti-bender revolt storyline which became Season One, successful enough on streaming that more seasons were ordered with new storylines to follow.

The show didn’t last much longer on the airwaves, however. Streaming saved the show from death, but the television ratings were never there. We loved the show because it catered to us, but the younger audiences that Nickelodeon thrives on just were not interested anymore. Season Three was finished online, and Season Four was shoved out the door mere months later, Nickelodeon washing its hands of a property which was once among its tent poles.

The show has not quite regained the heights it reached in the first two seasons. It seems that being forced to condense those seasons from what would have been longer plot arcs also gave them a breakneck pace that the more concise plotlines of these last two seasons could not match. Seasons Three and Four together feel like a victory lap for a franchise that will probably never return after this year. They may lack the thrill of the race, but victory laps have their own sweetness.