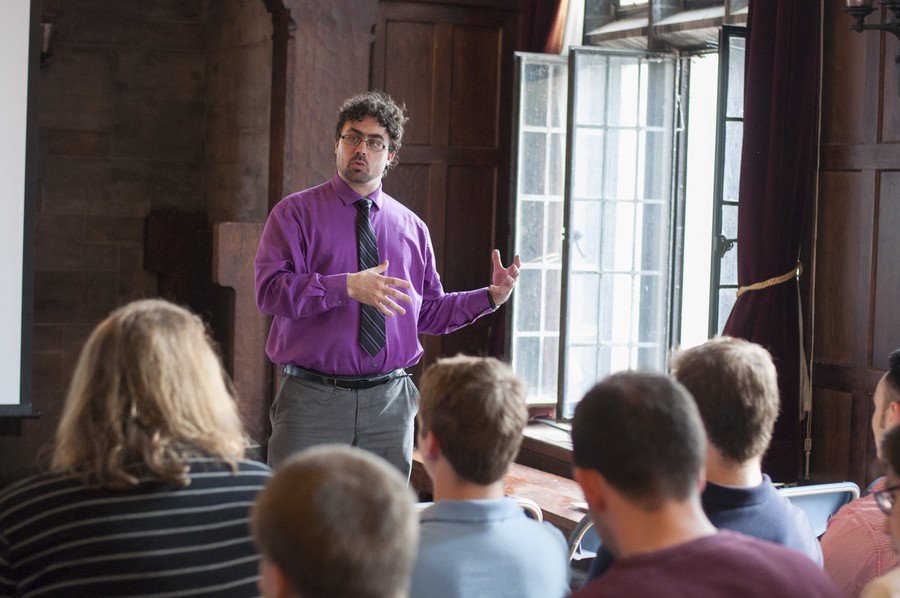 When Ross Wantland, a social justice and violence prevention educator, asked if anyone knew a victim of sexual assault, nearly everyone in the room of about 50 attendees raised their hands.

These 50 hands were those of students and members of the UChicago community who attended the Keeping Our Parties Safe: Fraternity Brothers Against Sexual Assault event, co-hosted by the Alpha Delta Phi (Alpha Delt) fraternity and Resources for Sexual Violence Prevention (RSVP) on Thursday night at Alpha Delt’s fraternity house.

“Somebody needs to step up and start talking about [sexual assaut],” said Aliza Warwick, peer coordinator of RSVP and organizer of the event.

Fourth-year Giuliano Wrobel said that while sexual assault is sometimes discussed in other places, in fraternities it often seems to be a taboo subject, which is a “real shame,” especially since fraternities are often blamed as the perpetrators, as Wantland pointed out during the event. Brothers from several different fraternities were present at the event, according to Wrobel, an Alpha Delt brother who co-organized the event.

Wantland, the main speaker, discussed the stigmas around sex and consent, often asking the opinions of the audience or relating anecdotes garnered from various college students. Sexual violence, he explained, often starts at the mild end of the spectrum: It’s not only what happens on the dance floor of a frat party, but it’s also the crude gestures and words used by seemingly everyone. Wantland also gave examples of the fraternity men he worked with to make changes in their communities, from intervening in potential sexual assault situations to actions as simple as apologizing for possibly offensive statements.

Warwick said that fraternities can play a crucial role in sexual violence prevention and was pleased that the Alpha Delt brothers showed interest in hosting the event when she brought the idea to them. She also hopes that Wantland’s message will reach a wide audience across campus, beyond just the fraternities and the group of students present at the event. “I really hope that people will bring this back to their own communities,” she said.