Best and brightest display their talent at annual Jam Fest 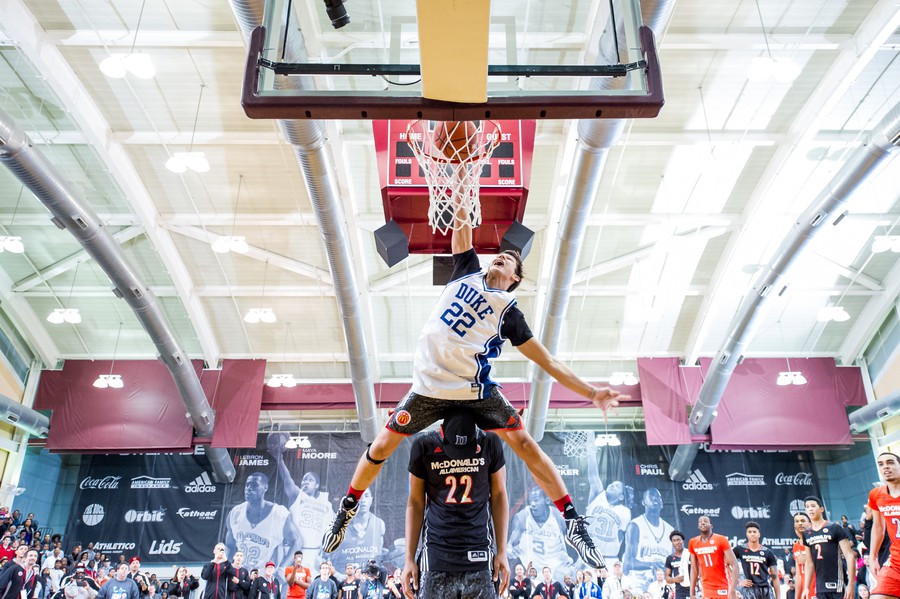 Fans may not know it yet, but they may have been graced by the likes of the future Kobe Bryant, Derrick Rose, and LeBron James.

Those three NBA superstars were once McDonald’s All-Americans and competed in the annual skills, three-point, and dunk competitions that came with the honor.

For the third year in a row, those competitions, now known as the Powerade Jam Fest, were held at the University of Chicago on Monday. The top 48 high school boys and girls basketball players in the country displayed their fundamentals and athleticism at  Ratner Athletic Center.

But it was Grayson Allen that took over the show. After showing his shooting skills in the three-point competition and finishing in the top four, the six-foot-four, 195-pound guard from Florida displayed one of the best dunks in the contest’s history.

“I don’t know many players that can drain it from behind the arc and throw it down too,” first-year observer Max Grad said. “All the other players were seriously taking it to the rim as they practiced while Allen was playing it a bit conservatively.”

Keeping in mind that former Duke star and Chicago Bull Jay Williams was broadcasting the competition, the future Blue Devil Allen grabbed a Williams jersey and cautiously wore it with the help of fellow All-Americans and future Duke teammates Tyus Jones and Justise Winslow.

Starting just outside the three-point line, Allen quickly shuffled his feet before taking five strides, leaping over the gigantic Okafor, and emphatically jamming the ball with his right hand—bringing the crowd to its feet.

“After what I saw at Ratner, I think it’s a pretty safe bet that Grayson Allen’s going to turn some heads and drop some jaws at Duke next year,” Grad said.

As a roar rang through the usually solemn Ratner Center, the McDonald’s All-Americans scurried over to Allen, and Jay Williams uncharacteristically took off his broadcasting headset to congratulate the prolific dunker. Surprisingly, the dunk only received a 68 out of 70 points. Still, Allen was crowned the champion.

“I’ve gone the past few years, and it’s cool to see the future stars of college basketball and the NBA,” third-year Marty Maldonado said. “I thought the dunk contest was excellent, and I’m excited to see how Grayson Allen does in the future.”

History was made on the girls’ end as well. Alexa Middleton won both the skills and the three-point competitions, making her the only player to do so in the history of the event. Middleton will attend the University of Tennessee in the fall.

Only time will tell if Ratner witnessed the next Jabari Parker or even LeBron James.