It's in the air: Lem's smokes up BBQ and sauce right

Barbecue greatness awaits on East 75th street, along with an oddly discerning bouncer and a cupcake shop 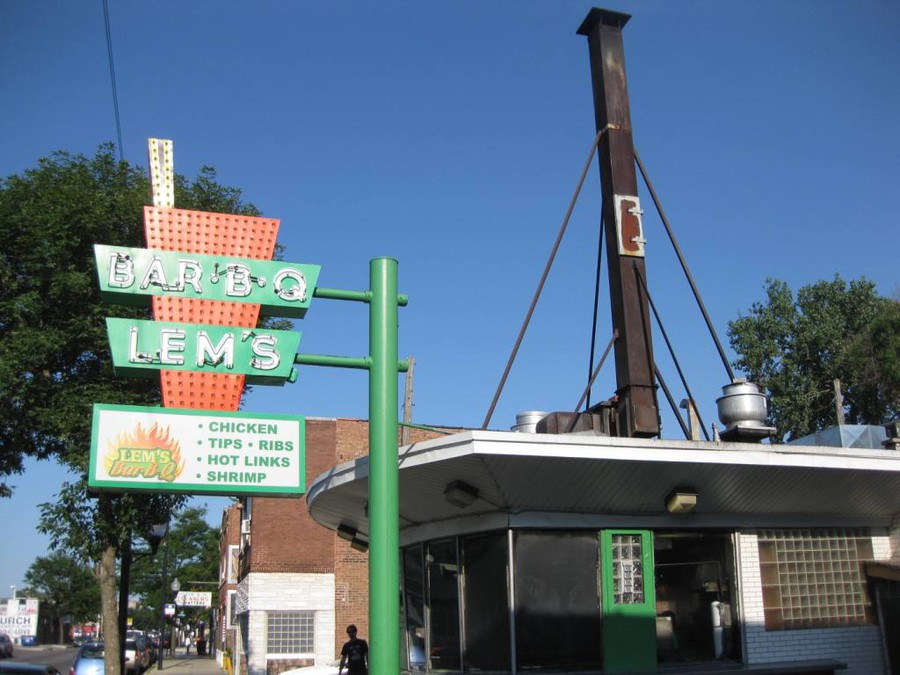 Anyone who is knowledgeable about South Side barbecue, or any plebian such as myself who searches Yelp for barbecue joints that dispense large quantities of roasted meat, will know that there are three major institutions that dominate barbecue in Woodlawn, Chatham, and Greater Grand Crossing: Barbara Ann’s BBQ (7617 South Cottage Grove Avenue), Uncle John’s BBQ (8249 South Cottage Grove Avenue), and Lem’s BBQ (311 East 75th Street).

I had previously been to Barbara Ann’s and Uncle John’s. The owner of Barbara Ann’s owns and operates a motel which is located next to the restaurant, also named Barbara Ann’s—I had to eat there if only to observe this bizarre tandem operation at work. Uncle John’s shares building space with Dat Donut, so it was another natural attraction. Lem’s, however, is not as easily accessible—getting there requires an additional cut westward, past King Drive—and man, it was a trip.

East 75th Street, between Cottage Grove Avenue and King Drive, is a hub of commercial activity that seems to follow neither rhyme nor reason—a bar that posts signs  threatening “anyone wearing  a white T-shirt” with its bouncer’s wrath, a '50s-era record shop, and…a cupcake bakery? This backdrop is important, because it helps visualize the kind of absurdity which flies at Lem’s.

Anyone who’s been to the East 53rd Street Harold’s knows that the fried-chicken smell carries far beyond the limits of the Kimbark Plaza—at least 50 yards out. It’s fantastic, and up until I went to Lem’s, I thought Harold’s was the only restaurant that could literally rule the air. I was wrong. Three blocks out from Lem’s, the entirety of East 75th Street is covered with a gray haze. Visibility actually drops to about 15 feet. But it’s not dense smog or the plumes of a massive inferno—it’s the hickory-sweet smoke that emanates from Lem’s dual meat smokers. In this regard, the restaurant probably violates a few city ordinances, but I am not complaining.

Lem’s itself resembles a '50s-style drive-in, the ordering process an assembly line. You order, pay, and receive your food within five minutes. The menu is spartan, with none of the “combination” meals seen at many other South Side restaurants. Like the California-based chain In-N-Out Burger, Lem’s operates on the principle of making very few food items very efficiently. I went with a large order of rib tips with mild sauce, which clocked in at about $15, tax included. This was costlier than Uncle John’s or Barbara Ann’s, neither of which break $10 for the same meal, but you’re still paying roughly $5 per pound for barbecue.

Since Lem’s has no interior seating, most people eat in their cars; I sat down on the street and ate my food next to a guy who was sitting in a tricked-out Pontiac with 23-inch rims. It was tight—but back to the food. Lem’s serves what any self-respecting order of rib tips should look like: a pile of meat, slathered in some kind of sauce, and served over a bed of French fries which have just been pulled from a vat of beef tallow. But my metric for assessing food is not wholly based on appearance. In this case, it rests in the sauce.

Maybe meat quality and texture are the most important criteria for reviewing ribs, but I went with rib tips, the reject meat attached to the lower end of the spare rib. Rib tips are cheaper and more inconsistent in texture than ribs are, and that’s the point. If you do not savor the mix of burned pieces, stringy meat, and occasional roasted gobs of fat, that’s on you, man.

Therefore, we turn to the sauce.

There seems to be little consensus between restaurants around here about the precise definition of “mild sauce,” the default sauce served atop South Side fried chicken and barbecue. East 53rd Street Harold’s aficionados know it to be a voodoo magic combination of barbecue sauce, ketchup, and potentially something else that just makes the half-dark special work. Classic Harold’s has its internal inconsistencies—if you ask the one on East 64th Street for mild sauce, you get straight ketchup. Lem’s competitors fall closer to the camp of East 53rd Street Harold’s; Uncle John’s and Barbara Ann’s use a mild sauce that is some rendering of barbecue sauce and ketchup, and varies in viscosity—Barbara Ann’s being thinner.

Lem’s mild sauce is something else, something different—it’s spicy with an obvious injection of vinegar. It’s similar to Carolina barbecue. Eating this meal on the curb, I could feel the pinch of the mild sauce in every corner of my mouth. Like the concept of pairing food with alcohol, which allows the individual to drink more, this sauce allows one to eat more. I finished those few pounds of rib tips in one sitting, and I regret nothing.

Lem’s—for the mild sauce alone, do it.

Lem's BBQ is located at 311 East 75th Street and charges roughly $5 per pound of BBQ.