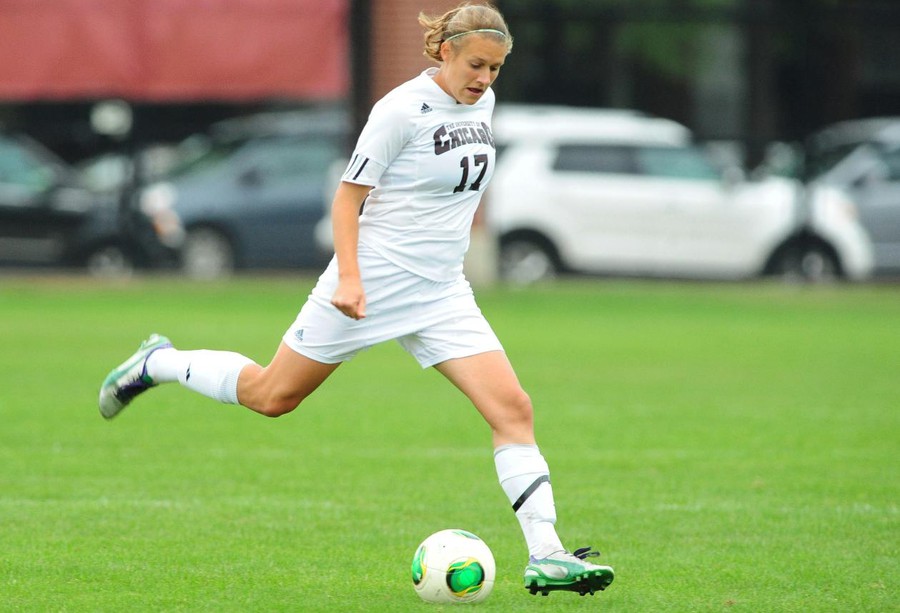 Natalia Jovanovic, known as Tal to her friends and teammates, is a star on and off the soccer field.

After four years at UChicago, the fourth-year forward has a lot to be proud of in terms of her accomplishments as an athlete, a student, and a member of the university community.

Reflecting on her high school years, Jovanovic exemplified attributes of a true student-athlete. In looking at colleges, she wanted a balance between academics and athletics, so when head coach Amy Reifert first contacted her during her sophomore year of high school, the University of Chicago became a tangible future for the rising star.

She recognized that she belonged with the Maroons on her recruiting trip. On the trip, one of the fourth-years took her to a research lab at the hospital where she got to participate. As a high school senior, she realized that UChicago was a place where she could play soccer and make an impact on the team right away, while also pursuing all her academic goals.

Once here, Jovanovic fulfilled every goal that she set out to achieve. In her first year, she started 17 of 18 games, demonstrated herself to be an offensive powerhouse with five goals and eight assists, and even set a school record with four assists in one game against DePauw. She was named All-UAA her third and fourth years, and made two NCAA tournament appearances with the team. This year, she started all 19 games, was ranked second on the team in scoring with six goals and eight assists, and served as team captain.

“I’ll miss her quirky jokes, her contagious smile, her commitment to…each of her teammates,” second-year forward Mary Bittner said. “Tal’s leadership helped strengthen our team and prepare us for competition.”

The main advice she wants to leave her teammates and all student-athletes in general is to get to know other teams. She was able to experience this firsthand as president of the Women’s Athletic Association, which she describes as her greatest accomplishment.

“You can learn so much from the perspectives of athletes from other teams,” Jovanovic said.

She also advocates for the team. She says to do everything you can for your team, not yourself, because the team and the friendships you make are what truly matters.

“We have had great role models and captains on the team since my first year and so I was honored to have been one of the three senior captains this year to continue that legacy,” Jovanovic said. “A good friend once told me the importance of sticking up for what I know and believe to be true and right and to be more concerned with character than reputation, and so I always tried to use that as a guide to make decisions in the best interest of the team. It was definitely more challenging than I had anticipated, which was good because it pushed me to become a more consistent player and leader on and off the field.”

UChicago student-athletes are some of the hardest workers at this school, and Jovanovic is a prime example as a well-rounded woman who has wholly succeeded in her four years here.  In addition to her athletic accolades, Jovanovic was also recognized as a Capital One Academic All-District selection, as well as an NSCAA College Division Women’s Scholar for the All-North/Central region.

The last words she wanted to leave the school with are, “Wear your Maroon pride.” Being a Maroon was a grand experience for her, and she wishes the same will be true for all student-athletes at UChicago for years to come.