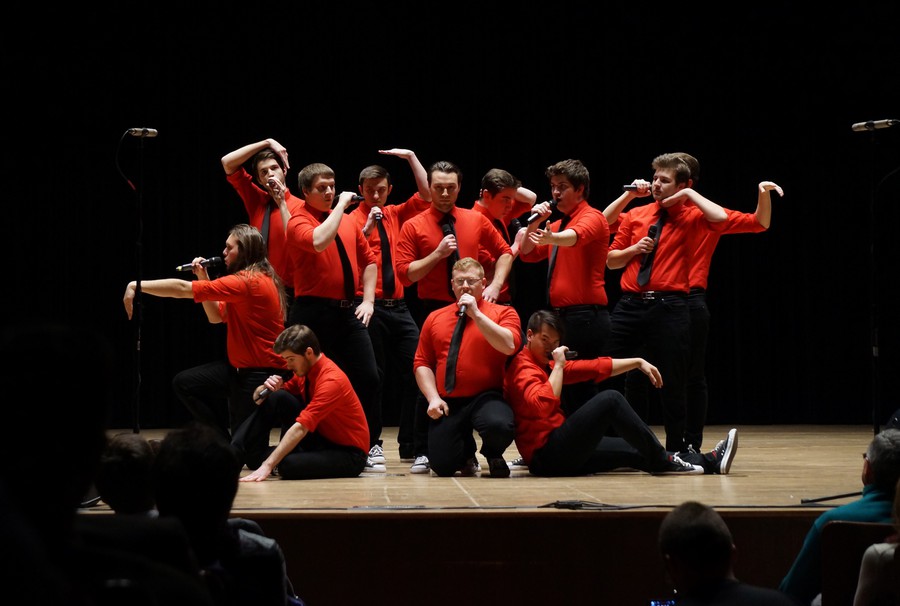 Before there was Pitch Perfect, there was Varsity Vocals’ International Championship of Collegiate A Cappella (ICCA). The rivalries in ICCA competitions inspired a book, which later inspired the movie and pop culture phenomenon. A cappella has gained a massive following in the two decades since ICCA started, and the stakes and competition have risen with the growing attention. Audiences and judges expect increasingly sophisticated song arrangements and performance quality—a group has to be nearly professional to win the ICCAs.

Last year, the University of Chicago’s own Voices in Your Head took second in the ICCAs, and this past Saturday, they hosted the Great Lakes Quarterfinal, the first step for hopeful a cappella stars.

Ten groups from the Great Lakes area competed on the Mandel Hall stage, each with exactly 12 minutes to convince the judges that they were good enough to advance. Only the top two groups go on to the semifinals in March. When each group walked onstage they faced a sold-out crowd and probably one of the most nerve-wracking performances of their lives.

A nervous hush filled the theater, broken only by thunderous applause. The audience was caught up in every detail of performances; made up of mostly friends, family, and other a cappella singers, their empathy and awe were expected.

Each group brought something unique to the stage: stellar solos, dope dance moves, exceptional expressiveness, or even songs in a multitude of languages. Rhythm and Jews competed for the first time, garnering laughs and cheers with their opening parody cover, “Talk Yiddish to Me”; Run for Cover followed up with a set that evoked everything from choir boys to rock-and-roll heroes; Men in Drag brought the crowd to its feet with a thickly harmonized rendition of Halsey’s “New Americana”; and The Ransom Notes used slick choreography to its advantage, bringing its songs to life.

When the judges strode out of the theater to deliberate, it was clear that while there were some particularly wonderful performances, any one of the groups could’ve walked out disappointed.

During the wait, Voices in Your Head surrendered its announcing duties just long enough to perform its victory set from the 2015 ICCA finals, including a microphone-less version of fan favorite “Heroes Listen.” They also invited a surprise guest—Jae Seo, a young but very talented second-year vocal percussionist—to the stage for a solo set that brought the audience to its feet.

More than a hundred singers filed onto stage during Voices’ final song—a menagerie of colors, once competitive but now united. As the awards were announced, joyful tears and embracing filled the stage even within groups that did not advance; they accomplished something great.

The quarterfinal champions were still weeping as they picked up the microphones one last time. Halfway through Paramore’s “Misery Business,” the soloist turned her back to the audience and reached out to her friends. Facing the crowd again, she sang through her tears: “Just watch my wildest dreams come true.”