Maroons Compete in Field of 32 at Pete Willson Invite 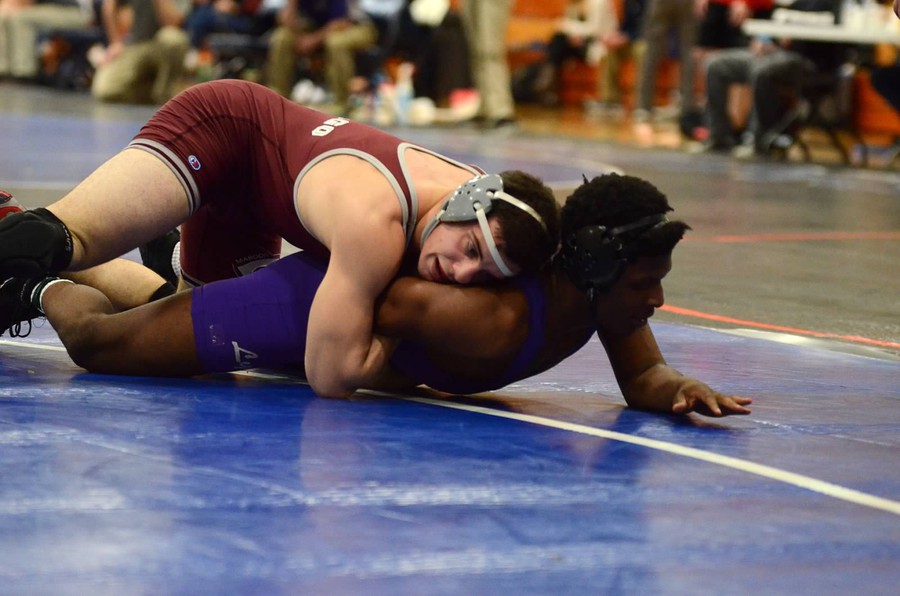 Third-year Paul Papoutsis competes in a match earlier this season against Elmhurst.

This weekend the University of Chicago wrestling squad is set to travel to Wheaton college for the annual Pete Willson Invitational. The Maroons will be one of 32 teams participating in the largest small school wrestling tournament in the country. While UChicago finished 21st of 32 teams last year, they will certainly be looking to improve in 2016.

Currently standing with a record of 3–8, the South Siders will go into the tournament trying to overturn a string of unfortunate results, including its most recent loss at Elmhurst College, placing them sixth of 11 teams at the Elmhurst Invite. The Maroons got off to a great start against the Bluejays, taking a lead of 9–0 with wins from second-year Devan Richter and first-year Louis Demarco, but Elmhurst was able to take the last seven of eight matches. Third-year Paul Papoutsis salvaged UChicago’s third win of the day, but ultimately Elmhurst came out the victors to a score of 37–12. Richter was later announced the UAA Co-wrestler of the Week, providing the team with some positivity after a rough result.

With a relatively young roster this year, featuring only seven upperclassmen, the team has had to rely on strong performances from the first- and second-years. When asked for his thoughts on the underclassmen’s performance so far in the season, Papoutsis discussed two first-years he thought had transitioned well into collegiate wrestling:

“Pat Mulkerin has recently bumped up to heavyweight, so I am excited to see how he competes at this larger weight class. He is pretty quick, which should serve him well, but he is a little light so it will be interesting to see how he does.”

When asked for the keys to success for the team this weekend, Papoutsis continued, “The team is going to have to be really focused on the techniques we have been practicing the past couple of weeks. There will definitely be some tough competition, but if we focus on being tactical I think we can have a good showing on the podium.”

Speaking more on techniques, he emphasized second-year Nick Ferraro’s technique, saying, “I am especially excited to see Nick Ferraro utilizing the front headlock to his advantage. I think he has a really good chance of placing”.

Bright and early Friday morning at 9 a.m. the Maroons will be at King Arena for weigh-in and skin check. Wrestling starts at 11 a.m. The 32 teams will then compete Saturday at 9 a.m. with the championship, third-place, and fifth-place matches beginning at 12:15 p.m.