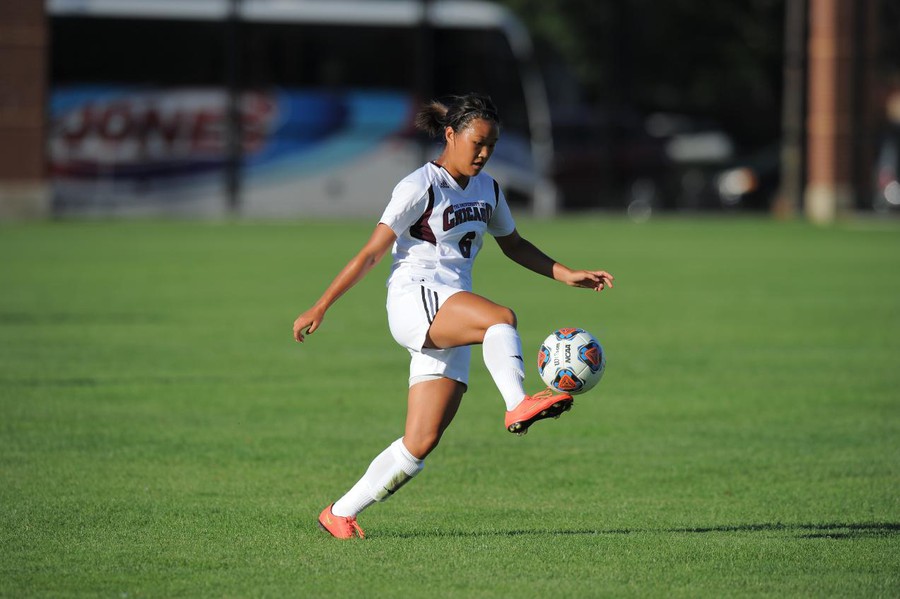 Fourth-year Sophia Kim taps the ball to herself as she gains possession.

The Maroons (14–1; 3–1 UAA) enter this weekend ranked first in the region and look to continue their dominance in the UAA. A sweep this weekend would leave the Maroons at the helm of the UAA standings with only one game to go at Wash U the next weekend.

The top position in the UAA currently features Chicago and Carnegie Mellon tied for first. Thus, Sunday is guaranteed to be a gloves-off fight, the winner taking over first place in the always competitive UAA conference. With only three games left in the regular season for the Maroons, this weekend represents an opportunity to solidify their postseason position.

The South Siders are the team to beat down the stretch, having absorbed only one loss this season. Fourth-year captain Lily Wolfenzon spoke to the weight of this weekend’s games. “We are tied for first with Carnegie in UAAs and the target on our back is only getting bigger, so there's no doubt that we will come out ready to play our hardest in every game,” she said.

The Maroons are eager to take a win from Carnegie. While Chicago leads the all-time series 12–7–5, the South Siders have only won two of the last 13 meetings. But the team knows it has to play its game and solidify a win Friday before it can focus in on the gravity of Sunday’s match. While Case doesn’t pose as much of a threat, it has played quality ball all season and is looking to take one from Chicago. The target on the Maroons’ back is huge and only growing with everyone looking to end their season with a big win.

Coming off a weekend of non-conference games, the squad is feeling ready to take on the last stretch of the season strong. It has been consistently improving as the season has progressed, everything clicking at the right time. The Maroons plan to stick to the style of play they’ve been playing all season, perhaps as to not mess with what has worked for them so far this year.

“We’re gearing up for the last three games of our conference play with Case and Carnegie this weekend and then Wash U the next week,” Wolfenzon said. “This past weekend we had two non-conference games that gave us a huge confidence boost going into this challenging double UAA weekend. This week at practice we are focusing on sticking to our same game plan of building up through the middle of the field quickly and pressing early on from the start of the game, no matter who we are playing.”

The Maroons lace up at Case Western Reserve 4 p.m. on Friday and at Carnegie Mellon 9:30 a.m. on Sunday.