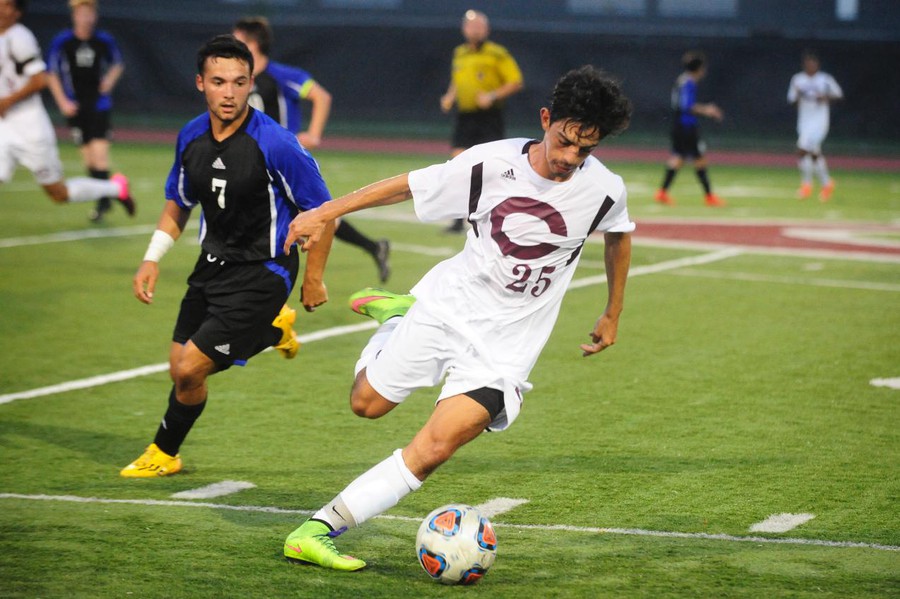 Second-year Juan Barrero attempts to kick the ball up the field.

UChicago men’s soccer team, ranked third nationally, continued its historic season last weekend, beating conference opponent Emory 2–0, extending its winning streak to 11 games. The win marked the team’s first conference win of the year, and it now boasts a record of 11–0–0 on the season, a start that is undoubtedly the best in school history.

The match was pretty even throughout, as Chicago barely edged Emory 6–5 for shots in both halves. However, the big breakthrough came nearly 20 minutes into the game when fourth-year forward Brenton Desai capitalized on an Emory defender’s mistake and drilled the ball into the top corner for his fourth goal of the season.

“[Emory’s] outside back was trying to play a big long ball switch but he mis-hit the ball, and it sliced over to me about 25 yards out,” said Desai, who now has scored 28 goals in his UChicago career, good for sixth in school history. “I took my first touch just out in front of me towards goal and struck it clean, perfectly into the upper corner. It was definitely one of my best goals at this school.”

Inspired by the fourth-year’s marvelous play, the rest of the team put up a wall in order to shut down the Eagles attackers for the rest of the game. Fourth-year goalkeeper Hill Bonin stopped all three shots directed on net and posted a clean sheet on the day. The performance marked an impressive return to form for a Chicago defense that had ceded a season-high two goals in its previous match against No. 19 Carthage.

“It meant a lot for our defense,” Desai said, “especially because they had an onslaught at one point in the game where our defense had to come up big multiple times in a row to keep the ball out. Hill also made a couple good saves to keep us alive and to keep the important shut out.”

While a win over Emory is an important step toward securing a conference title, UChicago now arguably faces its toughest test of the season as it gears up to face No. 7 Rochester this Saturday. Combine the conference implications of the match with the pressure to stay undefeated and the Maroons have some lofty expectations waiting for them.

“The goal is basically to stay humble and maintain the mentality that we have something to prove,” Desai said. “We know that at our best, no one can stop us, so we're all just trying to be at our best mentally for every game by giving each match its own importance.”

The Maroons will square off against the Rochester Yellowjackets at Stagg Field on Saturday, October 8. Kickoff is scheduled for 1:30 p.m.