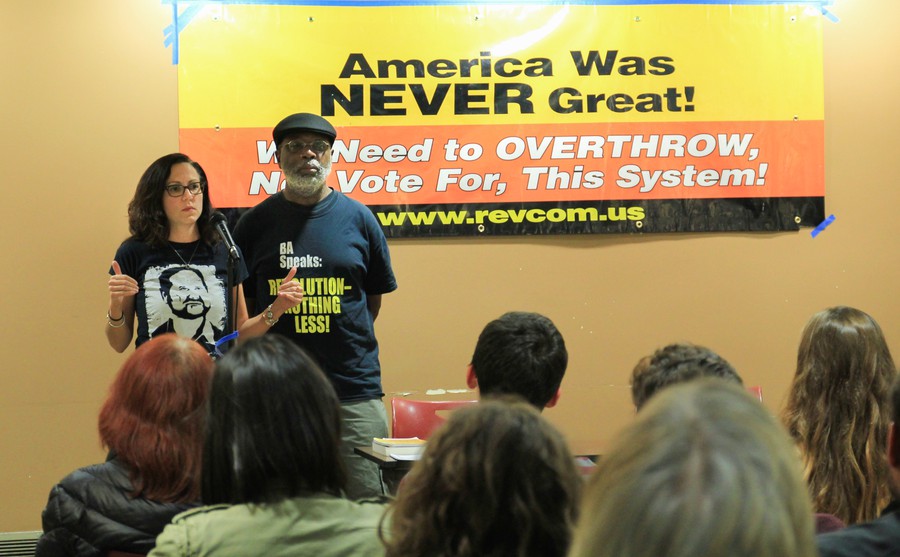 Carl Dix and Sunsara Taylor explain the approach of the Revolutionary Communist Party.

Noche Diaz, a member of the Revolutionary Communist Party (RCP) who was arrested last Wednesday, will come to speak at the University of Chicago this Tuesday.

The event is intended to challenge Diaz’s ban from campus. The RCP stated on the event’s Facebook page that the ban is “illegitimate and will not be respected.” The RCP is a Maoist organization promoting “real revolution” in the United States. It has protested on campus for several weeks as part of a national tour.

The University of Chicago Police Department (UCPD) arrested Diaz for trespassing after he stood on a table in Baker Dining Commons during an RCP protest. He has since been released, but is still barred from visiting campus.

The event was first announced at an RCP talk titled “America Was Never Great! Overthrow–Don’t Vote for–This System!” held in Stuart Hall on Thursday. Sunsara Taylor, a writer at the RCP’s Revolution newspaper, and Carl Dix, a founding member of the RCP, were the main speakers. The Platypus Affiliated Society, a campus organization for the “critique and education towards the reconstitution of a Marxian Left” sponsored the event.

The talk dealt mainly with the goals of the group and its guiding ideology, denouncing the political system of “capitalism-imperialism” of the United States and calling for an RCP–led revolution. They promoted The New Communism by Bob Avakian, the chairman of the RCP.

Diaz will be on campus at 3 p.m., at a location to be announced.

Diaz was arrested by the UCPD and banned from campus property last Wednesday for trespassing.