Something to Write Home About

Stories by non-white authors are unfairly perceived as mere narratives of otherness. 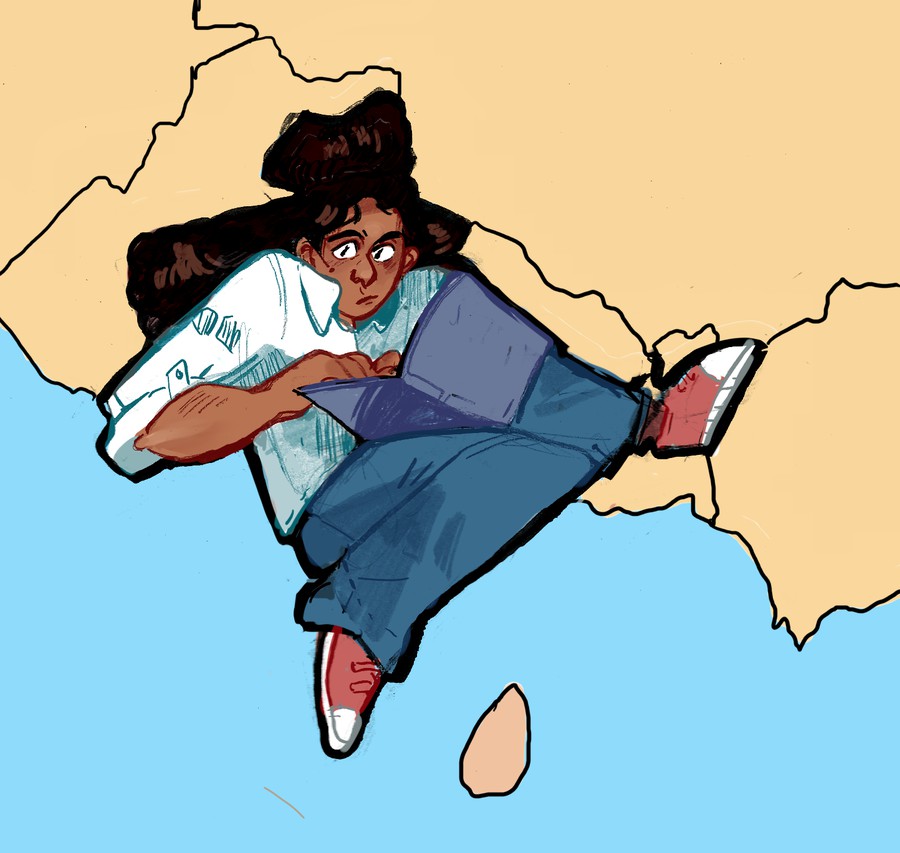 I’ve wanted to become a writer for as long as I can remember—since the second grade, before I even knew what that meant. Back then, someone asked my chubby-cheeked English teacher how to study for tests in school, and she said something that’s stayed with me ever since. There’s nothing to memorize, she told us. Just read the words and let them stick.

Now, 19 years old and clinging to that ambition more tightly than my seven-year-old self could fathom, things are so much more complicated. Every word feels like a step toward a great unforeseeable future. Every word is heavy with the weight of what it could become. Every word is a reminder that my formerly childish fantasies are finally inching their way toward reality.

Things are complicated even beyond the pressures of just wanting to create something worth reading. I’m not a white man. I go to college in a country that is across the world from the one I grew up in, but location is the least of my worries. My accent jars against the smooth harmony of American voices, I’ve never felt more isolated by standards of beauty, and no matter how much UChicago seems to embrace diversity, sometimes I just don’t belong.

When I’m in Chicago, my bones ache for home, for Calcutta’s fish-scented streets and orange-colored skies and dirty dhabas. India isn’t an easy place to love. It’s an easy place to exoticize, or visit, or take Instagram-worthy pictures in. But it spins on the wheels of corruption and colonialism and communalism, it was born of both violence and freedom, and it nurtures its bigotry under the garb of tradition. Its people, however, are resilient and beautiful and worth more than we are told. Its history is nuanced and glorious and dark all at once—we are so much more than our poverty, or our dance routines, or the color of our skin. We are everything—at once impossibly Anglicized and yet inextricably Indian, both dizzyingly urban and helplessly rural and everything in between. There is so much to unpack that I don’t know where or how to begin.

Coming here felt alienating at first, but not because people were unwelcoming. Fitting in was hard enough by itself, but add to that a heavy dose of homesickness, and “international” just didn’t sound all that glamorous anymore. I was disconnected from home, from my family, from my friends. I felt like I was made up of in-betweens.

A solution of sorts presented itself to me at the beginning of fall quarter this year. I found that I could involve myself in more conversations relating to my upbringing in India. It was an easy pattern to slip into—my conversations became longer and interspersed by fewer awkward lulls. It almost seemed as though I fascinated people. “How does one get here all the way from India?” someone asked, eyes wide with surprise. I always acquiesced to questions, answering them patiently, ignoring how startling my foreignness was to some people. Memories of these conversations unsettle me now. Was I selling out my own country? Was I appropriating my own culture just to make friends? When did I, one person, become some kind of authority on the entirety of India?  The answers are unclear. On one hand, my experiences are very Indian, and by virtue of that, uncommon at UChicago. They make me who I am, and expecting to not talk about them is ridiculous. But on the other hand, was that all I was—an Indian in America?

The Indian-in-America narrative, understandably, informs my work and my thoughts.  But when I began writing in a different setting, it seemed like it was the only subject I was supposed to write about. My writing had to be about my “interesting and unique” experiences, experiences that were necessarily Indian. An invisible guiding hand was holding mine, telling me that writing about identity and foreignness was the only way forward—it was all people wanted to read from me.

Blind to the implications of this pressure, I tried harder and harder to craft stories around Indian-ness, and everything felt skewed and contrived. But this summer, when I was back at home reflecting on my writing, a striking problem emerged for the first time in my consciousness. Who decided that my experiences were “interesting,” while American experiences were “normal?” And it wasn’t just me— specific categories of literature, like immigrant stories and Asian-American literature, merely perpetuate the existing racial hierarchy. Once, I found a novel whose back cover proudly instructed readers to buy it if they were interested in South Asian experiences. Are the experiences of the writer only worth reading by virtue of their South Asian-ness? Do all South Asian stories need to be preceded by warnings? Stories by white authors seem to fall into the realm of the regular, necessarily creating the exotic, foreign “other.” To me, and to countless other Asian writers, these categories simply sound like ways of yelling to the reader, “these are non-white stories.”

I also didn’t want to be crafted into a glorified representative for my whole culture. Saying I know everything about India is laughable—no one knows everything about India. Why should my writing be treated as some kind of enlightening insider’s view into India? Why should people reach for writers of color only in order to embrace diversity? I understand and fully endorse the need for more diversity, but it seems more and more like an empty, tokenizing gesture. Why does diversity not mean simply more stories about non-white people? Why doesn’t it mean reading stories by white and non-white people without compartmentalizing them? I don’t want my work, now or in the future, to exclusively fit into some kind of South Asian literature category. I want it to simply be—to be an authentic narrative from a real person like any other white writer.

Often the stories we do see from marginalized writers are ones of pain and anguish, as explained in Jenny Zhang’s brilliant essay on writing as a person of color. People of color so often become reduced to nothing but their stories of suffering. While I don’t dispute the necessity of narratives about subjugation, I too, began to feel like I could only write about the struggles that come with brown skin. In a twisted, unconscious manner, I was combing through my life for instances of my own oppression—whether or not it was what I really wanted to write about. Somehow, as she argues, the voices of people of color become relevant in the public domain only after they have been battered and discriminated against. Zhang asks a question I can’t help but echo: “Where are my carefree writers of color at?” And more disturbingly, why does no one want to read them?

I was fed a postcolonial palette of Enid Blyton and Roald Dahl as a child, and I discovered Indian writers much later. They almost always fell into a corner in my favorite bookstore labeled “Indian Literature,” a category I readily accepted until I realized that’s what I would become too. Stepping outside my comfort zone has convinced me of one thing: We desperately need more spaces for the diverse stories of the less privileged, to push back until we dismantle this hegemony of “mainstream” and “niche.” I am Indian and a student in America and a woman, and my multiple identities collide and merge inextricably. None of these alone determines who I am; I can’t be divided to fit into neat little boxes. The stories I want to tell don’t fit into neat little boxes either, carved out of the places that no one ever visits. We, and only we, should write our own stories—the stories of the less heard and barely seen. Louder than a scream and quieter than a whisper, I wait for the day our voices will ring out and resonate in the old and the young and the new, and maybe even in the forever.

Urvi Kumbhat is a second-year in the College majoring in English and political science. She is an associate editor of the Viewpoints section.