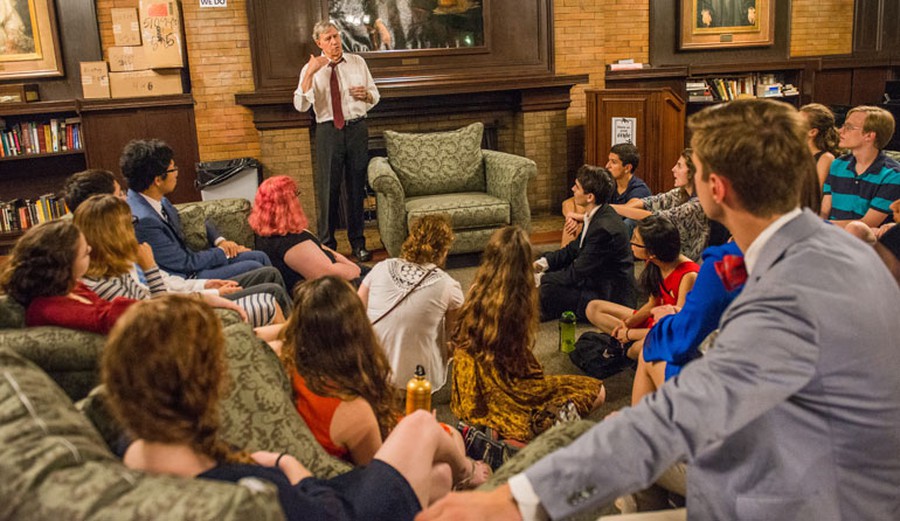 Stone talked to Snell-Hitchcock residents in a small forum after giving his speech.

One of the University’s most prominent advocates of free speech focused on the issue in his rendition of the annual Aims of Education address last week.

The Aims of Education speech is an annual tradition of the University that started in 1961. Every year a faculty member is invited to address the incoming first-years on their views on the aims of a liberal education.

When professor Geoffrey Stone was invited to be this year’s speaker, Dean of the College John Boyer suggested that the speech be focused on the subject of free speech, according to an email from Stone. Stone is a prominent First Amendment scholar and was one of the seven faculty members who drafted the 2014 University of Chicago report on its stance on free expression.

A letter about freedom of speech and academic freedom written by Dean of Students John “Jay” Ellison to incoming first-years in late August prompted strong reactions on and off campus.

Stone’s speech directly addressed the issue of trigger warnings and safe spaces that sparked controversy in Ellison’s letter. While Ellison made clear the University “[does] not support so-called ‘trigger warnings,’” Stone emphasized that judgments to give trigger warnings should be left to each individual and that such judgments were at the core of academic freedom.

A statement by the University News Office after the letter was released also emphasized the importance of faculty autonomy in deciding how to accommodate students in the classroom.

However, Stone echoed Ellison’s sentiments in rejecting the notion that the University be a safe space. He celebrated the presence of the University’s broad array of student organizations such as the Asian Student Union, the Organization of Black Students, and Students for Justice in Palestine, stating that “they are meant to be empowering, intellectually robust and, when necessary, safe.”

Nevertheless, “what is clear, as I noted earlier, is that the University of Chicago does not itself aspire to be a safe space that shields members of our community from challenging, difficult, and sometimes unnerving issues and arguments,” Stone said.

Stone’s speech highlighted the University of Chicago's history of upholding academic freedom, and asserted that students and the University were responsible for continuing that tradition.

Only when heated debates arose between traditional creationism and Charles Darwin’s theory of evolution did academic freedom overcome the dominance of religion and “doctrinal moralism,” under which the worth of an idea was judged by the moral values embraced by an institution’s leaders.

Even so, Stone said that academic freedom has constantly been challenged, beginning with wealthy trustees who felt their business practices were being questioned, then by patriotic zealots in World War I, and by McCarthyism during the Cold War.

Stone said that freedom to question, challenge, and inquire should not be taken for granted and that “academic freedom is, in fact, a hard-bought acquisition in an endless struggle.”

In outlining the University’s role in upholding academic freedom, Stone brought up past presidents and students. He mentioned President William Rainey Harper, who was caught in the middle of bitter conflicts between trustees and professors, as well as the students who traveled to Springfield to oppose the “Broyles Bills” in the age of McCarthy. Stone also mentioned the 2014 University of Chicago report on freedom of expression on campus, which has been lauded by prominent media organizations and adopted by a range of other colleges and universities.

Stone listed three imperatives for students and the University today: the importance of civility and mutual respect; encouragement of free, open, and robust debates; and recognition that the cost of free speech most often falls on the most marginalized groups.

Stone also gave an Aims of Education speech in 1995 on the topic of free speech on campus, which was heavily drawn upon in his speech this year. Stone replied in an email that the 1995 speech dealt with the same theme and that it made sense to reuse parts of the earlier speech that were still relevant today.

The panel continued the debate sparked in August by a letter to first-year students condemning trigger warnings.

Chair of Free Expression Committee Will Give Aims of Education Address