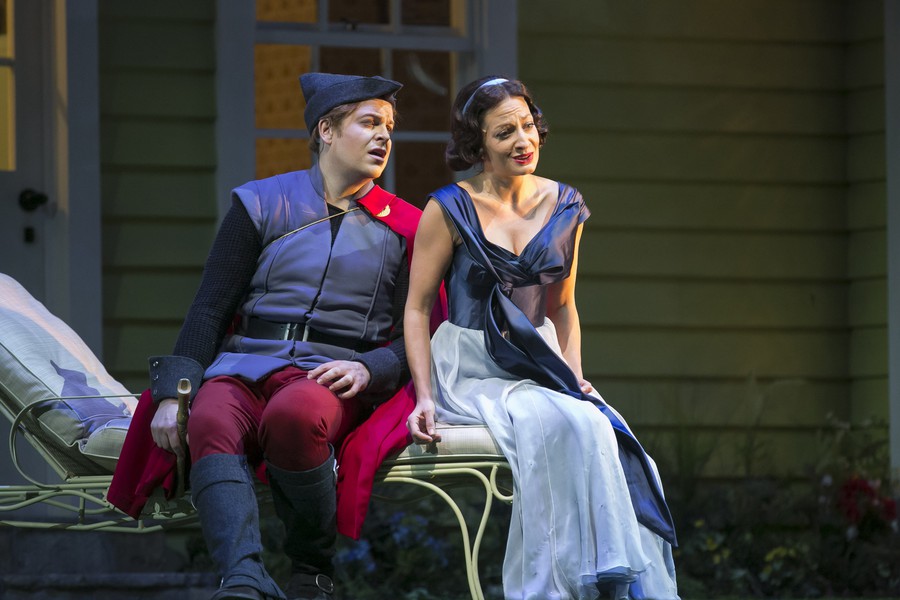 Originally premiering in 1791, Mozart’s Die Zauberflöte (The Magic Flute) has stood the test of time. Last month, the famous singspiel returned to Lyric Opera’s stage, and unsurprisingly, it had little difficulty drawing in massive crowds. Though this tale of trial, enlightenment, and love is timeless, it nonetheless contains lines aimed at a very different generation. One such line condemns all women for gossiping; another warns men to be wary of female deception. Ideally, modern audiences can view the sexism in Schikaneder’s libretto as a reminder that even the greatest artistic minds were undeniably engulfed in the backwards societal standards of their time.

When this opera is performed today, it presents a formidable test for directors. Lyric’s Neil Armfield had to interpret the opera so that it was true to its original intent but meaningful to a contemporary audience, be it through mitigating problematic language or determining the production’s overall visual aesthetic. Some of these challenges were handled successfully, others not so much.

As the ornate curtain rose in the Civic Opera House last Tuesday night, the audience was greeted by an entire house mounted to the center of the stage. For some, this was a very confusing sight. Apparently, I wasn’t alone in thinking that the house would somehow “swing” open and reveal the set of the opera inside. This “swinging” never happened, and stranger still, the entire house rotated on a 360-degree circular plate of what looked like artificial grass. The opera took place in and around the house, stylized as a backyard neighborhood get-together with kitschy homemade costumes, props, and set pieces. The setting of the show—a kind of 1950s get-together for a tight-knit suburban community—seemed cute but jarringly out of character. The performers were apparently playing the roles of regular neighborhood residents who had come together for a night of Americana-style entertainment in a friend’s backyard. The costumes were supposed to have been made by suburban neighborhood children, and they certainly looked like it. They were ugly, to put it bluntly, with misshapen patterns and bland, haphazardly-placed strips of hanging cloth.

However, the singing and acting were phenomenal throughout and paid justice to Lyric’s widespread recognition. But what a surreal experience it was, seeing powerful and dedicated performers prancing around in costumes that looked like last-minute art projects by first graders! The Queen of the Night (Kathryn Lewek) unfalteringly sung the opera’s most famous aria and drew every audience member to a roaring round of applause. Comedic relief Papageno, a bumbling peasant and bird-catcher (Adam Plachetka), almost brought the audience to tears with his physicality and delivery. Other memorable performances included that of the protagonists Tamino (Matthew Polenzani) and Pamina (Christiane Karg) as they tried, against conspiring circumstances, to meet and celebrate their love. The three “wise” children also excelled in their performances, which included a running gag whereby one of them would throw a fistful of glitter into the air every time something noteworthy happened in the plot.

Because the opera contains sustained Masonic imagery, and was heavily criticized upon its release for “revealing” too many secretive Masonic initiation practices, I was satisfied to see that the Masonic symbolism and allusions were not removed from Lyric’s production. Other productions of the opera sometimes lessen or remove its Masonic elements, which disconnects the opera from its original meaning. I was especially gripped by a moment in the production when actors who had been mere “observers” of the backyard show joined the others to perform a huge Masonic ritual. It was as if the performers had made a symbolic switch from insular suburban community to one devotedly showing off its values to the “world,” the audience.

In short, Lyric’s The Magic Flute was a wonderful testament to the ways in which one can imagine and inhabit the world of Mozart, though Armfield certainly stumbled on key challenges in staging it. I recommend that everyone who is able should see this production, though not for the unorthodoxy of the costumes or set design.

The Magic Flute will play at Lyric Opera of Chicago until its final performance on January 27.