Raw, Riotous, and Raunchy, HBO's "The Deuce" Is an Ace 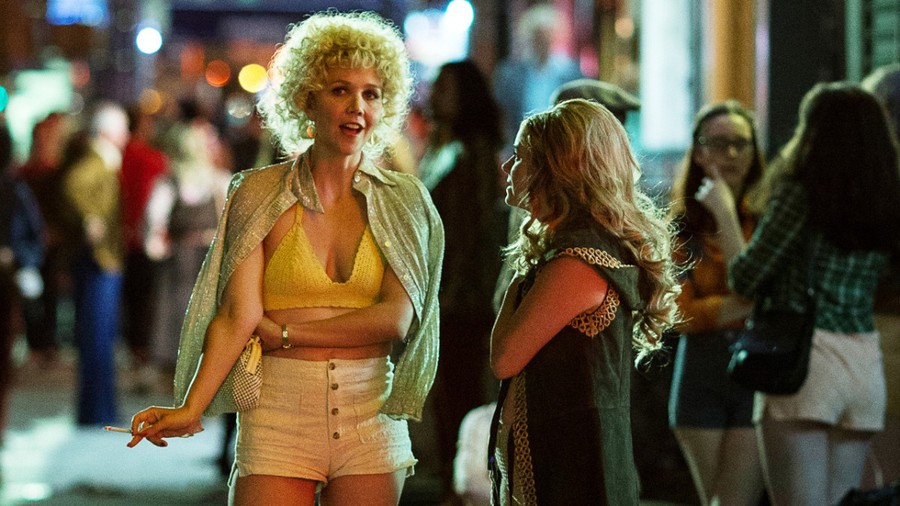 Maggie Gyllenhaal is a producer of "The Deuce" and stars as Candy, an entrepreneurial prostitute in Times Square in the 1970s.

David Simon, the writer responsible for HBO’s critic-beloved The Wire and Treme, faces the curious fate of the successful arts kingpin: He is slowly losing his dimensions. One comment at a time, Simon is ground down from a complex, multi-faceted person into one who can be encapsulated with one word: genius.

As shortsighted (and often silly) as it is to believe that media is the work of an auteur, Simon’s mark on his newest project, The Deuce, is unmistakable. The Deuce explores the blossoming of pornography in 1970s New York, where softening obscenity laws created opportunities to make—and show—longer and more explicit movies than were legal before. In traditional Simon style, the show probes questions local to its setting, like why someone would decide to become a prostitute. But even more quintessentially Simon is its refusal to let these questions become abstract. The show speaks of no one but its characters. We never learn why just anyone might become a prostitute—we learn why Candy (Maggie Gyllenhaal) becames a prostitute. Sort of. At the end of the first season, we’re still waiting for the whole story.

In any event, the answer is inextricable from The Deuce’s twisted, sexist world. It is a world in which everyone literally and figuratively fucks everyone else over. Prostitutes cower before petty, violent pimps. Anyone who skims a few quarters for himself when collecting money from coin machines faces casual, basement brutality from the show’s wide cast of mafiosos. Infidelity is dealt first with screaming, then with retribution. More importantly, though, is that this violence is symptomatic as characters continually compete with each other in twistedly symbiotic relationships. If pimps didn’t have total control over their “stable” of prostitutes, there wouldn’t be such violence. That only works if the prostitutes didn’t need the pimp’s protection when searching desperately, night after night, for enough money to crash somewhere for the day, buy a new fur, and do it all again. For a show often focusing on dead prostitutes, The Deuce seems to have a fairly sunny take on human character. With a few exceptions, people aren’t evil solely for evil’s sake, but mostly for economic reasons.

Those economic reasons cause all sorts of problems. The prostitutes of The Deuce are the most dead-eyed, exhausted, beaten-down collection of characters on the show. While watching, I wondered often why they continued their work if it left them as miserable as they seemed to be. Even Candy, emotionally durable and committed to working without a pimp, shows little enthusiasm for her work, and mostly leaves the trade by the end of the season. Other veterans, including Ruby/Thunderthighs (Pernell Walker), approach their work with more resilience and resignation, but they are the exception, not the rule. Yet there are those who are miserable, either trapped within the system or refusing to leave. Even Darlene (Dominique Fishback), when given a free pass back to her hometown in North Carolina, ultimately decides to return to New York with a new recruit under her wing. There is some je ne sais quoi to the profession—a sticky, oily glamour—that calls these women back, day after day, even when working is the last thing they want to do.

In that way, The Deuce rests a heavy weight on the shoulders of its characters. They are good people, honest and hardworking in the classic American way. Like everyone else, they have to work and find those jobs through the networks around them. So what happens when their networks are based on prostitution, crime, violence, and sexism? Well, just like everyone else, they keep going. Some win, some lose, some take it better than others. But central to The Deuce is the insistence that no one can stop—or, at least, no one knows that they can.

Stuck as they are, it is no wonder that the characters of The Deuce seem so uncertain about themselves. Why do people become prostitutes? The question resurfaces again and again through the show, but is never really answered. To some extent, the answer seems to be that they just are. What is a true prostitute? Is there some way you have to be, or some kind of person? Not really. Characters in The Deuce start new businesses, change lines of work, become kingpins or down-and-outs or fight back against their parents freely and without consequence to their personality or sense of identity. The cast of most interesting characters is out to find themselves: Patrolman Alston (Lawrence Gilliard Jr.) wonders what kind of cop he’ll be, Vincent (James Franco) finds out that he is not the kind of guy who can run a “massage parlor,” and Candy discovers that she wants to be a director. The frequency of these changes implies that these characters were never deeply settled in their identities in the first place. Instead, they were getting by in a system that demands, first and foremost, that you be something. It is both liberating and frightening to watch these characters change, both because we see that flexibility is possible, but also that we might not be what we think we are in the first place.

Questions like this are everywhere on The Deuce. It approaches real life so well that it feels like real life. In the way of good art, you don’t notice for a moment that there is a very clever mind—maybe even a genius—running the show, amping up the contrasts, the through-lines of theme and hints of change. It is a nasty, violent, dirty watch, but it is also a taste of life supersaturated. If you have the stomach for it, give it a try. You won’t feel better at the end, but you might feel a bit more real.