Former Professor Speaks on the Lives of Undocumented Children 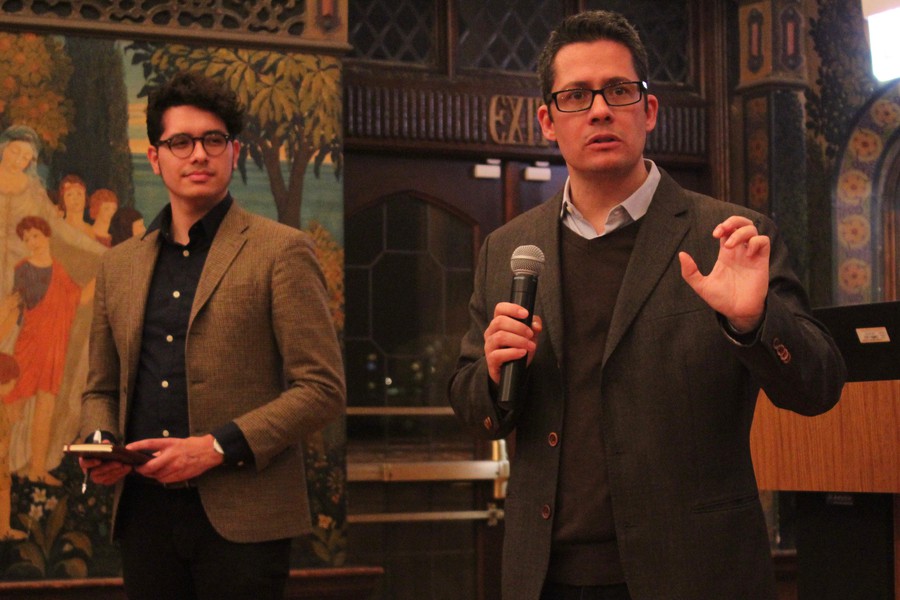 Author of Lives in Limbo Roberto Gonzales shares some of his research on undocumented immigrants at Ida Noyes on February 27.

On Monday, Roberto G. Gonzales discussed his book Lives in Limbo: Undocumented and Coming of Age in America, subsequent research he conducted on the Deferred Action for Childhood Arrivals (DACA) policy, and the current political climate surrounding immigration.

“Living and working with kids and families in that community gave me a real bird's eye view of ways in which larger processes—immigration, policing, gentrification—were framing the everyday world of kids and families,” Gonzales said.

As he worked with undocumented families over the years, he noticed that many of the adolescents in the community were facing difficulties due to their immigration status.

Gonzales praised his colleagues for engaging in progressive work around the protection of undocumented workers, but he conceded that, “There was a blind spot, for many of us in the community—community workers, organizers, teachers and counselors—in dealing with the question, what happens to undocumented kids as they grow up?”

While progressive policy change regarding immigration takes decades to materialize, Gonzales asserted that in the meantime undocumented youth face immediate realities in which they “are left behind” as their American-born friends and peers advance.

Gonzales attributes this lack of continuity in the undocumented youth’s experience to the phenomenon of adulthood illegality, in which the perception of a young undocumented individual changes from an “innocent” child brought over to America against their will, into an “illegal, criminal” adult. He characterized this illegality as a “Master’s Status.”

Gonzales explained that “The master’s status is an old sociological concept, which refers to a particular trait that overwhelms and predominates others.”

Therefore the “illegality” of being undocumented plays a defining role in how the individual is perceived. It becomes the primary identifying characteristic and constrains an undocumented individual’s actions.

His book is based on his extensive study that followed the lives of 150 undocumented young adults in Los Angeles for 12 years. Gonzales divided his subjects in two groups: “college-goers” and “early exiters” who withdrew from the conventional educational track during or after high school.

However, Gonzales found that the trajectories of the two groups converged, due to many implications of the “illegality” of undocumented adulthood. Gonzales characterized this transition to adulthood as “awakening to a nightmare.”

He explained that due to the “illegality” of not having documentation or social security numbers, many young adults in both groups faced “blocked paths and uncertain futures.” They lacked access to critical developmental experiences such as getting a driver’s license or finding a job with a livable wage.

Furthermore, Gonzales described the stigmatization of being undocumented as a “secondary border forcing students to opt out of critical developmental experiences… and affecting relationships and personalities.” He often found troubling patterns of young adults ending childhood friendships and living in further isolation in efforts to hide their documentation status.

“Because of congressional failure, because of policies that aim to discipline or punish…immigration status has become very consequential in a negative way and frame people’s everyday lives. This status is a binding constraint.”

He also found a correlation between documentation status and compromised well-being, after observing many “physical and emotional manifestations of stress” experienced by young people.

Gonzales then discussed his research on the impact of DACA on undocumented adolescence. He discovered that while DACA provided a “delayed transition to illegality,” many young adults still experienced the negative implications of being undocumented as their parents may be undocumented or they belong to families of mixed status.

“We think about the 11.5 million people who are undocumented, 16.5 million living in mixed status families, and none of these people are living in isolation. They have connections to friends, to romantic partners, to employers, to communities of faith. We are talking about a much larger population that is affected by our current policies,” Gonzales said.