Maroons to Continue Momentum at Valparaiso 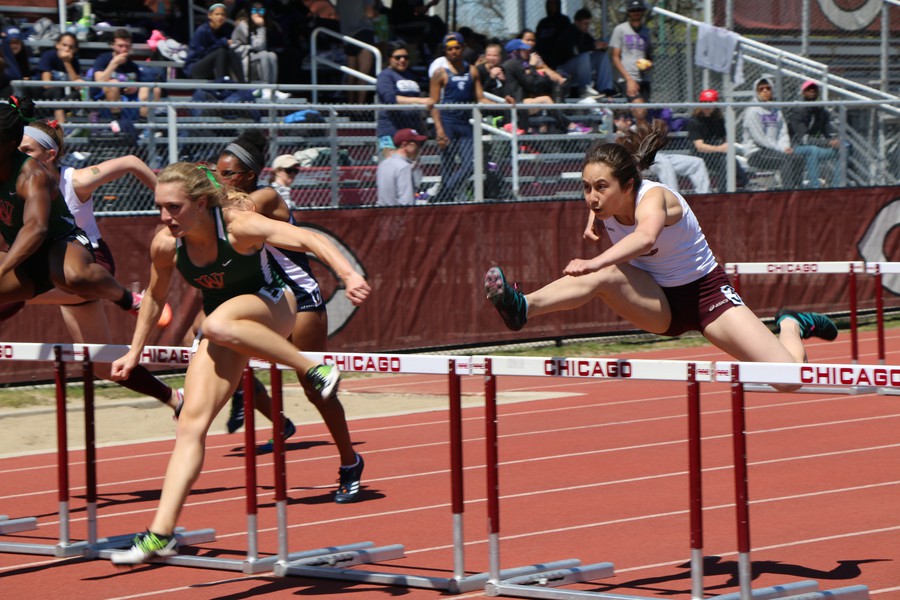 The men’s and women’s track and field teams will be continuing their outdoor seasons by heading to Valparaiso, Indiana, this weekend for the Valparaiso University Crusader Open. Both teams look to carry momentum from a very successful conference meet. The women took second, earning 182.5 points to champion Wash U’s 213.5 points while the men earned fourth place, ending the day with 118 points compared to champion Carnegie Mellon’s 186 points.

The women’s team dominated at home in both track and field events, recording four event winners and 13 All-UAA performances, which are earned by a top-three finish. Third-year Khia Kurtenbach continued her career-long ownership of distance events, winning the 5000-meter race in 17:22.04, an astonishing 17 seconds ahead of the second-place finisher. Third-year Claire Costelloe won the 10,000-meter, and first-year Laura Darcey won the long jump with a 5.60 meter leap. Lastly, third-year Ade Ayoola earned her first conference title in the high jump with a jump of 1.64 meters.

Darcey, who was voted UAA Outdoor Rookie of the Year after her performances during the weekend, credited her success to a number of different factors. “I was disappointed with my performance in the long jump at indoor conference and just missed out on a medal in the high jump, so I was looking for redemption and felt really determined to jump well. I was really inspired by what my coach told us before the beginning of the day. He reminded us that where people are seeded to come means nothing (I was seeded to come eighth), because what matters is what you do on the day. That made me believe that anything was possible.”

The men produced three event wins and six All-UAA performances. Fourth-year Andrew Maneval fittingly closed out his final UAAs with a pair of wins in the shot put and the discus and a third-place finish in the hammer throw. First-year Alex Scott finished right behind him in the discus. Third-year Obinnaya Wamuo won his first-ever conference title in the 400-meter hurdles. The 4x100 and 4x400 relays both placed third.

Looking ahead to the team’s upcoming meets, individuals fall into two camps: those who will probably qualify for NCAAs and those who are still trying to qualify for the championships. Thus, those who are most likely already into NCAAs are hoping to stay fit at these meets while those who are still trying to qualify are hoping to improve their times, jumps, or throws, or simply gain a new personal best. Of the upcoming NCAAs, Darcey said, “I think that my training is finally coming together, and I feel faster and stronger than ever.”