Despite the GOP's pandering, the LGBTQ+ community must resist Islamophobic appeals. 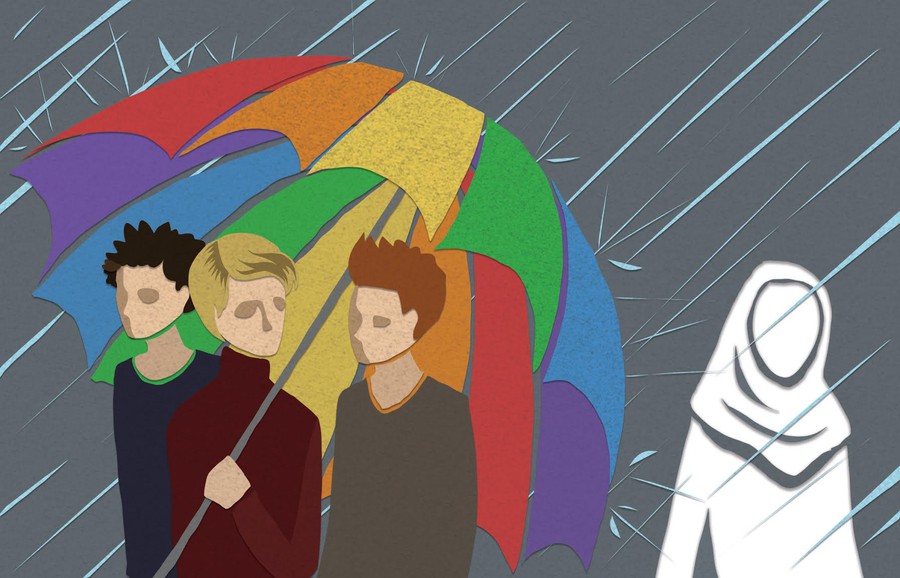 In high school, I was one of those cocksure libertarian Republicans consistently less outraged by predatory lending or police brutality than by the abhorrent violations of the Fourth Amendment that I endured whenever I was forced to take the belt off my cargo shorts in airport security lines. I was very close to turning into one of those gays who whispers “yas, gawd” to himself every time Ann Coulter—proof that good hair can happen to bad people—uploads a picture of herself to Facebook, and most people would have rightfully found me insufferable. I also vehemently defended the right to bear arms on the basis of my own security as a gay man; if I had a gun, it would not matter how homophobic Dirk the Football Coach was!

That phase of my life is thankfully over, but I still have the Email confirming my donation to Log Cabin Republicans and reread it every once in awhile to keep my special snowflake sense of self-worth in check. And unfortunately, the security logic that informed much of my former worldview as a gay Republican still endures today among many in the queer community. Most notably, it has adopted a virulent, repulsively Islamophobic bent. Even those on largely liberal college campuses are not immune from tacitly accepting the right’s increasingly Islamophobic appeals.

The Moral Majority has long since entered its death throes, and even conservative youth are far less hostile to LGBTQ+ rights than the current GOP platform. If the young Republicans of today are any signal of the party’s future, it is only a matter of time before the Republican establishment considers basic acknowledgement of gay rights palatable. In the aftermath of the Pulse nightclub shooting in Orlando last summer, however, some defenders of the Republican Party, in a halfhearted attempt to express solidarity with the queer community it ignored for years, have asserted that the GOP could protect LGBTQ+ people from Islam. This is done in an attempt to mask the current damage state- and national-level Republican advocacy does to queer communities. Twitter trolls regularly barrage progressive LGBTQ+ accounts with pictures of the Islamic State (ISIS) throwing gay men off of buildings in a particularly twisted form of capital punishment. Who, they ask, will protect you from these barbarians? Certainly not the globalist Hillary.

Similarly, Islamophobia was the most jarring takeaway from the spring 2016 Campus Climate Survey report. A disproportionate number of Muslim students, staff, and faculty feel unable to express their religious identity without fear of backlash. After a year of controversies, including the leak of denigrating emails sent by members of the Alpha Epsilon Pi fraternity and a poster campaign likening divestment activists to “Hamas Terrorists,” the far-reaching perception of Islamophobia on campus should perhaps not come as a surprise. Ultimately, the survey’s conclusions made clear that many Muslims on campus do not feel that the umbrella of religious tolerance and COEXIST-ness extends far enough to reach them. As the issue of gay rights may move into the background in the coming decades, the Republican Party’s oft-repeated appeals to Islamophobia may become even more enticing for LGBTQ+ voters.

To be clear, there are varied reasons gay men in particular might vote Republican. You might like Ann Coulter’s hair or be a genuine believer in the power of free markets to allocate resources in a fair manner. But in the words of one absolutely charming former acquaintance, some of them just “don’t care as much about a border wall compared to a halved corporate tax rate,” which is a statement I’m sure sounded completely reasonable when it was probably first uttered in a Lehman Brothers elevator a decade ago. I would exhort other white gay men in particular, even ones on this supposedly tolerant campus, to be sure that any swing to the right they may entertain is not done by means of antagonizing the millions of Muslims who they live with as citizens in the United States. Islamophobia must not be allowed to co-opt the gay vote.