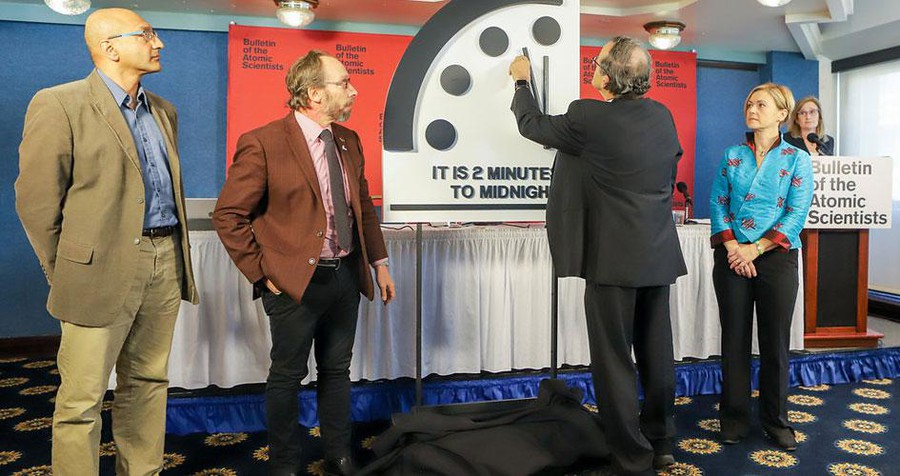 The Bulletin of the Atomic Scientists moved its Doomsday Clock, a symbolic measurement of the world’s urgent vulnerability to nuclear risk, climate change, and disruptive technologies from two-and-a-half to two minutes to midnight. The January 25 announcement signals the Bulletin’s concern that events in 2017 have increased the risk of global calamity.

Headquartered in the Harris School of Public Policy, the Bulletin of the Atomic Scientists formed in 1945 by the very scientists who credibly created the first nuclear bomb as an organization advocating to abolish the nuclear arms that their scientific discoveries now enabled. Many UChicago faculty members have served and continue to serve on the Bulletin board.

“In 2017, we saw reckless language in the nuclear realm heat up already dangerous situations and re-learned that minimizing evidence-based assessments regarding climate and other global challenges does not lead to better public policies,” Rachel Bronson, president and CEO of the Bulletin of the Atomic Scientists, said in her opening remarks at the Doomsday Clock announcement ceremony in Washington, D.C.

While the Doomsday Clock serves as a global measure, many of its considerations in this year’s determination came from political actions taken by the United States executive branch. “In the past year, U.S. allies have needed reassurance about American intentions more than ever,” the Science and Security Board of the Bulletin said in their statement. “International diplomacy has been reduced to name-calling, giving it a surreal sense of unreality that makes the world security situation ever more threatening.”

The board cited the contentious relationship and lack of clear communication between the United States and North Korea as its predominant concern for their perceived increased risk of nuclear warfare. North Korea continues to test nuclear and ballistic missiles, suggesting development of more sophisticated nuclear weapons. Global deterrence efforts have been unsuccessful and North Korea has successfully developed weapons of mass destruction.

In addition to nuclear arms consideration, the Bulletin’s Doomsday Clock decision includes environmental concerns. “In its rush to dismantle rational climate and energy policy, the administration has ignored scientific fact and well-founded economic analyses,” the board said of the Trump administration. Without greater environmental protections, the Bulletin sees current environmental treatment as unsustainable and dangerous for the security of human life.

In their resolve to move the Doomsday Clock farther away from midnight, the Science and Security Board offered solutions to the problems they highlighted. “U.S. President Donald Trump should refrain from provocative rhetoric regarding North Korea,” the Bulletin said. They also believe communication between the United States and North Korea should, at a minimum, include military-to-military communication.

To address climate change, they propose adherence to the Paris Agreement and a greater global commitment to its policies, including the goal to keep global warming below two degrees Celsius. Finally, they suggest the creation of internationally collaborative institutions to research and address the possibly dangerous misuse of new technologies, such as biotechnology and autonomous weaponry.

The clock’s move 30 seconds closer to midnight moves the clock to its closest position to midnight since 1953 at the height of Cold War nuclear tensions. The clock’s longest time away from metaphorical midnight occurred in 1991, when the Bulletin declared the world 17 minutes to midnight after the creation of the Strategic Arms Reduction Treaty and the removal of intercontinental ballistic missiles from the U.S. and Russia.

“The warning the Science and Security Board now sends is clear, the danger is obvious and imminent. The opportunity to reduce the danger is equally clear,” the board said.