UNICEF published the music video for the song as part of its campaigns for displaced and migrant children. 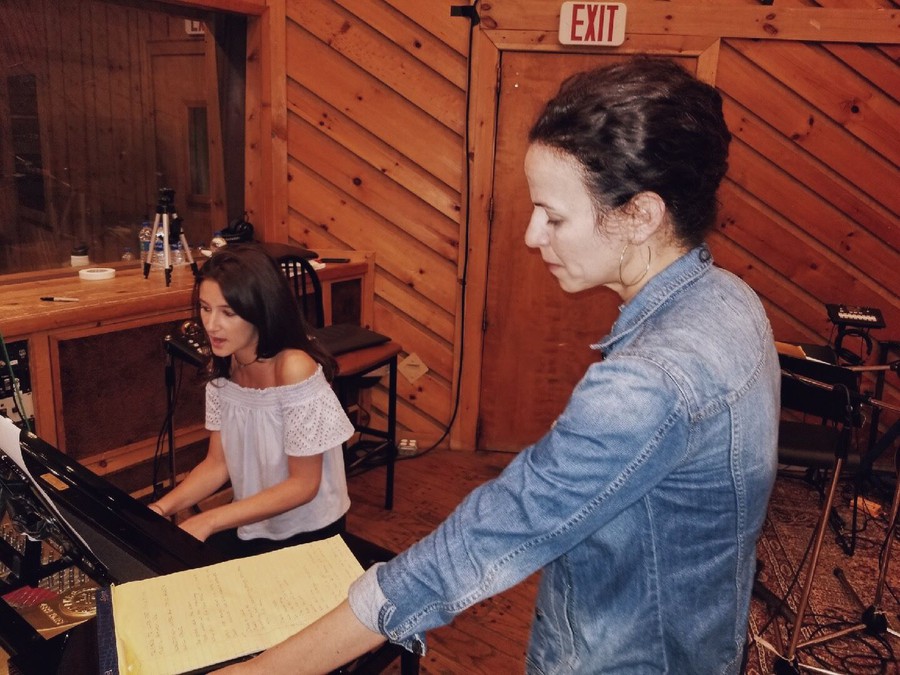 Baxter records her song, “Line in the Sand,” with Hamilton star Mandy Gonzalez.

Earlier this year, third-year Greer Baxter, a Grammy Award–winning producer and musician, wrote “Line in the Sand,” a song about the fraught United States–Mexico relationship that will appear on the soundtrack of a forthcoming documentary text, Fandango at the Wall.

On Tuesday morning, the United Nations International Children’s Emergency Fund (UNICEF) published the music video for the song, which it will use as part of its “Uprooted” and “A Child Is a Child” campaigns for refugee and migrant children.

Baxter first worked as an assistant to Latin jazz musician Arturo O’Farrill in 2015, researching the history of the Cuban musical scene for the liner notes—the informational pamphlet in an album CD—to his album, Cuba: The Conversation Continues. The album was nominated for a Grammy Award for Best Large Jazz Ensemble Album the following year.

She subsequently served as an assistant producer on the album Familia by O’Farrill and Chucho Valdés, working with the sound engineer and providing feedback during recording sessions. Along with the rest of the production team, Baxter won a 2018 Grammy Award for the song “Three Revolutions,” in the category of Best Instrumental Composition.

Most recently, Baxter composed an original song for O’Farrill's latest album, Fandango at the Wall, which is part of a multimedia project about the U.S.–Mexico border. The annual Tijuana music festival, Fandango Fronterizo, inspired the “Fandango” project.

While primarily focused on music, the festival is in many ways a too-accurate political microcosm, depicting the fraying relationship between the U.S. and Mexico in miniature. Since the Fandango Fronterizo’s conception in 2008, changes to the wall itself have seemed the perfect metaphor for heightening tensions to U.S.–Mexico relations.

When the festival first began gathering, the fence was peppered with holes, making it easier for people to speak to friends and family members on the other side of the border. As the fence has become increasingly militarized and reinforced in recent years, however, organizers say it is tougher to communicate across the barrier. “Holes once big enough to accommodate Mexican popsicles or mangoes on a stick have been shrunk,” The New York Times reported.

In April, the album producer of Fandango at the Wall called Baxter and asked her to compose a pop ballad for the soundtrack.

“Even though it was during midterms, I basically locked myself in the Max Palevsky music room for two days straight and came up with ‘Line in The Sand,’” Baxter said.

The song she wrote, “Line in the Sand,” was conceived as “something to remind people of the human stakes involved in the fight over immigration,” Baxter told The Maroon. “It’s about the U.S. and Mexico, but it’s framed as a song about the emotional connection between two individuals.”

After the producer approved “Line in the Sand” for inclusion in the album, Baxter accompanied the crew on a trip to Tijuana to film scenes for the documentary and record most of the orchestral pieces for the album.

Baxter said seeing the border wall in person was a deeply moving experience.

“It really brought home the issue of separated families in a visceral way,” she said. “One thing you notice is that on the U.S. side, it’s just a big, dark wall with a bunch of armed border patrol guards standing around, but on the Tijuana side, there’s so much life and activity, and the wall itself is covered in beautiful, moving murals of children holding balloons.”

Following the Tijuana trip, Baxter was thrilled to learn that Mandy Gonzalez—who currently portrays Angelica Schuyler in the musical Hamilton—had been chosen to sing her song for the recording. Baxter “demoed” the song for Gonzalez at a recording studio in New York, and Gonzalez sang it perfectly on the first try, Baxter said.

“The icing on the cake was that they also asked me to play the piano accompaniment on the recording,” Baxter said.

In addition to Gonzalez, the album features a slate of musician-activists including rapper Ana Tijoux, drummer Antonio Sánchez, the Rahim AlHaj Trio, and violinist Regina Carter.

After the music video was shot, Baxter learned that UNICEF had expressed interest in the song and decided to use it as part of two humanitarian initiatives focused on protecting migrant children: “Uprooted” and “A Child Is a Child.”

Baxter called work on the Fandango project and its subsequent adoption by UNICEF “incredibly gratifying.”