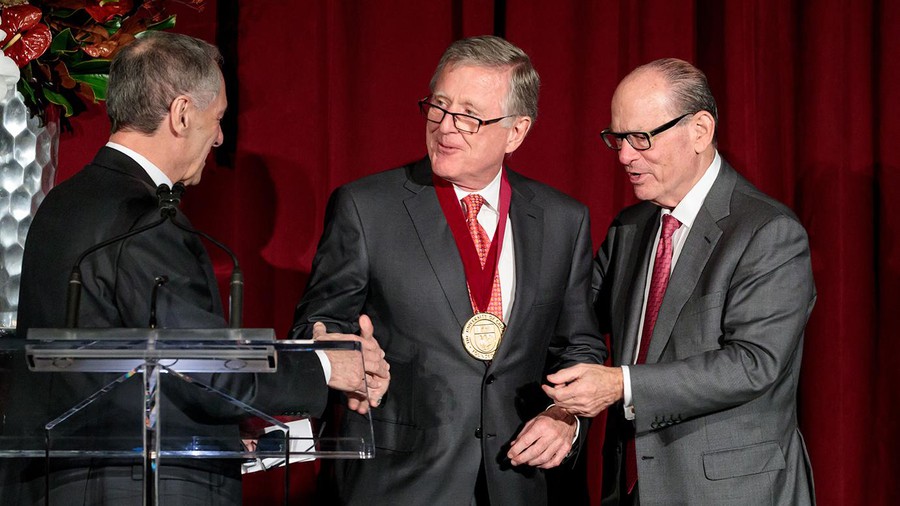 David Booth shakes hands with President Zimmer after receiving the medal from Board of Trustees chairman Joseph Neubauer.

David Booth, M.B.A. ’71, who studied under 2013 Nobel laureate Eugene Fama at UChicago and gave the University the largest donation in its history, received the University of Chicago Medal from the Board of Trustees on November 7 in a ceremony in Hutchinson Commons.

Booth, also a member of the Board of Trustees, is a chairman of Dimensional Fund Advisors, an investment firm he founded in 1981. He served as the firm’s co-CEO until February 2017.

While at the school, he studied under Fama, who has been called  “the father of modern finance” for his research in investment management.

In November 2008, Booth donated $300 million to the University’s business school, which was then renamed in his honor. He previously donated $10 million to help fund the school’s Harper Center in 1999.

According to Booth's profile on Forbes, his current net worth is nearly $2 billion, and he pledged this past May to give more than half of his fortune to charity.

Booth is only the 23rd individual to receive the University of Chicago Medal, which was introduced by then-University president John Wilson in 1967 as a way to honor high-level service to UChicago. Past recipients include economic historian John Ulric Nef and civic leader Florence Lowden Miller.

In a press release put out by Dimensional, Booth credited the business school for giving him the necessary training to create the investing fund. “Chicago’s focus on groundbreaking research and theory has had a tremendous impact on real-world finance and has helped to change the way the world invests for the better,” he said.

“David had a transformative experience as a student at the University, and his remarkable career has demonstrated the power of rigorous methodological thinking and its practical applications,” University President Robert Zimmer said in a news release from the University. “His philanthropy and dedication to Chicago Booth enables a range of important outcomes from field-defining scholarship to ensuring many more students have transformative educational experiences.”