"Intermissions" Takes a Break for Ambiguity

“[The title "Brothers and Sisters"] suggests the possibility that some entities are both brothers and sisters, which makes sense to me since in my life I have been both a sister and a brother.” 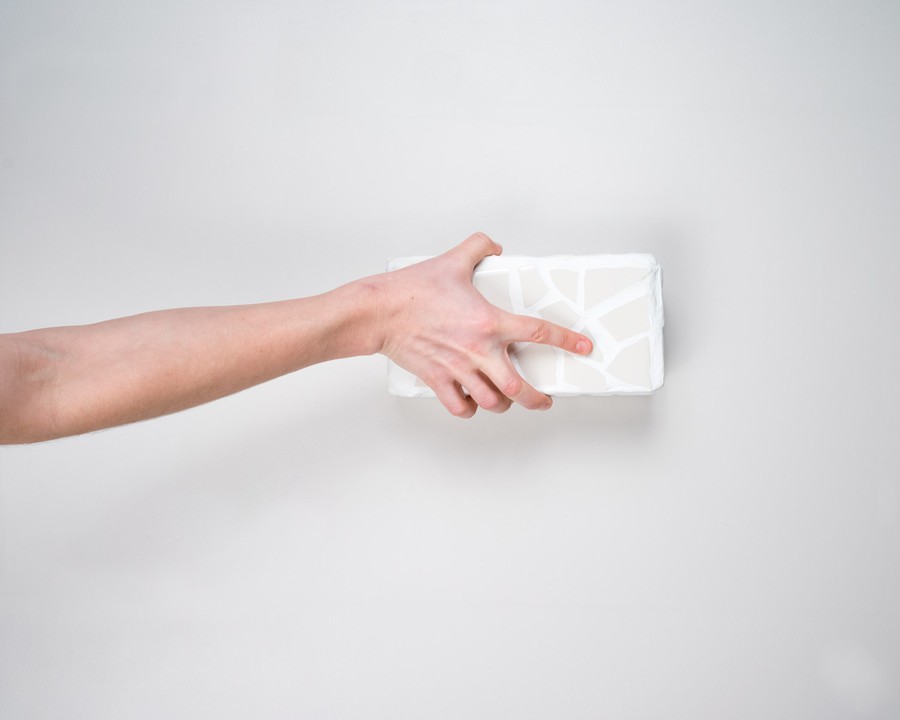 The Renaissance Society welcomed Gordon Hall to the fourth floor of Cobb Hall for the third iteration of its live-performance series, Intermissions, this past weekend. Though based in New York, Hall has exhibited and performed works at institutions across the United States, including the Museum of Contemporary Art in Chicago. Hall’s latest work, Brothers and Sisters, features a variety of components: sculpture, recorded music, live singing, and a dance that was performed twice, precisely at sunset, on both Saturday and Sunday last weekend.

For Brothers and Sisters, Hall created “a set of precisely designed objects of ambiguous purpose, each of which suggest possible uses by imagined bodies,” as stated in the event’s program. These objects included, among others, five long pieces of wood positioned parallel to one another and shaded bright orange with colored pencil, a block of concrete shaped like a soda can and partially painted turquoise, and two seat-like blocks covered in hand-glazed tiles.

When Hall entered the gallery to, in the artist’s words, “put the sculptures to use,” it quickly became clear that these objects are not functionless “things” any more so than the range of objects we encounter in our daily lives. An eerie organ rendition of Bach’s Ich ruf zu dir ,Herr Jesu Christ, BWV 639, bookended the performance component, in which Hall glided around the gallery, as if to explore the human body’s capacity for movement. At various points, Hall mirrored the forms of the sculptures or rested on them, revealing the potential for intimacy and the mutability of relationships between bodies and objects as the line between the two blurs.

Accompanying the performance were bursts of harmony from four vocalists—fourth-years Colin Garon, M. Will Myers, and Kenya Senecharles, and Louisa Richardson-Deppe (A.B. ’17). Their sonorous voices filled the open space of the gallery and seemed to highlight random portions of Hall’s dance.

The ambiguity present in Brothers and Sisters, particularly regarding the relationships of our bodies to the outside world, is quite intentional. In an interview with Temporary Art Review, Hall discussed queerness as “an orientation toward ourselves and one another in which we make the bare minimum of assumptions about the uses and definitions of our own and one another’s bodies and body parts.”

Though the phrase “brothers and sisters” may at first suggest a dichotomy predicated upon gender, Hall sees it as a point from which we can begin to break down these assumptions and reimagine our bodily relationships. The inspiration for the title comes from Hall’s longstanding interest in the Shakers, a Christian sect founded in the 18th century: “They were celibate and lived together equally as brothers and sisters…[It was] an alternative way of thinking about family, relation, and kinship," Hall said in an e-mail interview.

Hall continued, saying that the title “suggests the possibility that some entities are both brothers and sisters, which makes sense to me since in my life I have been both a sister and a brother.”

For Assistant Curator Karsten Lund, part of what makes Intermissions so exciting as a series is the idea of “really welcoming each episode to take on its own shape.”

“Intermissions is meant to be a dynamic series,” he explained via e-mail. An intriguing common thread in the series has been the uniqueness with which each artist approaches the notion of live experience, whether they are “thinking about the role of the audience, the characteristics of our space, the duration, or even the acoustics of the room,” Lund said.

Hall engaged the notion of live experience on multiple levels, one of which was temporal specificity. Hall performed precisely at sunset to capture the grief “of things fading, or ending, surely influenced by the political events of the last year,” and to meditate on “what kinds of beauty are possible in times like this and the crucial role that care for objects and people can play in figuring out ways to survive.” The vocalists also constitute an exploration of live experience: “Since the singers were on a time-score of their own,” Hall noted, “I think there were some differences [in each performance] in terms of when their bursts of voice coincided with my movements, which I was happy to experience both nights.”

Beyond live experience, however, Hall said, “My hope is that the many possible uses for the objects animate them at all times, regardless of whether they are in use or not.”

My hope, after seeing Hall’s work, is that we can continue to break down our assumptions about the physical world around us and see its many possibilities for reconstruction, whether Hall is present to illuminate this for us or not.