Dear Bartlett: A Tale Of a Dining Fall

Cats, a sauna, and a magical fountain are the key to getting Bartlett Dining Hall back up to standards. 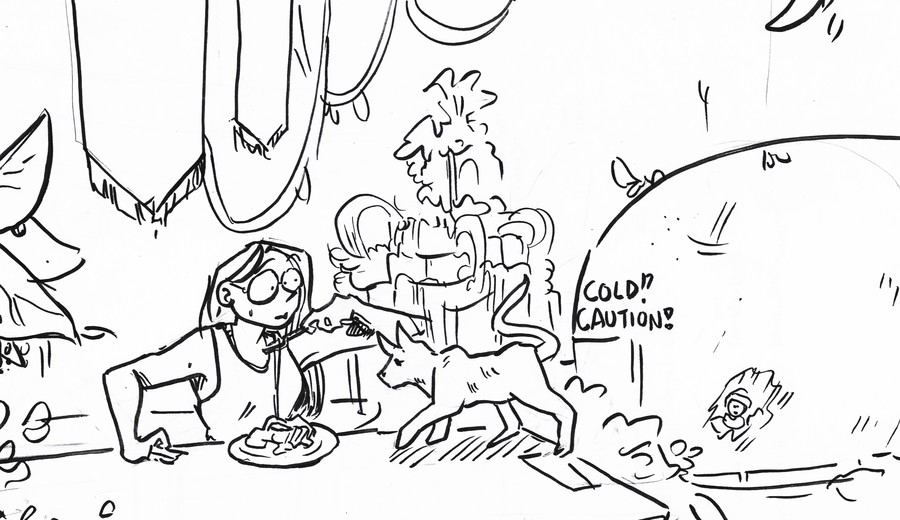 We’ve all heard the hot (or, should I say, the mandatory, food-safe temperature of 140 degrees Fahrenheit) news—Bartlett has failed us once again. The tried-and-tribulated dining hall nearest to the quad failed its April 16 health inspection due to insufficient temperature maintenance, cleanliness, and pest-control measures, according to the report posted on EveryBlock Chicago, ultimately earning a risk-category rating of 1 (“High,” or the equivalent of a D or lower for those with academics on their minds). This is not Bartlett’s first rodeo when it comes to health violations: It failed a health inspection in 2013 for similar reasons. While it passed its reinspection on April 23, 2018, both faith in Bartlett and the general morale of its frequent diners have never been lower as this shocking and moderately terrifying news makes its way through campus. With no comment from the University News Office coming any time soon, I would like to humbly suggest some solutions with which Bartlett may be able to regain the trust of the people and prevent any more of the health crises that plague it so.

Problem: Mouse droppings in the kitchens.

Solution: Cats. So many goddamn cats. Support the local animal shelters by giving their cats a strong, fulfilling career: freeing Bartlett from its rodent problem. Nothing would restore faith in the dining hall like being able to witness the carnage wrought by the Bartlett Cats, in addition to their potential as emotional support for UChicago’s stress-addled population. Sure, exterminators are an option, but that method pales in comparison to the spectacle of a mouse tearing out of the kitchens tailed by a miniaturized apex predator. Critics may point out that this presents a new sanitation problem, but as any cat owner knows, this is far more easily remedied than Bartlett’s rodent issue. Getting as many goddamn cats as humanly possible is truly the only way for Bartlett to demonstrate their commitment to solving this problem and the only method that will last far into the future, much beyond the five or so years it took for Bartlett to earn a new health violation after the last time.

Problem: Food rendered “potentially hazardous” for not being stored at proper temperatures.

Solution: According to the health inspection report, coolers should be kept below 40 degrees Fahrenheit, and hot food must be maintained at a minimum of 140 degrees. As such, in order to be sure foods are at their proper temperatures, all of Bartlett should henceforth be divided into two zones: Sauna and Arctic. Sauna rooms would be kept around 158 degrees or higher; not only would the integrity of the food be preserved, but students would also get a convenient spa experience included with their meal. The greenhouse-like heat caused by the dining hall’s skylights give it a great head start on achieving the necessary temperature. A smaller section would then be reserved for the Arctic zone, where all cold foods would be stored, and students not from California could enjoy their meal at a more agreeable temperature. This would assure students that their food is being stored at non-hazardous temperatures, facilitating a worry-free, similarly spa-like dining experience.

Solution: Remove the food stations in violation of sink protocol and replace them with a grandiose fountain of a sink, so that all can bask in its glory and revel in the knowledge that all hands in Bartlett are being properly sanitized. Picture this: spouts of soap and water, all cast in the ethereal glow of ultraviolet germicidal irradiation lights like the medical-grade sanitation station it deserves to be. Potential design inspirations include Rome’s Trevi Fountain, the Palace of Versailles’s Latona Fountain, or Moscow’s USSR-inspired Friendship of Nations Fountain. With such an incredible public spectacle of cleanliness, none shall ever doubt Bartlett’s commitment to health and safety protocol ever again.

It is my most sincere hope that Bartlett will be able to regain the trust of its constituents in the face of this slightly horrifying news. No resident of a house with a Bartlett table should be forced to make the trek to Cathey out of concern for the cleanliness of their food, or, God forbid, stoop to eating at Baker.

Katia Kukucka is a first-year in the College.