Renaissance Role-play? Count Me In! 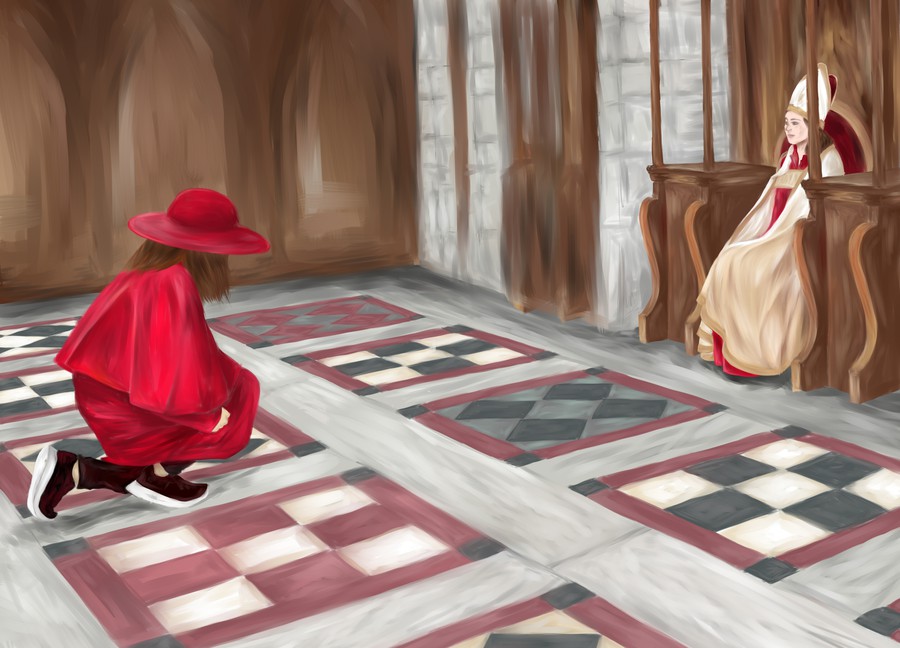 There is only one class at UChicago capable of making students voluntarily vanish from their social lives for two weeks: Ada Palmer’s The Italian Renaissance. This course is (jokingly) infamous throughout UChicago for how much time and effort participants dedicate to it. It invariably has a waitlist, with students who are not fortunate enough to get in typically auditing the first few sessions in hopes of landing a spot. The class, centering on the years 1250–1600, is one of the Department of History’s new “Gateway courses” intended especially for first- through third-year students new to the topic, though many fourth-years enroll. This course is also a great introduction to the new interdisciplinary Renaissance studies minor.

Eight of the 10 weeks are spent in a lecture hall where students learn the events of the time period and context for the class readings, a large portion of which are personal letters between notable historical figures. The class also mostly forgoes “traditional” paper-writing in favor of a creative bent: students write letters impersonating the authors they’re reading, channeling the hopes, fears, and humanity of these individuals. These letters crucially shape the class’ primary takeaway: We laud the Renaissance as a grand “rebirth,” an age of cultural heroes, but those we regard as larger than life—like Machiavelli, Michelangelo, and the Medici—were all too human, with the same virtues and vices as any other human being, and this shines through in their personal correspondences.

Nothing demonstrates this more than the centerpiece of the class, responsible for the aforementioned weeks of social reclusion: a live-action role-playing (“LARP-ing”) simulation of the 1492 papal election. For these two weeks, the class heads to Rockefeller Chapel, dons the robes of functionaries, cardinals, and monarchs, and sets out to elect a new pope. Historical figures are assigned to each student via a survey asking how much time you want to put in outside of class, how difficult you want your goals to be, and whether you want to be cruel or just, among other things. Character sheets are read, Renaissance personas adopted, and it’s off to the races.

Allegiances form before long, and if you find yourself in a group supporting a certain candidate for the papacy or have intensive goals, those two weeks are a long stream of secret meetings, group chats, and letter-writing. You’ll work hard, but the experience is so exhilarating that you won’t even notice how much work you’re doing. Hannah Trower, a fourth-year who took the class in spring 2018, remarked, “Honestly, I’m terrified to consider how many hours I put into the papal election…I probably put at least 30–50 hours of effort into this over two weeks. But that was because I was super invested in it all…I couldn’t let it go!”

Everyone has their own ambitions, and you can never be sure exactly what they are. Many goals hinge on the election of a certain papal candidate to further clandestine agendas or monarchical warmongering.  Subterfuge and plotting against others are the norm; some characters’ shady skills and connections make these morally questionable moves even easier. I, for one, had a successful run as a cardinal and later vice-chancellor, thanks to the victory of the candidate I spent countless hours supporting, all while moonlighting as a youth arsonist wreaking havoc on our opposition (which was great stress relief). Over the course of these frantic sessions, you’ll come to identify everyone by their character names, which makes for some very confusing conversations once the simulation ends and you have to learn the real names of your new friends.

It’s very easy to get invested in your character and the alliances you forge, which made it especially painful when I had to put power above friendship (I’m still being tagged in snake memes). But beyond being engaging, the simulation also taught me an incredible amount about European politics in a short amount of time—which families would always move together, which would sooner burn than be allies, and how I could use these motives or the fire of the Roman mob to swing people to my side. It’s so much easier to learn information quickly when you’re totally immersed (and emotionally invested) in it. As said by John-Paul Heil, a history Ph.D. student who TA’d the class in 2018, “When you hear about this class, it's easy to write off its appeal as ‘students wanting to play dress-up for a few weeks,’ but this simply isn't true. The passion that students have for the class and its content doesn't stem from the election simulation, the class readings, or even from Palmer's ample charisma, but instead comes from the way the class encourages those who take it to enter into a historical mindset. History can only come alive if we give it a living voice, and there's no better way to do that than through full immersion into the past.”

We can view history as something distant, removed, and impersonal; historical figures becoming something more (or less) than human, something better or crueler than any of us could be. But this is not so—they were human, just like us, with their own strengths and flaws. In the words of Palmer, “[The simulation] centers on the effort to cultivate historical empathy, moving out of our modern perspective and trying to see from the perspective of the alien minds of another time and place. It's easy to be judgmental about people in the past when we look back on them from a distance, but when you enter the moment and actually feel what it's like to be on the inside of the power structures of the era, it suddenly becomes possible to see why those structures were so irresistible, much like our own.” When writing and acting as past individuals, history suddenly becomes more understandable, relatable, and that much more personal.

If you want to experience history from a new and totally unique perspective (and maybe commit simulated arson for a grade), take this class.

Katia Kukucka is a second-year in the College.