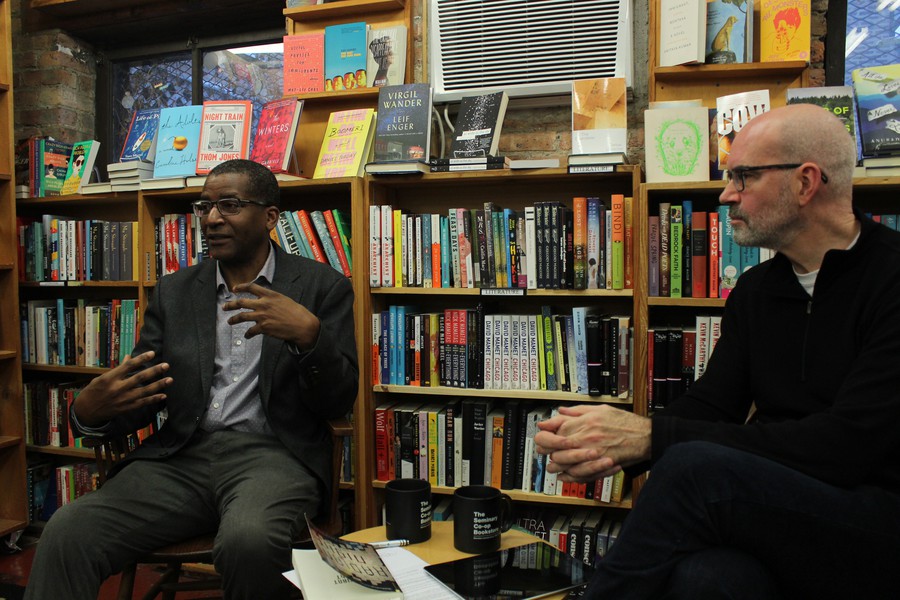 “57th Street Booksand the Seminary Co-OpinChicago’s Hyde Park neighborhood are two of my favorite bookstores in the world" writes Lohier on his blog.

UChicago alum and author Patrick Lohier spoke on Saturday about his recently released thriller Radiant Night. Telling the fictional story of Iraq War veteran Ludwig Mason, the book explores the chaotic experience of life after war trauma. Ludwig struggles to reintegrate into his family and social life with his post-war PTSD, but a journey involving tarot cards and a cross-country trek brings him on a thrilling expedition.

Though not a war veteran himself, Lohier immersed himself in the mind of his protagonist by conducting extensive textual and photographic research on the veteran experience. The circumstances of war and its consequences fascinate him: What does society expect from veterans after they have endured such tragic and grueling situations?

“The idea of that bottled violence returning” was the entry point, said Lohier. “I wanted to explore the emotional landscape of someone trying to navigate extraordinary trauma.”

Lohier started writing the book nine years ago, using time off from work to begin the manuscript. With support and encouragement from his family in Toronto, he engaged in a vigorous writing process: He would make lists and lists of words and their many synonyms—trying to determine the slight differences between each alternative—in order to achieve his goal of creating a consistent tone throughout the book. Additionally, he resolved to make the book exhilarating, making sure that each passage was one that would keep himself fascinated as a reader. Before Radiant Night, Lohier had published another thriller titled False Idols, which he co-wrote with two other writers.

The idea for Radiant Night initially came to Lohier from a biography about a man who, after surviving an ambulance crash that killed multiple passengers, began philanthropic work. It was a story about an attempt to cope with life-shattering trauma and guilt. Lohier paralleled certain circumstances of its plot in his own book by positioning the protagonist Ludwig as the only marine to have survived a catastrophic trauma.

Lohier also added the mysterious element of the stranger Mrs. S. to the narrative, who brings enchanting mysticism, fortune telling, and tarot to Ludwig’s life. Lohier immersed himself in the history of tarot, collecting multiple decks that were consequently strewn every which way in his house.

Lohier chose tarot because it was a “system of organizing the world,” he said. The tarot serves as a “hopeful path for someone who is stuck in the chaos of his own mind.”

And with this tarot-filled story of hope emerging from devastation, Lohier has found a radiancy from his protagonist’s terribly traumatic past.