Woodward to Students: Journalism Is “Heading Off a Cliff”

Watergate reporter Bob Woodward discussed the future of journalism and gave advice to student reporters during an informal conversation at the IOP on Tuesday. 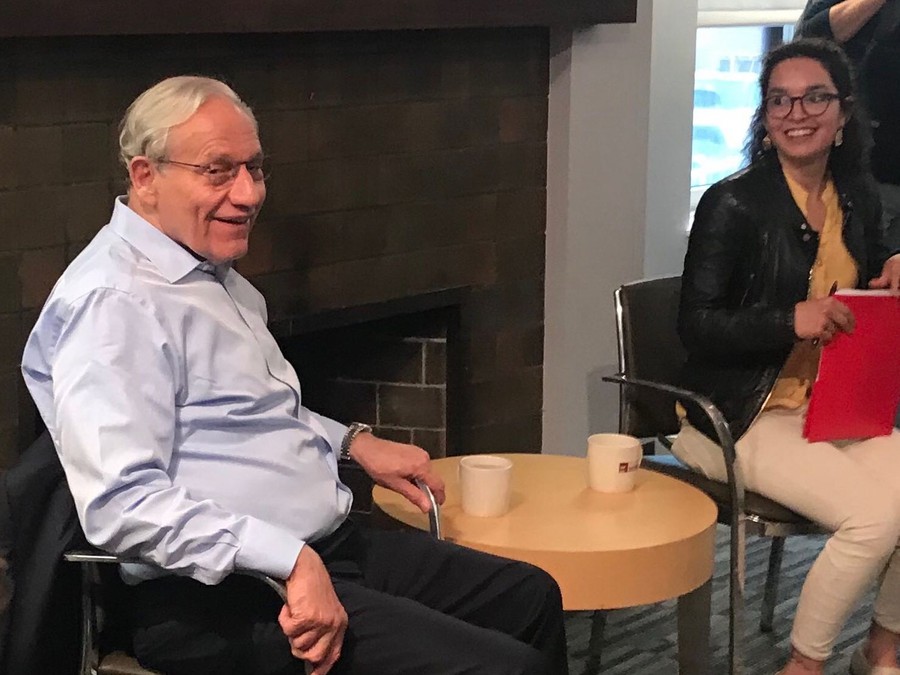 Watergate reporter Bob Woodward gave student journalists advice on getting to “the best obtainable version of the truth” during an informal conversation at the Institute of Politics (IOP) on Tuesday.

Laughter punctuated the students-only conversation, which touched on subjects ranging from Watergate to cable news to the 1989 cult film Dead Poets Society—and the future of journalism.

Woodward began the event by discussing his investigative technique and early journalistic career. Of investigative journalism, he said. “The key is to surround the problem and find everyone who might know something about it…. You never have enough [information]. You’re never done.”

Woodward came to journalism after serving in the Navy for five years, a time that he said he regrets. “I was disappointed in myself in the Navy that I didn’t have the courage to run away,” he said. “I didn’t like the Vietnam War, but I acquiesced to the system.”

But Woodward, who joined The Washington Post in 1971 and found himself covering the Watergate scandal just a year later, loved journalism—so much so that he would volunteer to write extra stories during the day after covering the police beat at night.

“I often say if somebody came from Mars and spent a year in the United States and came back, and they asked who are the people in America who have the best jobs, they’d say the journalists,” Woodward said. “We get to make momentary entry into people’s lives when they’re interesting—and get the hell out when they cease to be interesting!”

About halfway through the event, IOP director David Axelrod stopped in. Axelrod asked Woodward, whom he called “a living legend,” about the future of journalism in the digital age.

“Reporters today have no luxury of time,” Axelrod said, “and it seems to me that that is really burdensome, to have to do the assiduous work required to report accurately but do it in a timeframe that’s compressed.”

Woodward said that public trust in journalism is declining, which he blamed partially on cable news channels. Woodward noted that many reporters—including Axelrod—go on cable news shows and share their opinions and that they are rarely held accountable for what they say.

“Unfortunately, everything that goes on on these cable news shows goes up in the ether. It’s gone. You can say anything,” Woodward said, adding that there’s a significant financial incentive for reporters to do cable news. He asked Axelrod, who has a contract with CNN, how much he’s paid for that contract—a question that received laughter from the crowd, but no answer from Axelrod.

Axelrod agreed with Woodward that reporters speaking on opinion shows erodes public trust in journalism. “They’re being asked to opine on those cable shows in a way that reporters probably shouldn’t be opining,” he said. “It lends credence to this meme that journalists are partisans.”

Woodward said that to tackle public distrust, reporters need to cultivate humility. He referenced a letter that Washington Post publisher Katharine Graham sent him and Carl Bernstein after Nixon’s resignation, in which Graham told the pair to “beware the demon pomposity.”

“The demon pomposity stalks the halls of the media, politics, academia, business, Silicon Valley, Wall Street,” Woodward said. “And this demon pomposity really is bad for the media. Because what is happening is, reporters are taking sides…. I think that is a catastrophe for the political system.”

Asked what is needed to make journalism objective again, Woodward referenced a scene from the film Dead Poets Society in which actor Robin Williams stands on his desk and asserts the importance of thinking about new ways to do things.

Like Williams in the film, Woodward said that journalists “have got to rethink everything. It’s a big job. I don’t know who’s doing it. But if we don’t rethink it, we’re just heading off a cliff.”

Woodward said he is “very worried” about the future of journalism given the climate of partisanship and increasing public distrust, but that in the end, he is convinced that “there are facts.”

He offered several pieces of advice to student journalists interested in getting at those facts. He told students to “go to the scene,” to “always show up,” and to ask sources for help.

“The four most potent words in journalism or any human contact [are]: ‘I need your help,’” Woodward said.

Ultimately, Woodward told students, it’s impossible to get a story perfectly right. “Perfect? You never get that,” he said. “You get what we call the best obtainable version of the truth.”