Get Out The Vote Efforts Adapt To An Unprecedented Election 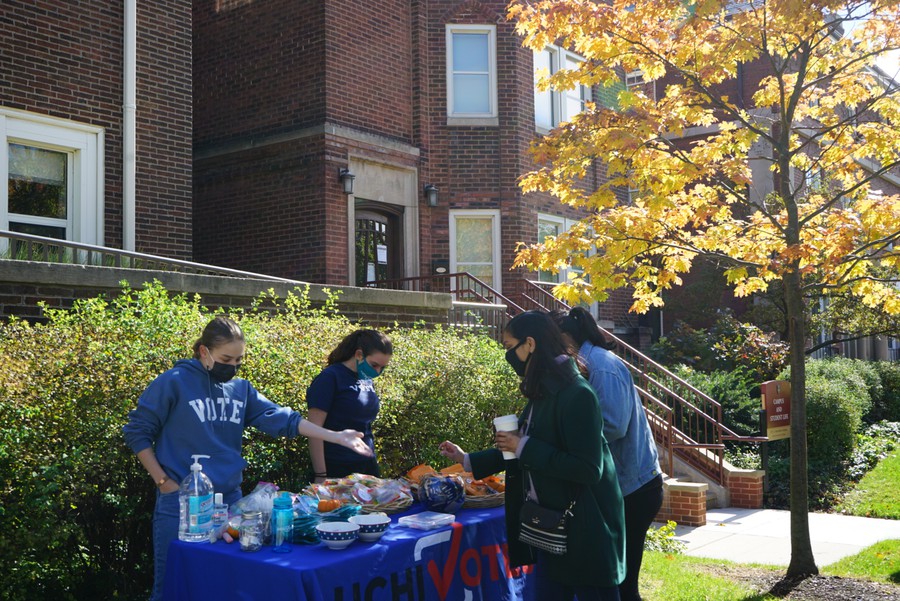 UChiVotes members tabled outside the Institute of Politics (IOP) and answered student questions.

By Niharika Iyer   and Anjali Pullabhotla

First-year Grace Lehto was jittery with excitement as she walked her absentee ballot to the drop-off box nearly two weeks before Election Day. Currently attending classes remotely, Lehto is registered in her home state of New Hampshire.

“New Hampshire may be small, but we have big energy,” she joked. “I chose to register in New Hampshire because every vote matters here, as we do tend to be a swing state.”

Lehto is not alone in her enthusiasm to vote; in the days leading up to the general election, “Get Out the Vote” campaigns have reached full speed.

“If you’re eligible and able, you should vote,” Lehto, a voter registrar in the New Hampshire primary, declared with finality and without hesitation. “If you feel as though your vote is not impactful enough, you should involve yourself in local politics. If you don’t see yourself represented, be the change you want to see.”

Not everyone, however, agrees that voting is imperative. First-year Chelsea Egbarin is registered in Florida, and though she is voting in this election, she understands that people may be disillusioned with the current state of electoral politics.

“For a lot of people, there are no differences between the presidential candidates,” Egbarin said. “To folks in vulnerable communities—queer, Black, or indigenous people of color—their lives are still endangered. The rhetoric that everyone should be voting, or everyone should be a poll worker—well, not everyone has a voice there.”

Who has a voice?

As voting access restrictions disproportionately impact minority communities, voting rights organizations across Illinois are working to mitigate barriers to the voting booth among these populations.

Incarcerated citizens are one such demographic. A report from the Prison Policy Initiative (PPI) finds that “most people in jail are legally eligible to vote, but in practice, they can’t.” This “de-facto disenfranchisement,” according to the PPI, is the result of “widespread misinformation about eligibility, myriad barriers to voter registration, and challenges to casting a ballot.”

Chicago Votes is the official sponsor of election activities in Cook County Jail (CCJ), one of the largest single-site county pre-detention facilities in the nation. Initially, their role was limited to a registration drive once a month. Over time, however, the organization has undertaken in-person election coordination and civic education among inmates and committed to a state-wide legislative advocacy platform through its “Unlock Civics” campaign.

In response to the growing concern about incarcerated citizens’ low voter participation, the Illinois legislature enacted SB -2090, a law that establishes a process under which detainees are provided accessible information to their voting rights, in August 2019.

In March, CCJ saw a 40 percent voter turnout rate, the first election in which SB-2090 was in place. Jail voter participation remained low, however, in other counties across Illinois.

ACLU of Illinois Advocacy Associate Michelle Hernandez attributes this low turnout to the lack of advocacy outreach, as jails were closed to the public due to COVID-19. Hernandez hopes, however, that voter turnout will increase in the general election.

As the COVID-19 pandemic has proved restrictive to Get Out the Vote advocates across Illinois, organizations have turned to virtual programming as a way to reach voters.

On -campus, the student-run nonpartisan voter engagement organization, UChiVotes continues to encourage students to register to vote and participate in the general election. While in past years, representatives of the organization crowded Cobb Hall and the Reynolds Club to register voters, the operation has become virtual this year. The organization, an affiliate of the Institute of Politics, has hosted a digital “Why We Vote” campaign in league with faculty, the Organization of Black Students, and its trained voter ambassadors. It has also organized voter registration efforts through a moving art installation by artist Jenny Holzer.

“It has been a very big adjustment considering so much of our work involves being in and a part of the community. We have fully transitioned our leadership development work and our Get Out the Vote Phone Banks to Zoom, and have been able to also find fun and creative ways to bring our Give A Shit Happy Hours (usually in a bar) to YouTube Live,” Boutros wrote.

Hernandez told The Maroon that the transition to digital advocacy has posed a challenge for the ACLU of Illinois’s efforts.

“Not everyone has access to the Internet. We’ve kept in mind, then, that there are certain populations that we cannot reach solely through virtual outreach and have tried to partner with organizations that have more contact with these communities, instead,” Hernandez said.

As advocacy has moved online due to the threat of viral transmission from repeated in-person contact, advocates have supported the expansion of vote-by-mail and early voting access to mitigate the health risks of large-scale, in-person voting.

Held in March, the Illinois primary occurred just days after the coronavirus was officially declared a pandemic. Consequently, the Chicago Board of Elections, predicting fear among voters, suggested to the governor that in-person voting in the city be cancelled completely and a vote-by-mail option be pursued instead. The governor rejected the option.

Senate Bill 1863, in place for the duration of this election season, hopes to address the concerns raised in the primary and increase turnout in the general election.

First, the bill increases access to vote-by-mail and early voting options. Vote-by-mail applications were delivered to all voters who have voted in an election since 2018. The barriers posed by the signature-matching process have also decreased. Election authorities have been directed to view signatures as matching upon first glance rather than not. Furthermore, the law supports a public education campaign that works to ensure every Illinois resident is aware of how to guarantee their vote is counted.

Since the passage of the bill, 2,350,707 vote-by-mail requests have been processed with a 59 percent return rate, and 1,360,943 voters have voted early, with a total of 2,784,937 having already voted. Additionally, Illinois has seen record voter registration this year, with approximately  eight million registered voters. In comparison, 5,536,424 votes were cast in the 2016 general election.

Second, the bill declares Election Day a federal holiday. As a result of the declaration, schools, which are closed on November 3, can serve as polling stations, replacing nursing homes, where residents are at high risk of death due to COVID-19.

The bill also expands youth participation in the electoral process. 16-year-olds and 17-year- olds are able to serve as election judges this season, a role that is usually undertaken by older individuals, to whom COVID-19 poses a larger threat.

Chicago Votes has traditionally held a “Parade to the Polls” that transports thousands of college and high school students to voting locations. With the passage of the bill, its focus this year has been partnering with the Chicago Board of Elections to recruit 3,000 young election judges from local high schools and colleges.

“I think that young people have seen enough of elected officials and a system that doesn’'t work for them, and [they] are fed up. Chicago Votes has been working very hard to reach young people and ensure that we can dismantle any barriers that young folx might be facing/ anxiety they may have. There has been a lot of effort to engage young people, and young folx have already been showing up in big numbers to the polls,” Boutros wrote.

Across Illinois, other advocacy groups have worked to mitigate the spread of misinformation. The League of Women Voters of Chicago (LWV Chicago) has been committed to spreading election information in a nonpartisan manner and advocating both for and against particular pieces of legislation. LWV Chicago has hosted regular seminars to inform constituents, including one by the Harris School of Public Policy’s Cyber Policy Initiative Executive Director Jake Braun on the relationship between cybersecurity and the election.

Concerns of voter and election fraud in this election have been rampant on the national stage, though there has been no evidence of any tampering in the Chicago area. In 2017, the Brennan Center for Justice rankeds the risk of ballot fraud at 0.00004 percent to 0.0009 percent based on studies of past elections.

Rebecca Carter is a legal fellow on voting rights with the Chicago Lawyers’ Committee for Civil Rights Under Law (CLCCRUL), a group of pro-bono lawyers who are working to actively combat election fraud and voter suppression, particularly among Chicago’s underserved residents. Carter said that some unexpected positive effects of the virtual setting have been “being able to speak with more people, doing more interviews, doing more panels, [and] presenting for more groups.”

“There have already been a significant number of calls with some issues that we are beginning to see voters have, [and we are] helping voters work through those issues,” Carter said. “Our ‘get out the vote’ is more so an effort than helps on Election Day and leading up to it through our election protection hotline.”

Chicago is using secure ballot drop-off boxes placed in easily available locations across Cook County and staffed by County Clerk employees to ensure the safety and security of the expected influx of mailed ballots. Over 50 early voting sites in and around the Chicago area were established, and grace period voting, which allows voters to register through early voting up to Election Day and which was passed by the Illinois legislature after the 2016 general election, are expected to contribute to voter turnout.

The CLCCRUL has focused on providing support for underserved communities, including those being held pre-trial in the Cook County Jail.

“If there are concerns that a community member has, then it’'s important to take that seriously but also to empower them with information. That’s why we keep reiterating that there are secure drop boxes where people can drop votes off, that voter fraud is virtually nonexistent… We want people to know that there are safe ways to go vote in person as well as by mail,” Carter said.

“It [is] important to advocate for a variety of approaches for all persons to be able to vote safely, especially in the midst of a pandemic.”