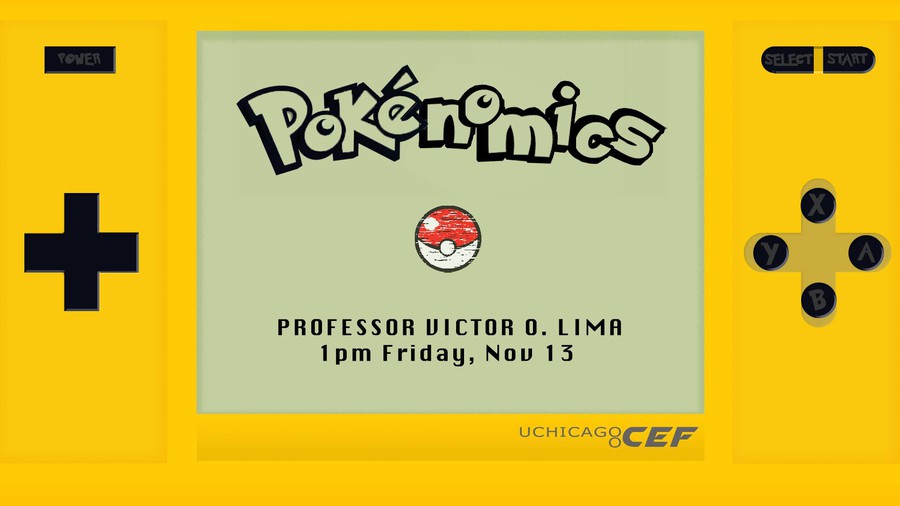 Released in 2016, Pokémon Go was arguably the closest we ever got to world peace: people ran across towns at midnight to catch a Dratini or crowded around city hubs at the sight of a Mareep. It encouraged us to exercise, meet people, and go outside.

Four years later, with people quarantined due to the COVID-19 pandemic, the Chicago Economics Forum held a virtual panel with Professor Victor Lima to discuss the economic implications behind the popular mobile game.

UChicago Economics student Jeremy Huang (AB ’23) started the discussion by asking how gamers connect with different Pokémon and choose their favorites. Lima reflected on his own experience with Pokémon (or, as he endearingly calls them, “’Mons”), having never played any Pokémon game before Pokémon Go. After a friend encouraged him to play Pokémon Go, Lima grew fond of its social aspects, as well as the incentive to catch something missing from his collection.

With an open mindset, Lima remarked on the unique qualities of each Pokémon. “You demand characteristics,” he stated. “Some are good for fighting. Some are pretty. When you start getting really into the battle side of things, some have strong defense. Some have devastating attacks. You can’t actually go and build your own ’Mon… You have to do combinations of characteristics… that span some space of desired qualities. You value them as you need them.”

Lima mentioned the appeal of keeping certain Pokémon and refraining from capturing an identical one in the wild: loss aversion. “Because you owned [a specific Pokémon] for a very long time… you have a difficult time parting with it,” he explained. “Economics is about having the willingness to pay. [Having or not having] the ’Mon gives you a higher—or lower—willingness to pay.”

Beyond attachment to a Pokémon, every trainer must bear in mind their battle strategy: without the ideal team, a trainer inevitably crawls toward defeat. Lima noted that a beginner should face randomized wins, but, as the player levels up, skills (and internet connection) determine the battle outcome. However, as the player reaches higher levels, Lima noticed a switch to game theory as the main predictor for victory. With limited information on a rational opponent’s party, a gamer must predict the best times to switch out Pokémon, use items, or even keep a near-fainted Pokémon in play.

“But there’s another model called Level-K Thinking,” Lima continued. “You play a Venusaur, and your opponent plays a Charizard. You play a Blastoise. Then [your opponent] plays Venusaur. [That second-guessing] gets close to a Nash equilibrium [and] might actually get you to Level 10 faster.”

Huang then asked about the assembly of the optimal Pokémon team: that is, the incentive to select Normal-type Pokémon in one’s party, ahead of more advantageous types like Grass or Psychic. Besides the fact that Normal Pokémon are resistant to Ghost Types, are jacks of all trades, can learn moves that counter Steel and Rock, and have the move Return (one of the highest power moves with no repercussions), Lima admitted that he takes on a strategy that mimics that of ancient Roman military tactics: modification of battle techniques already observed to win. “I got to my [Little Cup] team because a Pansear took me out, and I thought, ‘Oh, Pansear! Pretty good.’ So I put that one in and hoped it goes well.”

Lima and Huang then talked about the collector’s guilt behind purchases of vintage Pokémon cards; the risky opportunity cost of holding a gym when paying on the App Store would save time and effort; and irrational spending when Stardust is rare. Lima, who reportedly is in the 0.1% of Stardust owners, joked that he didn’t consider battling until around a month ago because of the consumption savings problem behind the Pokémon Go currency. Rather, he spent his time collecting Technical Machines (TMs), now proudly boasting a collection of 300 of each.

After a brief discussion on the benefit functions of spamming PokéBalls, Lima concluded the discussion with the topic of Niantic’s profit-maximization in Pokémon Go: it depends on the players’ attitude. “There’s variations across players’ elasticity. Niantic can raise the prices really high [without losing sales for inelastic players.] Then there’s elastic players: any little change, monetary or non-monetary, is going to make them leave… If they make catching the ’Mons a little too hard, [elastic players] will become disenchanted.”

“What Niantic does all the time is play around with [in-game events]. You can trade long-distance now,” Lima continued. “Another thing they understand really well is convexity and concavity. When going from bronze to silver [badges], then from silver to gold, getting gold is always harder than getting silver. You can see the convexity structure everywhere in the game. It gives players a sort of challenge. If the game were too easy, people would also get bored. Another interesting thing to see is how people are leveling up… We’ll see what barriers [Niantic] puts.”

What Pokémon type would Lima be? He hesitated, then answered, “Maybe Grass and Water.”