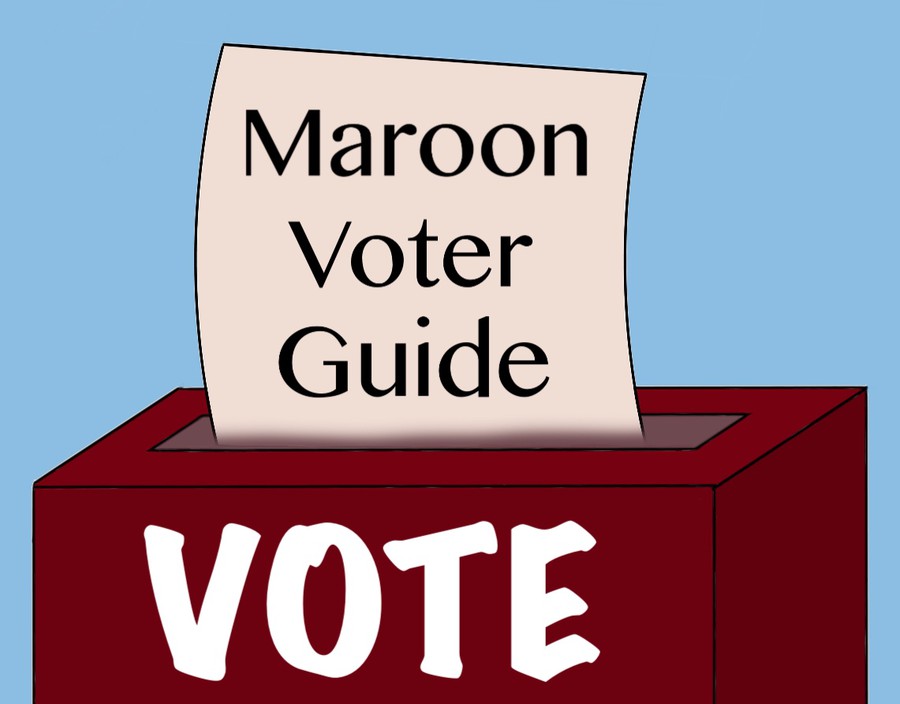 Leading up to the March 17 primary, The Maroon has put together a series of explainers and candidate guides to help Hyde Park voters make informed choices. The rest of the guides can be accessed here.

On March 17, Chicago residents will vote in the primary election to choose their top law enforcement official, the Cook County state’s attorney. The state’s attorney represents the government in criminal and civil prosecutions; in Cook County, the official oversees more than 700 attorneys in the second-largest prosecutorial office in the country. The general election will be held on November 3, 2020.

Incumbent State’s Attorney Kim Foxx has held the office since she was elected in 2016. Before taking this position she worked as an assistant state’s attorney and chief of staff for Cook County Board President Toni Preckwinkle.

Foxx was elected on a platform of reform similar to other progressive prosecutors nationwide. Since taking office, she has worked to reform cash bail and expunge thousands of marijuana convictions following statewide legalization. According to a report from the Marshall Project, Foxx’s office has charged fewer cases than her predecessor in every major category except for gun crime, for which prosecutions have increased.

During a town hall at the Institute of Politics at UChicago, Foxx pointed to the decline in prosecutions for felony shoplifting and driving on a suspended license as examples of how her office has reallocated resources from nonviolent to violent crime. She also emphasized the work the Conviction Integrity Unit has done during her tenure to exonerate people who were wrongfully convicted, often because of police misconduct.

Much of the media attention surrounding Foxx has focused on her handling of the highly publicized Jussie Smollett case. A Chicago Police Department investigation claimed Smollett had falsely reported a hate crime against him in January 2019. Foxx’s office later dropped the charges of disorderly conduct against him, and she was accused of being inappropriately influenced by contact with Smollett’s family. Irregularities in the Smollett case have been used by Foxx’s primary opponents Bill Conway and Donna More to critique Foxx’s time in office.

Foxx has picked up several high-profile endorsements, including U.S. Senators Bernie Sanders (A.B. ’64) and Kamala Harris, as well as from local politicians like Governor J. B. Pritzker, and Mayor Lori Lightfoot (J.D. ’89).

Democratic challenger Bill Conway (M.B.A. ’13) has had a nontraditional career path: After working as a prosecutor in the Cook County state’s attorney’s office from 2006 to 2012, he moved on to become an investment banker at J.P. Morgan, a Navy intelligence officer, and later a professor of business at DePaul University. As a prosecutor, Conway worked on financial crimes and public corruption. He has made fighting corruption in Cook County central to his campaign platform, promising to restore trust in the State Attorney’s office and increase prosecutions of white-collar corporate crime. Despite being a relative political unknown, Conway has managed to raise more money than Foxx, largely due to millions in contributions from his father, who cofounded the Carlyle Group, a private equity firm.

Democratic challenger Donna More has worked as a U.S. attorney, an assistant state’s attorney, and a general counsel to the Illinois Gaming Board, where she was involved in the process of legalizing and regulating gambling in Illinois. More came third in the 2016 race to then-incumbent Anita Alvarez and Foxx. She maintains a similar platform to her 2016 campaign, including promises to reduce gun violence and political corruption. In an interview with the Daily Herald, More criticized Foxx for declining to charge retail theft and drug trafficking cases, calling her policy “catch and release.” More has been endorsed by the Chicago Tribune.

Former Second Ward alderman Bob Fioretti is an experienced candidate, having run for mayor twice as well as for Cook County Board President. As an alderman, he focused on improving Chicago Public Schools and eliminating food deserts on the West Side. Fioretti lost his position in a 2011 redistricting that moved his entire ward: Months of negotiations within City Council following publication of the 2010 census data culminated in the entire Second Ward being moved north and Fioretti’s home ending up in the 28th Ward. Fioretti supports raising the maximum sentence for using illegal guns in violent crime, reopening mental health clinics, and creating Chicago’s own crime lab to resolve unsolved cases. He also promises to crack down on corruption in property tax deals, and to look at rolling back what he called “dangerous flaws” in Foxx’s bail reforms. The Fraternal Order of Police has endorsed Fioretti in the primary race.

Republican challenger Pat O’Brien, like many of the candidates in the field, worked as an assistant state’s attorney in the Felony Review Unit before being elected as a judge to the Cook County Circuit Court in 2006 and serving for eight years. O’Brien has represented private clients as well, including the Chicago Police Board. His platform focuses on gang-related violence, and proposes establishing a new unit, dubbed the “Rackets Unit,” to investigate all gang-related crimes and use grand juries to prosecute them. O’Brien has also called for increased monitoring of defendants awaiting trial. He has been endorsed by the Chicago Sun-Times in the Republican primary.

Republican candidate Christopher Pfannkuche won his party’s nomination in the 2016 state’s attorney’s race but lost to Foxx in the general election with 28 percent of the vote to Foxx’s 72 percent. He is a self-described “career criminal prosecutor,” and has worked for the state’s attorney’s office in both Cook and Macon Counties, in addition to advising the Metropolitan Crime Commission and training police officers. His experience in government is one of the key talking points of his campaign. Pfannkuche’s platform advocates using the state’s attorney’s office to address the opioid epidemic, particularly illegal sales of heroin and fentanyl. Pfannkuche has also proposed a community outreach program that would send prosecutors into neighborhoods to meet with residents as well as various youth ambassadorship and internship programs within the criminal justice system. Pfannkuche has been endorsed by the Fraternal Order of Police in the Republican primary election.