Nelson and Greenhouse both said they are hopeful for labor's future given the new energy in the labor movement. 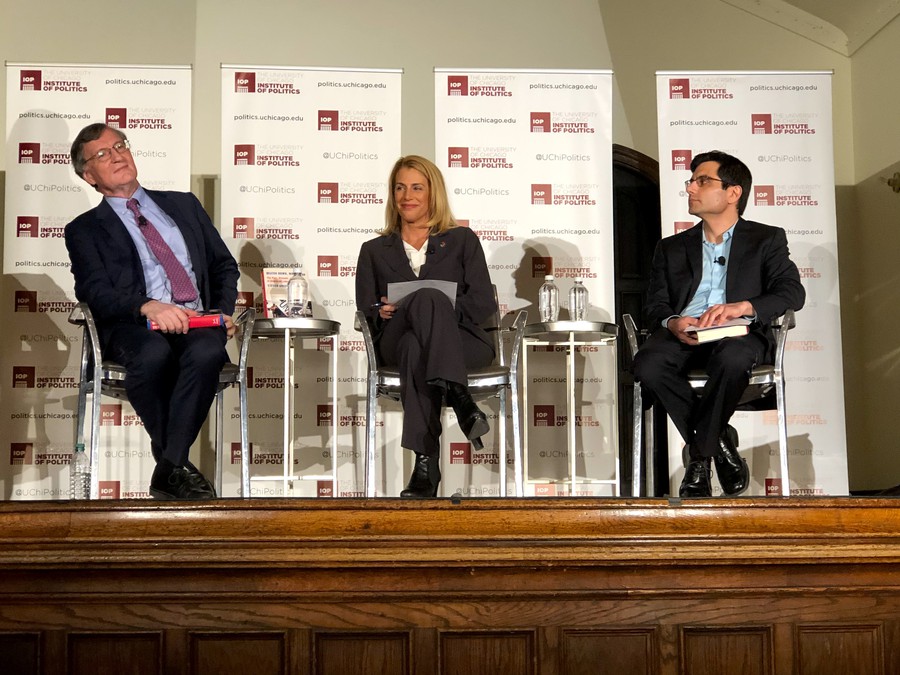 On Monday, Sara Nelson, who leads a union representing flight attendants, and Steven Greenhouse, a former New York Times labor reporter, discussed the state of the American labor movement. Noam Scheiber of The New York Times moderated the discussion, whose topics ranged from new union vitality to the role of the labor movement in the 2020 elections.

“In our field, in media, the two most anti-union newspapers in the country have unionized recently: the Chicago Tribune and the L.A. Times.”

“We’ve seen a lot of graduate students unionizing, here and elsewhere,” Greenhouse added, referring to Graduate Students United, the union of graduate workers at UChicago. “As a reporter, I’m not supposed to sound opinionated, but I say, how could a university administration deny that the teaching done by graduate teaching assistants is work? I mean, that’s just absurd to me.”

Nelson, the president of the Association of Flight Attendants-CWA, also trained her sights on local labor struggles, namechecking the Student Library Employees Union—students who work in the University of Chicago’s library bookstacks and at check-out desks, managing library materials.

“The labor movement is for every working person,” Nelson said. “It is people of color, it is women, it is anyone who has a job…and I should just take a quick moment to say, it is also the student library workers right here at the University of Chicago who have been fighting for two-and-a-half years to get recognition for their union.”

Nelson also spoke about how employer maltreatment has affected the labor movement. “It’s a real microcosm for what I think is happening all across America, in that there is this feeling [in this next generation of workers] that no one did it for them. They’re going to have to do it for themselves. They’re more prone for collective action.”

Nelson highlighted the fact that recent American union activity has inspired other workers’ movements within the country. “People are ready to fight, and they’re looking for answers. The labor movement has it for them.”

Greenhouse agreed. Workers, he said, “are trying to take power into their own hands in the form of collective power.”

Referring to the Chicago Teachers Union’s strike last year, Nelson said that the degree of labor solidarity, and the fact that teachers struck alongside low-wage workers for student rights—not just pay raises—signaled a new moment in union organizing.

Union halls, according to Nelson, “bring people together who come from all different beliefs and different political systems.”

“The Chicago teachers, when they struck—they were not all far lefty Democrats supporting Bernie Sanders. There were plenty of Trump voters out there on the picket line because they had a common cause,” Nelson said.

She suggested that Democratic presidential candidates’ extensive labor plans are no accident, and that targeting worker’s unions is a way to bring more people to the polls. Workers are taking collective action together, and in some cases getting a result in a day or within a couple weeks. When was the last time you got anything done in the government in that amount of time?”

Greenhouse said that one of the main issues in the 2016 and 2020 elections has been the disparity between union leadership and workers. “I think a lot of the candidates realize that a big reason why Hillary Clinton lost was because she didn’t focus enough on fighting for workers” as opposed to Trump, Greenhouse said. He suggested that the hesitance to endorse candidates results from the crowded primaries: “If only 34 percent support Bernie, you’re not going to say, ‘Well, we should endorse him,’ because 66 percent don’t. Union leaders are being more careful now.”

Nelson defended union leaders, saying that dynamics have changed since 2016, when she believes that union leaders were more tightly bound to established political relationships. She argued that in 2020 elections unions are leaving endorsements to local chapter leaders.

“So, we want the labor union to be a big tent,” one audience member said during the question period. “Is there room in this tent for unions like police unions or prison guard unions, whose incentives are widely perceived to be imperfectly aligned with a lot of progressive groups?”

“We have a flight attendant who ended up in six weeks of ICE detention this past year,” Nelson responded. When she was eventually released, Nelson said, the flight attendant spoke powerfully about her interactions with the non-unionized guards who detained her.

“The place was a mess, it wasn’t clean, the food was terrible, they were given terrible treatment,” Nelson said the flight attendant recalled. “She remembers talking with a guard who talked about this experience—about being hired, and then not being given the resources to do the job herself, and getting frustrated, and frustrated with the people she’s guarding, who are saying the conditions are horrible. It’s setting up this conflict between the worker who has been hired, and the person that they are policing.”

“So I think that it’s really important that we recognize that the people who are creating this conflict, and pushing people together into this conflict, are the ones to blame,” Nelson concluded. “We have to be really careful about saying some workers deserve a union, and others don’t.”

Greenhouse and Nelson ultimately agreed that the labor movement is being revitalized, and that the solidarity between all unions is important to its regrowth.

“First and foremost, it can’t be about thinking that [the 2020] election will change anything,” said Nelson. “We should fight forward for our emotions for each other. Because our emotions are not a detriment to us; they are our superpower, because it means that we’re going to fight like hell for the people that we love.”