The administration trots out Greek organizations when it proves lucrative to do so, then cries “non-recognition!” to avoid association with Greek life's less savory aspects. 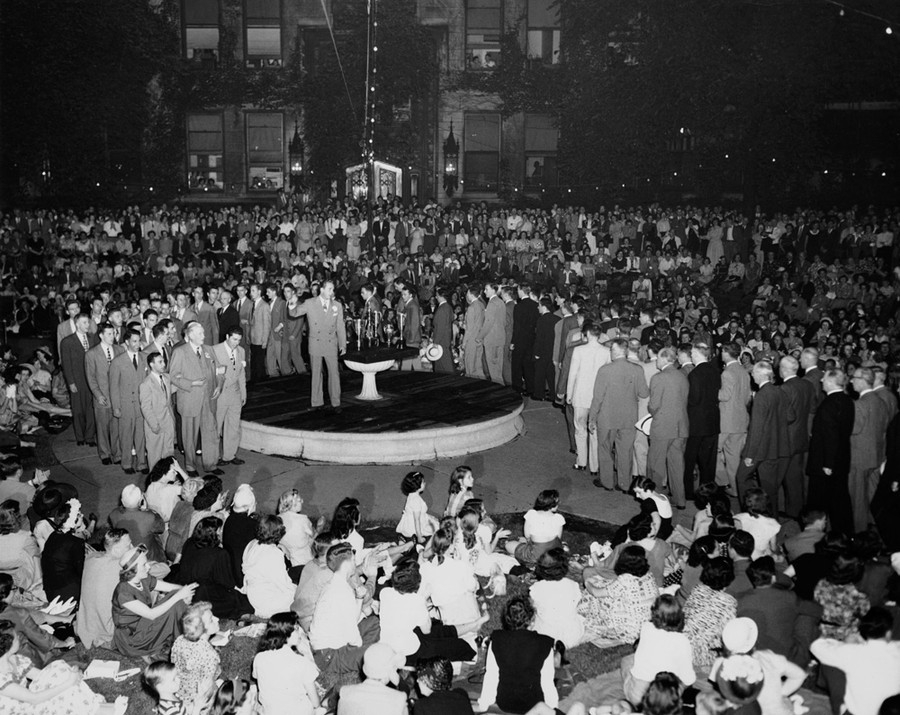 Fraternities and women's social club members gather on campus for the 1949 IF Sing.

But for a university with an explicit stance of non-recognition, fraternities and sororities certainly play a conspicuous role in official, and heavily promoted, UChicago programming.

One example occurs every Alumni Weekend, at the University-hosted Intrafraternity (IF) Sing. Every June, past and present Greek members file into Hutchinson Courtyard, clad in carefully coordinated semi-formal attire, to compete against each other with renditions of their chapters’ songs. IF Sing culminates in the presentation of five championship cups: for the organization with the highest quality of singing, for the “most spirited, yet respectful, performance,” and so on.

The affair has been a mainstay since 1911, according to the section of UChicago’s official Alumni Weekend website dedicated to IF Sing. The site boasts: “Few colleges and universities have events of comparable age.” After a review of IF Sing history—during the 1920s, we learn, more than 18,000 alumni and current students competed—the page concludes with a reflection on the state of Greek life today.

“IF Sing has endured at Chicago, notwithstanding intervening wars, societal shifts, and institutional changes in the University that have affected fraternity representation on campus,” it reads. “Campus Greek life continues to expand in the new century.”

Just how big this expansion has been, however, is an open question. Because the University does not recognize fraternities and sororities, it does not track membership. In response to a request for comment for this editorial, a spokesperson said that UChicago “does not keep official records.”

But in 2016, an administrator from the Alumni Association confirmed to The Maroon that the alumni office does keep tabs on former students’ Greek pasts.

For his part, Dean of the College John Boyer has denied any suggestion that alumni donations play into the University’s Greek life policy.

But Boyer rejected an explicit link: “Anyone with any special interest money can take a hike.”

Meanwhile, Admissions employees are told to mention UChicago’s thriving Greek scene to prospective students, as part of a pitch about the College’s bubbly social climate. Student tour guides are instructed to tell visitors that roughly 15–20 percent of undergrads here are Greek-affiliated.

And even as the College website contains no Greek-related information (something that appears on nearly all peer institutions’ websites—whether or not they recognize fraternities), the official blog run by Admissions does discuss Greek life. One 2018 essay on Admissions’ Uncommon Blog, for instance, lauds sorority philanthropy.

Alumni and Admissions thus expose a broader bifurcation in the University’s approach to Greek organizations. Does the University, in fact, have a real “non-recognition” policy?

Clearly, administrators trot out the presence of Greek life when it is useful in luring alumni—and alumni dollars—back to campus. And at the Admissions office, the school’s Greek presence has helped put to rest the notion that UChicago is “where fun goes to die.”

A recent example? Last quarter, after a sexual assault was reported at Delta Upsilon’s fraternity house, administrators emailed a community alert to undergraduate and graduate students that said the incident had occurred at “an off-campus party at 5714 South Woodlawn Avenue.” The alert did not link this address to Delta Upsilon (DU), or to any fraternity.

As many students took to Facebook groups and other online forums to point out, this use of “off-campus” is, at best, misleading. DU’s house is sandwiched between the Center for Identity and Inclusion and the Pozen Center for Human Rights—two University buildings. The Quadrangle Club, a popular hangout for professors, sits in DU’s back yard, and David Axelrod surely enjoys a clear view into the fraternity’s upper floors from his office at the Institute of Politics, across the street.

Administrators’ selective distancing of Greek life—their acknowledgment of it only when it makes the University money—isn’t just self-serving: It affects student safety. Students should not have to conduct independent research in order to learn that a sexual assault was reported under the oversight of an expressly University-affiliated organization—since, after all, fraternities brand themselves with UChicago’s name.

As it stands, it also falls solely to the Panhellenic Council, composed of student sorority members, to address alleged abuses by canceling social events, as the council did in the wake of reported date-rape drugs at Sigma Chi parties. Here, a lack of University intervention means a group of students in sororities must take on the task of governance and communication after events like drugging or sexual assault—clearly, not ideal.

The University’s failure to name fraternities in conversations about sexual assault and safety also inevitably fuels gossip and misinformation, as many students scramble to fill what they see as an information void.

In defending the administration’s approach, Boyer has said that “as long as people don’t violate the criminal laws of the state of Illinois, I don’t care what they do.” But of course, allegations about illegal activity—sexual assault and the use of date-rape drugs—have surfaced repeatedly in fraternities’ recent history on campus.

UChicago’s inconsistent stance on recognition has seemed to wear thin at some points in recent years. In spring 2016, for instance, the Center for Leadership and Involvement unveiled the Student Engagement Fund, which prevents non-RSOs from using campus spaces for free. Instead, in order to reserve rooms for chapter and philanthropy events, Greek organizations have since had to apply for funding each quarter. When the fund was launched, some saw it as constraining regularly occurring functions of Greek life, especially for sororities.

More outstandingly, in summer 2018, administrators wrote directly to top fraternity leaders, asking them not to hold O-Week parties with first-year students. The administration cited “several highly concerning incidents last year” as the reason for the request.

Not only was this direct, semi-private outreach an unusual move for a university that doesn’t otherwise track Greek membership, it was also an ineffectual one: At least one fraternity party held during O-Week that year did, in fact, allow first-years.

What this illustrates is that half-hearted attempts to negotiate the relationship between the administration and Greek organizations are not the solution. These decisions wind up being either toothless, as with the 2018 fraternity letter, or meaninglessly bureaucratic: UChicago should, after all, have no urgent reason to clamp down on evening on-campus chapter meetings.

The administration must, therefore, iron out its stance. UChicago’s current, wavering position is both hypocritical and unsustainable.

We are not picking a side in a debate about whether Greek life belongs here. Instead, we urge the administration to adopt a self-consistent stance: They are the ones who need to choose a side.

How might administrators’ current fence-sitting resolve? The school could recognize Greek life, allowing it to exist on campus under appropriate oversight. Alternatively, it could continue its policy of non-recognition but apply it consistently and intentionally, instead of waiving it when alumni (and their wallets) come to town.

What we’re asking is not unusual: A clear, consistent stance on Greek life is the norm at peer institutions with Greek life on campus. Columbia, Stanford, and UPenn have clear recognition policies and similar proportions of Greek-affiliated students as UChicago. On the flip side of the issue, Harvard imposes harsh sanctions on Greek involvement, while Princeton has a clearly delineated policy of non-recognition, with accompanying restrictions on fraternity access to school resources and events.

It’s worth re-emphasizing: Recognition can work in many ways. Administrators’ acknowledgment of, and accountability for, Greek activities does not equate to discouraging or restricting these organizations’ existence. In fact, many schools use recognition as a conduit for more active support of fraternities and sororities.

UChicago’s Greek life dilemma is thus easily resolved. There are two choices here: support for Greek life, with the school’s requisite oversight and accountability, or intentional and consistent non-recognition. The administration simply needs to pick one.