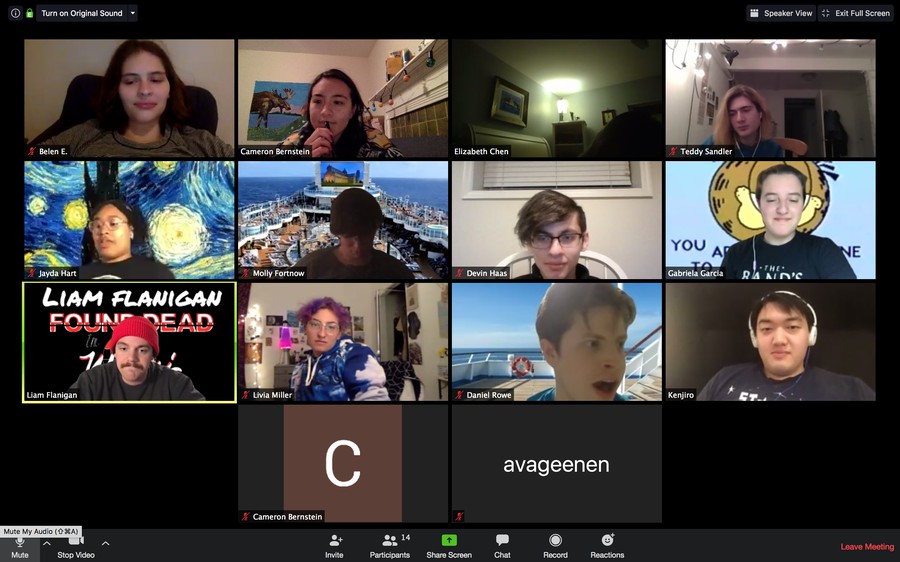 Writers convene for a Zoom meeting during Radio[24].

A terrified first-year, I wrote for Theater[24] during fall quarter and had the worst (and so far, only) all-nighter of my life. Nervous about disrupting my sleep schedule that badly again, I opted not to write winter quarter and was planning similarly for spring.

But when we were all sent home and into the illusory abyss of unstructured time, I began to yearn for the sense of purpose that countless hours of academic toil had once instilled in me. So when my friend texted me two weeks ago, I reluctantly agreed to write with him for Radio[24], the socially-distanced adaptation of Theater[24].

Writing for Theater[24] is a grueling affair: You’re brought to a secret location by a festival curator, left there from 8 p.m. to 8 a.m. the next day, and expected to have produced one act in that time period. Given that it’s a Friday night, you’re sleep deprived, and you’re already running on fumes, the night becomes a caffeine-fueled fever dream in which you’re not quite sure what time it is or whether you’re actually awake. By the time the clock strikes 8 a.m., you’re ready to sleep for a month, but instead you head over to the brief production meeting and read through that follow.

Knowing this, I was more than a little nervous about Radio[24]. Would I be forced to stay awake for 24 hours in my childhood bedroom? Would I have to be on a Zoom call for 12 consecutive hours? Would I have the same or similar opportunities for collaboration that come from being in a room full of sleep-deprived writers?

I didn’t trust my post-all-nighter brain to remember everything, so I kept a timeline of what I was doing throughout the night of Radio[24]:

6:30 p.m.: I join the Zoom company meeting to meet everyone involved with this cycle of the festival.

7 p.m.: We receive our themes. This time, the curators have selected seven Bath & Body Works fragrances for the writers to take inspiration from. My friend Liam and I are given “Juniper Coriander” while other writing teams get scents like “Mahogany Teakwood High Intensity,” and “Endless Weekend.” After the meeting ends, Liam and I begin to throw ideas at each other. He pitches buddy cops, I pitch old people. He pitches strippers, I pitch vegans. We decide to write about old undercover cops at a gerontophilic vegan strip club.

9 p.m.: First writer meeting takes place (these occur every two hours throughout the night). Everyone outlines their plays—we hear about vampires, Starbucks, Econ Bros™, wishes gone wrong, and more. Our strip club idea gets some laughs.

11 p.m.: Second writer meeting takes place. Liam and I have a couple pages of our script written. Cameron, one of the curators, organizes us into breakout rooms so we can discuss our progress. I talk with fellow writers Kenjiro and Livia, while Cameron guides our conversation.

11:20 p.m.: My breakout session goes longer than Liam’s, so I come back to a couple new pages of script. I review what Liam’s added, and we keep writing.

1 a.m.: Third writer meeting. Not everyone’s here, since these plays are shorter than traditional Theater[24] plays, and people are finishing faster. We move into breakout rooms, and this time I talk with Liam, Belen, and Molly. Despite my caffeine dosage, I’m too tired to remember much, but I recall talking about vacation cults and Econ Bros™ at some point. Our horrible innuendos get some laughs as well. Liam and I decide over Messenger that our draft is complete!

1:20 a.m.: Liam is visibly exhausted (it’s 2:20 a.m. his time), and we’ve finished reviewing our script to ensure our old people sound old enough. We remove our goofy Zoom backgrounds, thank each other for working together well, and head to bed. Our next meeting is at 8:15 a.m.—we’re not looking forward to waking up for it.

2:13 a.m.: I head to bed, reading some Jean Anouilh to cool off my over-caffeinated brain.

8:13 a.m.: I join the full-company Zoom meeting. I’m one of the first people there, but I’m definitely not the only drowsy writer. Cameron leads us through logistics as people trickle in.

8:40 a.m.: Everyone’s here, and we’ve decided to do a quick read through so Liam and I can go back to sleep.

Throughout the night, we timed the play, tried out our old people voices, complained about radio formatting on Google Docs, and just had a good time. We were laughing so hard we couldn’t speak most of the time—indicative of either a solid play or two very, very tired writers.

Radio[24] was glorious: All of the plays turned out remarkably well, considering the 24-hour time period in which they were created. I hope this festival continues as an addendum to or separate form of Theater[24], as it creates opportunities for more people than just writers, directors, and actors. Additionally, writing for radio was fun. As much as Liam and I griped about the formatting, learning to write for radio was a great learning and creative experience.

If you missed the festival, you can hear my play (Very Legal: The City’s Finest Spice Racks) and all of the others on the Theater[24] YouTube channel.