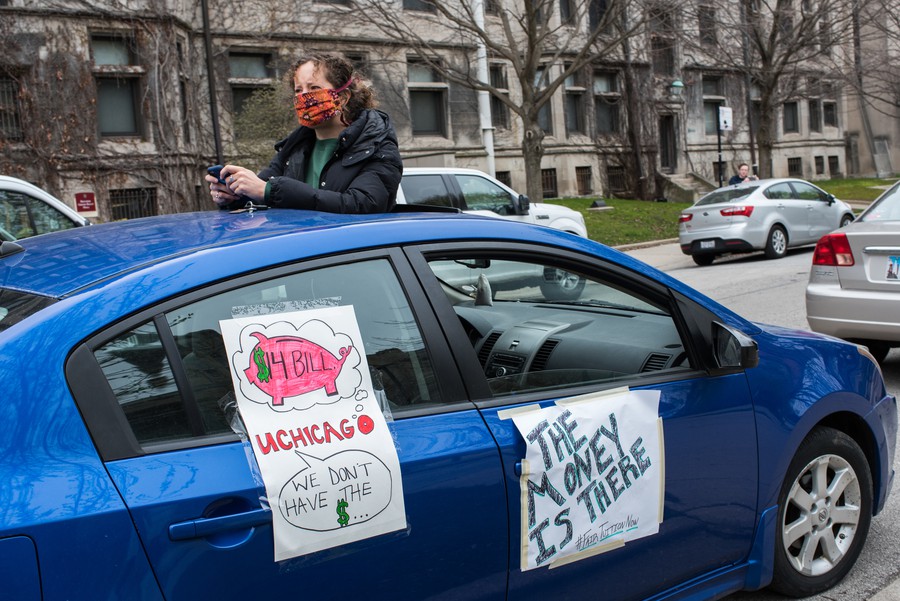 Organizers with student group UChicago for Fair Tuition (UCFT) demonstrated in front of University President Robert Zimmer’s house on Friday afternoon in order to escalate their campaign demanding that tuition be halved for the duration of the COVID-19 pandemic. The demonstrators observed social distancing guidelines, lining the street six feet apart and holding signs or honking to show support from inside cars parked along University Avenue.

Representatives from #CareNotCops, Graduate Students United (GSU), and UChicago Against Displacement (UCAD) all gave speeches in support of UCFT’s demands.

“There’s a lot of alignment between #CareNotCops and the campaign for fair tuition,” said fourth-year organizer Michelle Yang. “UChicago is a super-wealthy institution. It made and maintained its wealth through exploitation and extraction.”

“Some may think that tuition is not a grad worker’s issue. That’s a mistake,” Mankin said. “This is an unnecessary financial burden in good times. In this moment it’s absurd.”

Mankin noted that GSU endorsed UCFT on Wednesday, and that UCFT has supported GSU’s  recent petition calling for extended time-to-degree and health insurance, as well as financial relief for struggling students.

UChicago Against Displacement (UCAD) organizer Emily Verburg, a graduate student in the School of Social Service Administration, emphasized the connections between UCAD’s demands for affordable housing in Woodlawn and UCFT’s tuition reduction campaign.

“UChicago is the same powerful institution which is hoarding wealth in this time of crisis, which also recently purchased the Woodlawn Jewel-Osco for 20 million dollars. This is the same powerful institution that has been buying up vacant land in Washington Park and holding onto it for years,” Verburg said. “Our struggle for fair tuition is just a different side of the struggle of longtime black residents who are fighting against displacement from their homes and neighborhoods.”

Second-year Nika Lofton, an organizer with UChicago Student Action (UCSA), read a series of testimonials from students describing why they support UCFT’s demand that UChicago reduce tuition. Most of the testimonials came from international and graduate students who do not have access to the same sources of financial aid as domestic undergraduates and are not covered by the University’s commitment to meeting a student’s “demonstrated financial need.”

A testimonial written by second-year student Shahrez Aziz described how the currency in his home country of Pakistan had been devalued in the two years since he applied without asking for financial aid, which bars him from applying for aid in the future.

“At this point in time, it’s been a 59 percent increase since when I applied, and I had written to the school once before the pandemic as well for assistance, to which they said international students are only given assistance if they apply for aid when they apply,” Aziz wrote. “However, now my parents are also getting pay cuts and are finding it extremely hard to pay for my education. They’ve already taken multiple loans.”

Closing the demonstration, second year UCFT organizer Livia Miller left a copy of UCFT’s demands in front of the steps leading to Zimmer’s door, while a caravan of cars taped with slogans like “Fair Tuition Now” circled the block honking.

“These are the voices of our community, asking for things to change, asking to be taken care of, asking to be supported in this incredibly trying time,” Miller said.