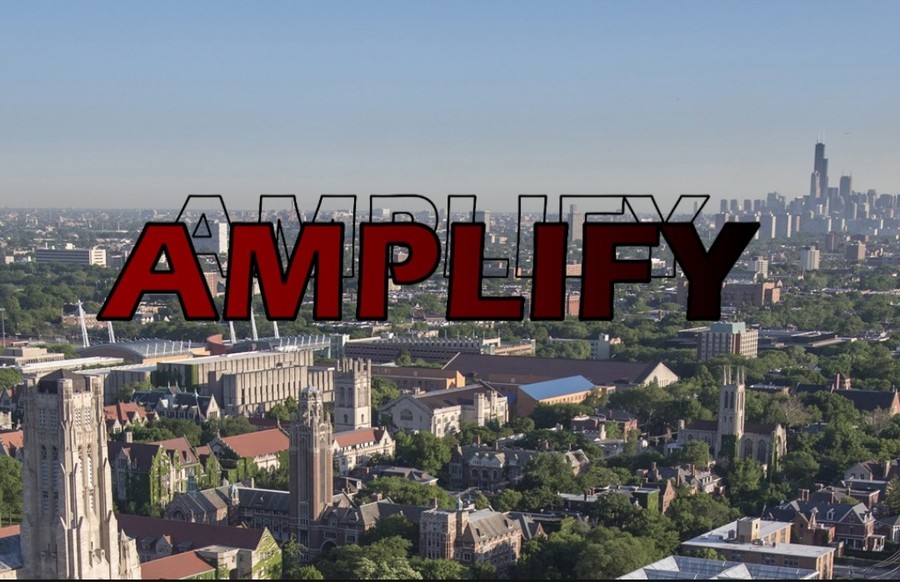 Courtesy of the Amplify Slate.

The Amplify Slate consists of third-year Andrew Langford, second-year Joalda Morancy, and third-year Jacob Chang, running for Student Body President, Vice President for Administration, and Vice President for Student Affairs, respectively. The three are running as a group in accordance with Student Government (SG) protocol for executive slates, in a race that this year consists of four total competing slates.

Amplify has promised to deliver 99 ideas for improving the University of Chicago by election day, 90 of which have so far appeared on their website.

In an interview with The Maroon, Amplify’s members emphasized the slate’s diverse experience with other organizations, including the Chicago Development Forum, Students for the Exploration and Development of Space, and the business fraternity Delta Sigma Pi.

“I think we're probably the best representation of the student body,” Morancy said, “because a lot of the other slates—they have Student Government experience, but they tend to maybe be out of touch of what the student body needs.”

The Amplify Slate would like to divert funds currently not being spent on RSO budgets due to the cancellation of in-person classes to the Emergency Fund, a student-run committee that provides monetary support to students in need, including funding for medication, school supplies, and medical bills.

“The criteria of how that plays out obviously requires University input, especially from whatever plans they may be developing to help students themselves. We would like if the basic needs are met, to see some funds roll over and help RSOs when they get their feet back on the ground,” Langford said. “But generally, the idea is moving surplus funding towards present emergency needs.”

The slate would also like to see the RSO application process adjusted to create a two-tiered system that distinguishes between organizations that require significant University funding and those that do not.

This, Langford said, is designed to make the procedure for the latter group easier and more efficient. By agreeing to use minimal University resources, student groups applying for RSO status should be able to bypass some of the paperwork associated with the application, the slate argues.

“We know some people who have gone through the wringer for RSOs that don't use any funding because of financial concerns,” Langford said.

On the Ongoing COVID-19 Crisis:

Amplify believes “that there definitely should be some sort of tuition adjustments because there are students who have been really affected by this crisis,” Chang said, though the slate does not support the universal 50 percent tuition reduction demanded by UChicago for Fair Tuition.

Instead, Chang said, “tuition reductions should be handed out on a case-by-case basis.“

This, they said, is due both to their belief that the members of the Class of 2020 deserve their own ceremony and concerns about the strain that the 2021 convocation could place on University infrastructure as larger crowds than normal congregate on the University’s campus.

Amplify has promised to promote increased transparency regarding the University’s response to the crisis, holding regular online town halls and filing an inquiry into the $6.2 million the University recently received in federal stimulus funds.

On Diversity and Inclusion:

The Amplify Slate supports the creation of a comparative race and ethnic studies (CRES) department, a demand made by UChicago United.

“We want to make sure the University recognizes these activists because in the past, they haven't really paid any attention or chosen to recognize them,” Morancy said.

They will also seek the introduction of Diversity and Inclusion Czars, similar to the existing position of Wellness Czars, though the housing system. These students would provide students information related to issues of identity and inclusion on campus, including informing them of upcoming events and workshops.

The Amplify Slate supports Graduate Students United (GSU)’s push for recognition from the University, and hopes to help facilitate dialogue between graduate students and the administration if elected.

Langford said that the current moment presents a unique opportunity to push for graduate student demands. He is optimistic about the possibility that former Vice President Joe Biden will win the presidency in the November election and preside over a National Labor Relations Board that would be more favorable to graduate students seeking to unionize.

If elected, the Amplify Slate would push for a campus-wide plastic bag ban, as well as work with campus cafés in an attempt to reduce other forms of plastic waste.

The Amplify Slate opposes the University’s recent transition to a Latin honors system, which rewards students based on their academic performance relative to other students in their majors.

“We believe that it puts a lot of unnecessary pressure on students,” Morancy said.

She voiced support for a return to the previous system, which awarded honors based on a fixed cutoff for grade point average, or a different system that would not be detrimental to students’ mental health.