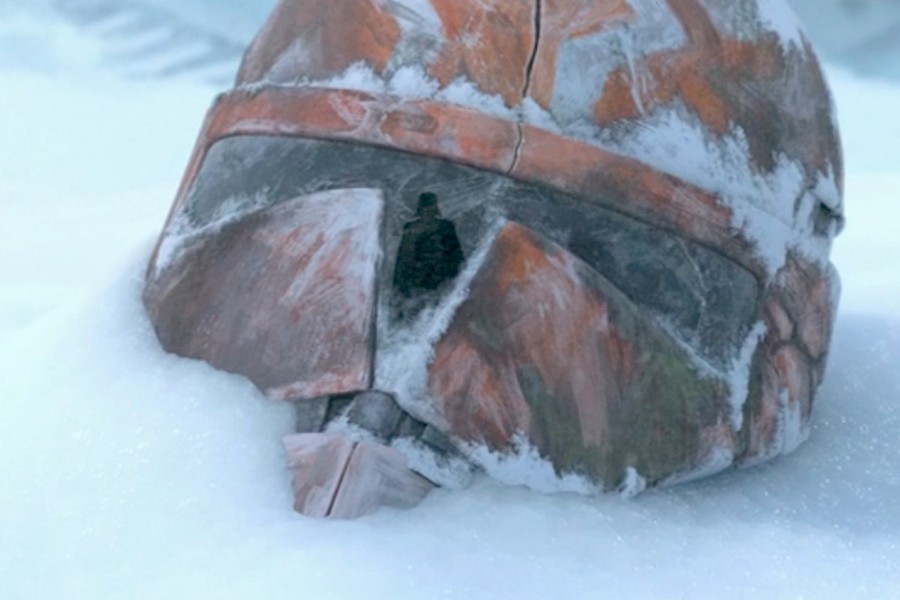 Our final look at the Skywalker Saga, the Siege of Mandalore will breathe bloodmist, yet it is not so morbid as to push away its younger audience.

The following review contains major spoilers for the Siege of Mandalore arc in Star Wars: Clone Wars. Unlike my other review, you might actually care about the spoilers in this one because I spoil everything from beginning to end.

That affirmative yet unsettling declaration haunts the final arc of the entire Clone Wars series, testing the meaning of loyalty among all the victims of the Phantom Menace. Without the signature Star Wars fanfare, the Siege of Mandalore opens with a bleak Lucasfilm title card, followed by a blood-red Clone Wars logo. Before the action even unfolds, this story already alludes to the color scheme of Revenge of the Sith (2005): arguably one of the darker episodes of the Skywalker saga, stained by the mass genocide of a religious order, the collapse of the Republic, and the downfall of the Chosen One. Our final look at the Skywalker Saga, the Siege of Mandalore will breathe bloodmist, yet it is not so morbid as to push away its younger audience.

Right away, “Old Friends Not Forgotten” teases the growing power of Anakin Skywalker (Matt Lanter) and his dedication to the Republic. Nonchalantly dodging bullets while Obi-Wan (James Arnold Taylor) and his 212th Attack Battalion helplessly take cover, and ultimately securing a Republic victory, Anakin embodies the confidence of a proper Jedi Knight, while also demonstrating that he heeds his master Kenobi’s teachings (committing perfidy, perhaps allowed in the Star Wars universe, as Obi-Wan did against General Loathsom) in his own battle strategies—perhaps in this case, better than Kenobi himself. Anakin’s faith in the Jedi, albeit shaky in the past, shows some signs of rising again, especially when he reunites with his former Padawan Ahsoka Tano (Ashley Eckstein) and gifts her two lightsabers, blue like his, in contrast to her formerly green sabers. Symbolically blue, the sabers showcase his trust in the Jedi, and his small hope that perhaps his Padawan would return to the Order again to fight by his side and not leave him—not this time.

However hopeful this first episode might have been, it also reveals the subtle ways in which Ahsoka and Anakin fail to truly reunite after her resignation from the Order. Anakin, excited to see his former Padawan again, is shut down by an aloof Ahsoka, who only tells him that they could catch up later (obviously, in hindsight, we realize this won’t be the case). The only reflection of their friendship is reflected in their parting words, when Ahsoka wishes Anakin good luck on his mission to rescue Palpatine from General Grievous. Anakin had previously taught her that luck is a part of strength—despite Ahsoka’s reluctance to embrace the Jedi way, she still values what she has learned from her former master. That said, Ahsoka’s friendly rivalry with Captain Rex (Dee Bradley Baker) was a fresh relief; at least some things are bound to remain unchanged.

“The Phantom Apprentice” is eerie, unsettling for the very reason that Darth Maul (Sam Witwer) knew what was going to unfold all along. The highlight of this episode, hands down, was Maul dueling Ahsoka in the throne room. Thanks to motion-captured choreography, portrayed by the original Maul (Ray Park) and Lauren Mary Kim as Ahsoka, this was the most humanlike dance of the entire season. Gorgeously created, it also teems with symbolic significance: As Maul launches his first spar, we can barely hear a screech in the background—something that sounds all too familiar for any prequel fan: the Force scream, similar to one that Palpatine yells when he attacks Master Windu (which would happen a few moments after this duel). I’m certainly not the only one who noticed this, but I find that this parallel makes this scene even stronger: As Anakin falls to the Dark Side after helping Sidious in the murder of Master Windu, Ahsoka keeps her allegiance to the Republic and captures a former Sith Apprentice. Of course, it isn’t that easy; in a gesture strikingly similar to Kylo Ren beckoning Rey to join his side, Maul extends Ahsoka a hand, urging her to join him to stop Sidious and his new apprentice—Anakin himself. Ironically, whereas his apprentice resists, the master succumbs to the Dark Side…and yet, both are puppets in Darth Sidious’s game. Maul desperately shrieks as he is captured that the Republic soldiers and the Jedi don’t know what they’re doing, and he’s right. It doesn’t matter what the Jedi attempt to prevent, and what the former Sith (Dooku in Episode II, Maul now) try to hint at them to prevent—all sides have been manipulated to perfection.

The final two episodes are the most heart-wrenching episodes of the season and arguably of the entire series itself. “Shattered” unravels the start of Order 66, and, as painful as it already was to see it in Episode III, Clone Wars makes it even harder to watch because it gives its actors so much character. Rex trembles as he receives the order from Sidious, dropping his helmet and begging Ahsoka, his best friend, to find Fives—the clone with the malfunctioning chip—to unlock the secret behind Order 66…all before he shoots at her unthinkingly. Sending further blasters through the heart, the clone troopers had previously painted their helmets with Ahsoka’s Togruta facial markings, pledging their undying loyalty. But even when her friends shoot at her, Ahsoka refuses to deflect their attacks to kill them. A beautiful twirl of Form IV Ataru-Shien and Jar’Kai tactic, the animation was stunningly real as Ahsoka’s defenses slowly started to shatter before Rex, who, having had his Order 66 chip removed, kills his brothers to save Ahsoka’s life. The questionable definition of a good soldier resonates most strongly within Rex at this very moment: Would a good soldier adhere to his given orders or willingly betray them to save a friend, yet lose his fellow soldiers in the process? We don’t know, and Rex, in constant turmoil, doesn’t either. The unsolved question haunts us, and it is that much more powerful as a result.

Maul’s chaos, on the other hand, is one of the most thrilling sequences I’ve seen in Clone Wars. It is reminiscent of Vader calmly walking toward the Rebellion in Rogue One, nonchalantly slaughtering the Rebels as he sweeps through the hallway. In Maul’s hallway scene, it grows even more exhilarating because of the lack of lightsabers. While Maul is infamous for his dual saber, in this scene, he solely uses the Force to cause mass destruction aboard the ship—slicing the heads off of clone troopers, amputating the arm of one, and eventually destroying the hyperdrive generators, rendering the entire ship useless. Here, Clone Wars truly demonstrates the raw power of Maul and why he was chosen as a Sith apprentice in the first place. It was epic and everything a Maul fan could have asked for.

“Victory and Death,” the finale of Clone Wars, was executed to absolute perfection. Rex tears up, knowing that he must betray the only family he ever had to save Ahsoka’s life, all the while knowing that everyone aboard the destroyed ship is hurtling to their deaths. “You wanted this chaos,” Maul snarls at Ahsoka, and, to an extent, to all those who had failed to listen to his pleas to overthrow Palpatine.

And he was right: The following scene shows Ahsoka standing amongst a mass graveyard of the fallen soldiers after the ship crashes onto a rocky moon. She and Rex had buried all the clone troopers, marking each grave with their bloodied helmets—Jesse’s helmet at the very forefront. In a symbolic moment of devastation and determination, Ahsoka drops her lightsaber alongside the graves, giving up the Jedi way permanently as she realizes that the Order has vanished and failed everyone—including herself.

The season concludes with a singular scene of a fallen Anakin Skywalker, completely transformed into Darth Vader, as he walks onto the moon where the ship had crash-landed. Now, the moon is covered in snow, burying the graveyard of clones and rendering it invisible save for one half-buried helmet painted with Ahsoka’s face markings. This is the exact moment that Vader loses the last shred of Anakin Skywalker for many years until his reunion with Ahsoka in Rebels. When he discovers Ahsoka’s rusted saber, now without an owner, and ignites it, his last tie to his past is severed; he lost his friendship with Obi-Wan, his wife Padmé, and now, the student he had helped nurture. Believing his apprentice dead, he can only look up to the sky—interestingly, we can just barely see his eyes behind the mask—and stare at a bird, thought to be Morai (the Daughter’s convor who follows Ahsoka), circling in the distance, before silently retreating. Anakin stumbles onto the moon, and Vader leaves it.

But it wouldn’t be Star Wars without a message of resistance: He takes Ahsoka’s saber with him. Fascinatingly, while Ahsoka purposefully drops her weapon to deny her status as Jedi, her master picks it back up. While she relinquishes the Jedi way, he embraces part of it and always will. And so Clone Wars ends—empty, bleak, and defeated, yet with the slightest bit of hope that, like Padmé stated, there is still good in the man who was once Anakin Skywalker.

The Siege of Mandalore feels cinematic, teeming with familiar gestures and choreography unlike any other I’ve seen. No matter what I try to write, and for how long I write, I know I will never do this arc justice. While only the Sith deal in absolutes, I can say this with confidence: When tackling darker topics such as death, betrayal, and loss, the final arc certainly delivered with striking clarity, animation, and a draining emotional toll. It is the fans’ own chilling binary sunset: our last look at the Skywalker Saga, the bittersweet farewell that promises change to come for the coming rebellion, and our closure with a story that spanned 40 years. Bravo.