The keystone from Douglas Hall at the Old University of Chicago set in the "C Bench" outside Cobb Hall.

The University has removed a plaque honoring Senator Stephen Douglas from Hutchinson Commons, as well as a stone mounted in the wall of the Classics Building which came from Douglas Hall, a building from the campus of the Old University of Chicago. Another stone from Douglas Hall remains on campus in the “C Bench” outside Cobb Hall as of Tuesday morning.

The stones’ removal follows weeks of high-profile civic unrest and public reckoning around the legacy of slavery and anti-Blackness in the United States. Douglas, the namesake of the hall from which the stones were taken, owned slaves in his wife’s name.

Douglas was the first president of the Old University’s board of trustees and donated a 10-acre plot of land in Bronzeville which formed the Old University’s campus. According to research by the Reparations at UChicago Working Group (RAUC), Douglas used a 3,000-acre Mississippi plantation and 142 enslaved Black people owned by his wife as collateral to finance the purchase of the Bronzeville land. Mired in financial troubles, the Old University was foreclosed on in 1886. Its campus was demolished in 1890. 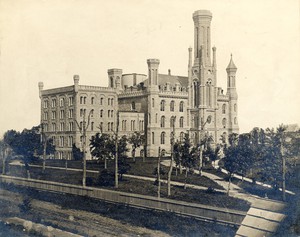 Douglas Hall at the Old University of Chicago campus in Bronzeville.

In a letter to the University community announcing the removal of the plaque and stone, President Robert Zimmer said, “While it is critical to understand and address the ongoing legacy of slavery and oppression in this country, Douglas does not deserve to be honored on our campus.”

Campus organizers, including the RAUC, have demanded that the University recognize its connection to Douglas and the Old University for years.

“Douglas died in 1861 and had no connection to the University of Chicago that was founded in 1890 as a new institution with a distinct mission,” Zimmer wrote in the email. Quoting from Dean of the College John Boyer’s history of the University—the same source referenced in Zimmer’s email—the RAUC has argued that both universities of Chicago were connected through shared donors and faculty members. 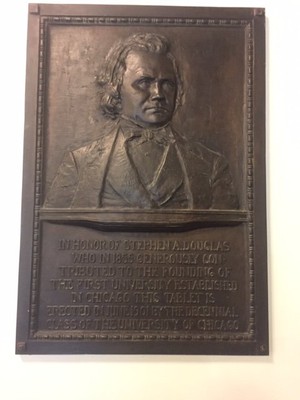 A Plaque honoring Steven A. Douglas was removed from Hutchinson Commons.

On Twitter, the RAUC said the removal of the stone and plaque do not align with community members’ demands. “We have never heard anyone call for this,” the group said, instead pointing to community demands for reparations “in the form of affordable housing, health care, education, a #CBA for the Obama Library, an end to the University of Chicago’s private, unaccountable police force, and, perhaps most importantly, a permanent Center for Reparative Justice.

The bronze plaque removed from Hutchinson Commons was donated to UChicago in 1901 by that year’s graduating class to honor Douglas and celebrate the first decade of the new University.

Left to Right: a stone from Douglas Hall set in the wall of the Classics Building; the hole in the wall after the stone was removed on July 5th; the patched wall on July 7.

Miles Burton and the University of Chicago Library

Zimmer said the stone and plaque will be relocated to the University’s Special Collections Research Center.

Another stone from Douglas Hall remains on the quad as of Tuesday morning. As The Maroon reported in 1923, another alumnus of the Old University, E. A. Buzzell, “sentimental enough to treasure any relic of his alma mater, procured the keystone of the entrance arch of the old building,” and donated it to the new University on Alumnae day in 1922. It was placed in the “C Bench” in front of Cobb Hall upon the completion of the new paved walkway in 1923.

The plaque beneath the stone from Douglas Hall at the Old University of Chicago in the "C Bench" outside Cobb Hall.

It is unclear why this stone was not removed alongside the stone and plaque announced in Zimmer’s email. When asked if an oversight led to the second stone from Douglas Hall remaining on the quad or if it would be removed, Gerald McSwiggan, a University spokesperson, said he could not provide additional details.