Finding Your Soul with Pixar’s "Soul" 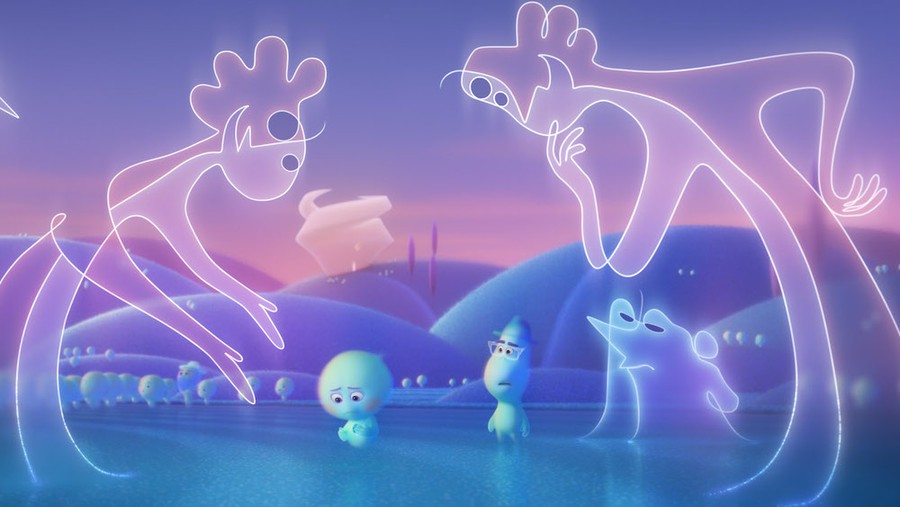 Pixar's Soul gives viewers creativity, beauty and humor in its depiction of The Great Before.

To cry, or at least get emotionally worked up, after watching a Pixar film is pretty much the standard expectation at this point. To this day, Pixar films still resonate with audiences because they create an experience that is engaging to children and adults alike, while presenting complex situations with a wide range of themes.

Unfortunately, in my opinion, Pixar has been in a slump since the release of Toy Story 3 in 2010. Apart from uninspired sequels such as Cars 2 and Finding Dory, or mediocre disappointments such as Incredibles 2 or Brave, their only noteworthy films in the past decade have been Inside Out and Coco. Even then, they are not in the same league as classics such as Ratatouille or Up. Therefore, given Pixar’s decade-long decline, I had low expectations for Soul. Instead, what I got was not only the best Pixar film of all time, in my opinion, but a beautifully-told story that tackles mature, philosophical questions such as “What’s the point of being alive?” and “Why is life even worth living?”. This film touched me like no other Pixar film has done before, and, as a UChicago student currently coping with mental-health issues, I certainly needed a movie like this now more than ever.

Directed by Pixar legend Pete Docter (Monsters Inc., Up, and Inside Out) and Kemp Powers (One Night in Miami and Star Trek: Discovery), Soul follows the story of Joe Gardner (Jamie Foxx), a middle-aged school-band teacher who, after receiving the chance of a lifetime to become the new pianist for the legendary Dorothea Williams (Angela Bassett) Quartet, accidently falls into a manhole and dies. His soul will travel from New York City to the Great Beyond: the post-existence place of life where deceased souls enter a giant glowing hole and where, if entered, they simply cease to exist. Believing that he is not ready to die yet and wanting to return back to Earth, Joe attempts to escape the Great Beyond, but he accidently travels to the Great Before—a fantastical place where new souls get their personalities, quirks, and interests before they go to Earth and live their lives. Determined to return to his life and accomplish his dream of becoming a jazz pianist, Joe teams up with a sarcastic, pessimistic soul named 22 (Tina Fey) who struggles to understand the appeal of the human experience. As Joe desperately tries to get back into his body and show 22 why life is worth living, he will ultimately go through his own spiritual journey that forces him to confront the question that 22 brings up during a scene in a barber shop: Is all this living really worth dying for?

Right off the bat, the look and visual presentation of Soul is gorgeous. While I know beautiful CGI animation is expected from Pixar at this point, the visuals in this film are on another level. Soul’s New York City is so incredibly detailed and polished that it almost looks and feels like the actual city. However, the scenes that take place in The Great Before are just as visually interesting, with a look that feels reminiscent of Docter’s previous Pixar film, Inside Out. The scenes that take place in the Great Before take advantage of both traditional, hand-drawn 2-D animation and CGI 3-D animation, both of which create a wondrous, imaginative afterlife and uniquely drawn character designs, specifically regarding the two Jerrys and Terry, the interdimensional beings who serve as both the guardian angels and the keepers of the afterlife. Without a doubt, this is Pixar’s best-looking film to date, and I really hope Pixar continues to push itself further with its visuals.

Soul also boasts an excellently well-composed score, creating some of the best music Pixar has produced in a film since The Incredibles and Up. Unlike previous Pixar films, Soul’s music is composed by three different musicians. All the jazz sequences in the movie are composed by The Late Show’s lead pianist and bandleader Jon Batiste, while all the music relating to the more spiritual aspect of the film are composed by legendary musicians Trent Reznor and Atticus Ross (The Social Network, Gone Girl, and Watchmen). Overall, the soundtrack is beautifully composed, creating music that is exciting while also enhancing the story and characters of the movie. Both of these unique styles of music blend excellently, resulting in a score that is unique from the rest of Pixar’s filmography, and that represents Joe’s character and the journey he undergoes throughout the film.

It only makes sense that music plays such a vital and assertive role in the movie. Beyond the fact that Joe loves piano and dreams of becoming a professional jazz pianist, the film’s score also symbolizes the power of music. Throughout the film, there are several moments where 22, trapped inside Joe’s body in the second act of the film while Joe is trapped inside a cat’s body, witnesses average people finding passion in the music they play. Prior to the second act, 22 makes it clear to Joe that she has no passion or interest for music whatsoever, stating that she views music as nothing more than “loud noise.” However, when 22 is transferred into Joe’s body and literally walks a day in his shoes, 22 slowly learns just how powerful music can be. One of my favorite scenes in the movie is when 22 and Joe are enthralled by a busker as they are waiting to ride the subway. 22 acknowledges not only how talented the guitarist is, but that listening to him sing so passionately made her feel emotions that she didn’t know she had while living in the Great Before.

Both my favorite use of music and my favorite scene in the entire movie take place at the end of Act 2 and the beginning of Act 3. At this moment, Joe has accomplished his life-long dream of becoming a professional jazz pianist. Not only has he been able to give a powerful performance at a Dorothea Williams concert, but he has now become a permanent member of the quartet. Nevertheless, he still feels unfulfilled, disappointed by the fact that he doesn’t feel any different than before. Then, when he arrives at the apartment and looks at all the mementos he collected while 22 was inside his body, like the lollipop from the barber shop and the pizza crust from when 22 tried pizza for the first time, Joe sets aside his sheet music and puts these mementos on his piano. He then proceeds to play the piano, scored beautifully by Trent Reznor and Atticus Ross, and begins reminiscing on all the small, happy moments in his life. Whether it’s riding his bike in Central Park, watching fireworks with his parents, playing music one last time with his dying father, standing on the beach with his mother, or teaching music to an uninterested student who would go on to become the drummer for the Dorothea Williams Quartet, Joe allows these moments to lead him toward an epiphany.

In the first act of the film, Joe recounts how he has “wasted his life” when he goes through his memories in the Great Before. However, when Joe later plays piano during this scene and reminisces about the happy, fulfilling moments in his life, he finally understands that he did not waste his life but has lived a very satisfying one. Yes, Joe had not fulfilled his dream at that point, but that doesn’t mean that Joe had not accomplish anything with his life. He was simply so laser-focused on his goal of becoming a jazz pianist that he forgot to appreciate the little moments. He got to spend his life with people he either loved or inspired, and the moment Joe realizes this, he starts tearing up, understanding that it was worth living every second of his life. The moment Joe tears up during this moment is the moment I started crying like a five-year-old. I realized that not only that Soul had become my new favorite Pixar film, but also that I finally understood what this movie is really about: living life to its fullest no matter what.

Essentially, the movie is trying to communicate that the point of life is life itself. Soul tells us that no matter what kinds of passions we have in life or what we believe to be “our purpose,” we always need to remember to take the time to cherish each moment in our lives. Joe’s crazy adventure in this movie is a reminder that we only have a limited amount of time on this earth, so we shouldn’t waste it on “all the junk of life,” in Joe’s words.

Life is a beautiful, wonderful experience that is especially worth living if we remember to live it to its fullest, to cherish every moment of it whether by ourselves or with loved ones. In Soul, Joe and 22 each had to undergo their own spiritual and physical journey to understand the meaning of life, which is why this movie impacted me so much: the film was made for people like myself who feel confused and lost about what they’re supposed to do in life. I really do believe that anyone, including any UChicago student, who takes the time to sit down and watch this movie can be emotionally impacted and inspired enough to finally go through their own journey to discover their reason for living. I don’t exactly give out this score like candy, but I believe that with this film’s excellent writing, great performances from Jamie Foxx and Tina Fey, beautiful direction, gorgeous visuals, perfect musical score, and powerful themes about life and living that personally connect to me are enough for me to give Pixar’s Soul a perfect 10/10.