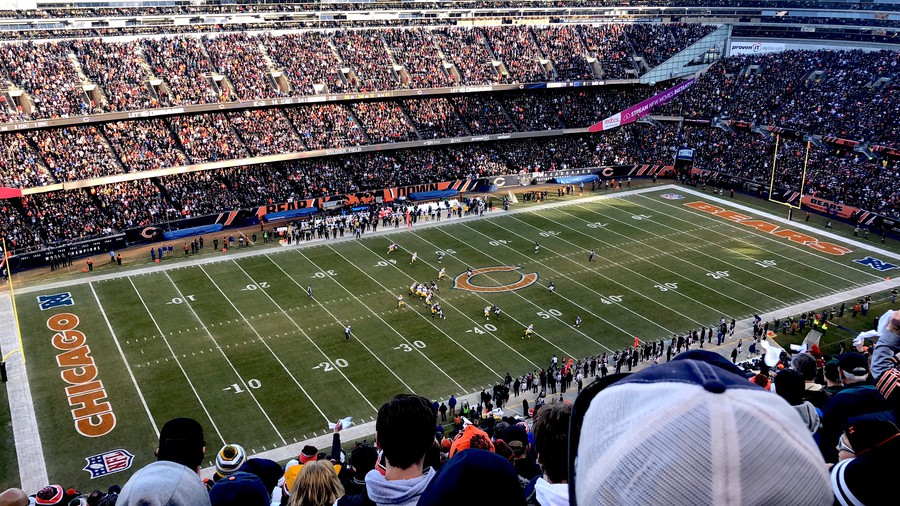 Home of the Chicago Bears.

“At least we made the playoffs!” Barely. The NFC was a mess this year. The Cardinals fell apart at the end of the season in spite of going 5-3 in the first half of the season, the Vikings’ defense was a train wreck throughout the season, and as a result, the 2020 Chicago Bears became the first wild card team to make the playoffs without a winning record in over a decade, before being walloped by the Saints in the first round. The Bears' season was marred by awful coaching decisions, another great defense being wasted by an inept offense, and a quarterback controversy that threatened to destroy the season (which it eventually did).

Let’s take a look at the quarterbacks first. If we looked at the stats, they’d tell us that Mitch Trubisky went 6-3 as starter, throwing for over 2,000 yards with 16 touchdown passes and 8 interceptions, while Nick Foles went 2-5 as starter, throwing for over 1,800 yards with 10 touchdown passes and 8 interceptions. Don’t let those stats mislead you. One of Trubisky’s “starting” wins came when Foles saved the day against the Atlanta Falcons, throwing three touchdown passes in the fourth quarter and overcoming a 16-point hole Trubisky had created. The other five wins came against the Giants, Jaguars, Vikings, Texans, and Lions, teams whose seasons all ended without a playoff berth and with a top 15 draft pick (the Texans traded their first-round pick to the Dolphins). Trubisky just isn’t a top-tier starting quarterback, and this isn’t to say that Foles is either, but Foles would have been a better option at the quarterback spot this season. Five of Foles’ seven starts came against playoff teams, including four Top-10 defenses, and the Bears were just figuring their offensive line struggles and running game out when Foles was relegated once more to the bench. In my view, the Bears should look to either trade up in the first round to draft a quarterback (BYU’s Zack Wilson would be good pick-ups in my view) or attempt to make a trade for Texans QB Deshaun Watson, even if it ends up costing them two or three high draft picks and/or a player (or two) as good as Khalil Mack, Roquan Smith, or Kyle Fuller.

Now, the rest of the team. Although the Bears defense wasn’t as consistently dominant as it should have been, they still finished in the top half of the league and shut down elite offenses such as Tom Brady’s Buccaneers and Drew Brees’ Saints (twice). All-Pro Eddie Jackson did not have an impressive season at free safety, but players such as linebackers Khalil Mack and Roquan Smith (when he was on the field) and defensive lineman Akiem Hicks were their usual elite selves. Most of the Bears’ issues on defense can be attributed to defensive coordinator Chuck Pagano, who was not aggressive as frequently as he should have been. With Pagano having retired at the conclusion of the season, the Bears should look to hire a coordinator from either the Ravens or Rams system, since those defenses played in the fashion that would fit the Bears’ personnel.

On the offensive side, three players stood out far above the others: wide receivers Allen Robinson and Darnell Mooney and running back David Montgomery. Robinson had over 100 catches and 1,200 yards, cementing his status as one of the best receivers in the NFL. However, the Bears were not able to reach a deal with Robinson to extend his contract, and it looks as though he will leave in free agency. Darnell Mooney emerged during the course of the season as an elite, reliable deep threat who has a promising career ahead of him. Bell cow running back David Montgomery is undoubtedly the most important player on the Bears offense, and his hard-nosed running style, elite ability to find the hole, and deceptive speed evoke memories of a young Adrian Peterson.

Finally, let’s deal with the real problems in the Bears’ organization: the owners. Matt Nagy needs to be fired; his lack of leadership and inability to design an offense to suit the abilities of his quarterback show that he is not fit to be a head coach in the NFL. Ryan Pace has made several good moves as the GM of the Bears, drafting players such as Roquan Smith, Darnell Mooney, David Montgomery, and up-and-coming tight end Cole Kmet, while making important trades to acquire players such as Khalil Mack and signing Allen Robinson in free agency. While all this is overshadowed by the fact that he picked Trubisky over Mahomes and Watson in the 2017 draft, I believe that he should have a chance to draft or trade for a quarterback after Foles and Trubisky.
However, the real problem lies at the top of the Bears, with the McCaskey family. The fact that team president Ted Phillips, in the aftermath of a 21-9 drubbing against the Saints in the playoffs, can say “Have we gotten the quarterback situation completely right? No. Have we won enough games? No. Everything else is there,” and stay in his role at the top of the organization is simply baffling to me. The owners seem to value stability more than they value winning, and that attitude simply will not get it done in the high-stakes league that is the NFL. Things need to change in Chicago, and fast, or we might see Soldier Field and Halas Hall fall back into the purgatorial times that were the days of Marc Trestman, Mike Glennon, and John Fox.