Class of 2024 Reflects on Transition to In-Person Campus Life

After a year of hybrid learning, second-year students adjust to a new robust class climate and campus interconnectivity. 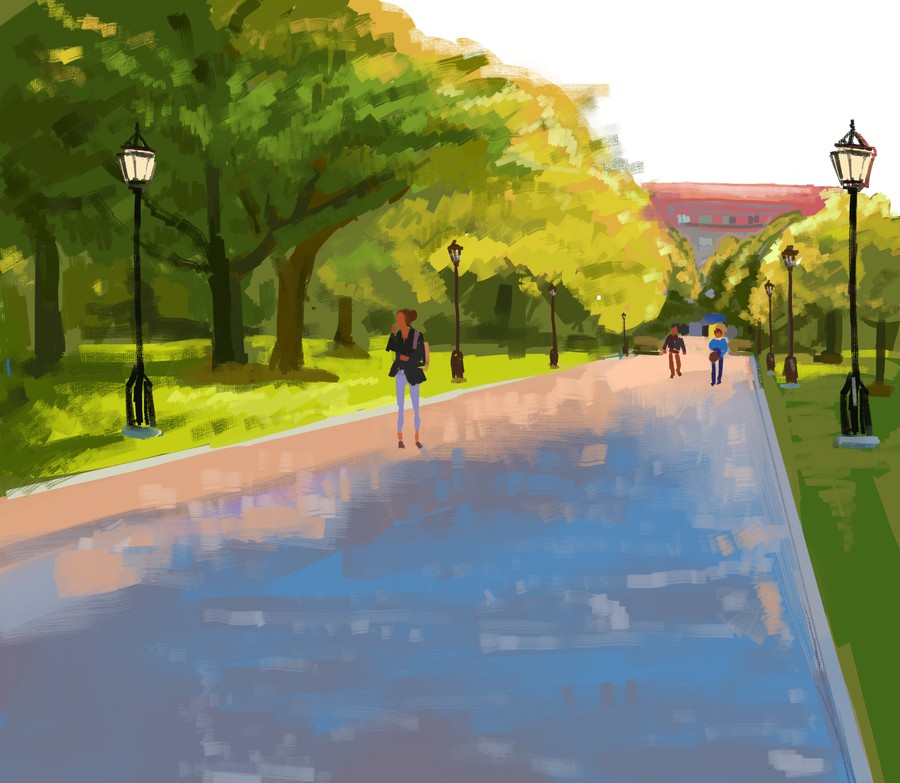 When second-year Leah Iosevich attended her first in-person rehearsal for her all-female a cappella group Medusa this year, she was not only singing alongside her peers for the first time but also connecting with them in a way that online rehearsals never allowed.

“It was amazing how quickly we were able to learn songs and harmonize together compared to last year, because when we were on Zoom, [I] didn’t get to hear anybody else,” she said. “It was fun, but it was a hugely different experience, and we didn’t get to experience our voices combined with everybody else’s, which is what I love about a cappella. It’s great to sing with people, looking at their faces, and knowing that they’re also enjoying it.”

Iosevich, along with the rest of the Class of 2024, had a unique first-year experience due to the COVID-19 pandemic and the University regulations that came with it. Second-year Narvella Sefah expressed that the return of in-person opportunities has encouraged students to socialize with their classmates and become involved in the school community in a way that campus life last year did not.

“I think my favorite part about being in-person is recognizing people in my classes outside, or just walking and doing things,” she said. “If I see someone in my class, I can just go up to them and ask them a question if I was confused, versus when things were remote, it was harder to communicate with other people and felt kind of weird to reach out to someone on Zoom.”

Second-year Brendan Kang said he feels much more motivated to learn and engaged in his classes this quarter.

“I love walking to my classes where I can appreciate our amazing campus and seeing many of my friends,” Kang said. “Overall, the education and experience improved from the transition to in-person classes. I couldn’t be happier with how invested I am in the learning process and my responsibilities with work.”

On the contrary, Iosevich said some aspects of online learning were helpful, such as being able to re-listen to lectures before exams. “This year, if you miss class, and you don’t have a friend in that class, you’re SOL [shit out of luck].”

Students who opted to stay home last year have had a more drastic shift to contend with. Second-year Isha Vasudev, who had two in-person classes last year during fall quarter, decided to return home in the winter after struggling to adjust to the fully remote on-campus environment.

“It was definitely depressing being on campus and just having the big room to myself,” she said. “[I] also didn’t want to experience a Chicago winter without having in-person classes. It didn’t seem like a good trade-off. And then spring quarter, I came back, but everything was online.”

Now, Vasudev lives in an apartment in Woodlawn Residential Commons, where she is able to both interact with her suitemates in a common living space and enjoy time alone in her single room within the complex––a significant change from last year, where Vasudev had a room to herself.

“It’s super nice to just be able to walk in, have a conversation with people, engage with people, and chat with them about their day,” Vasudev said. “It’s the normal stuff that I realize now I will not take for granted.”

The Class of 2024 has experienced one of the most drastically different first-year college experiences in recent history––and hopefully the foreseeable future. Despite the challenges they faced last year, Sefah believes that this shared experience has unified the class and inspired the now second-years to thrive at the University.

“It’s kind of cliché, but it feels like we’re all in this together now,” Sefah said. “We’re all here and doing the same thing. And it’s nice to feel like there’s other people around you and that you’re not so alone.”