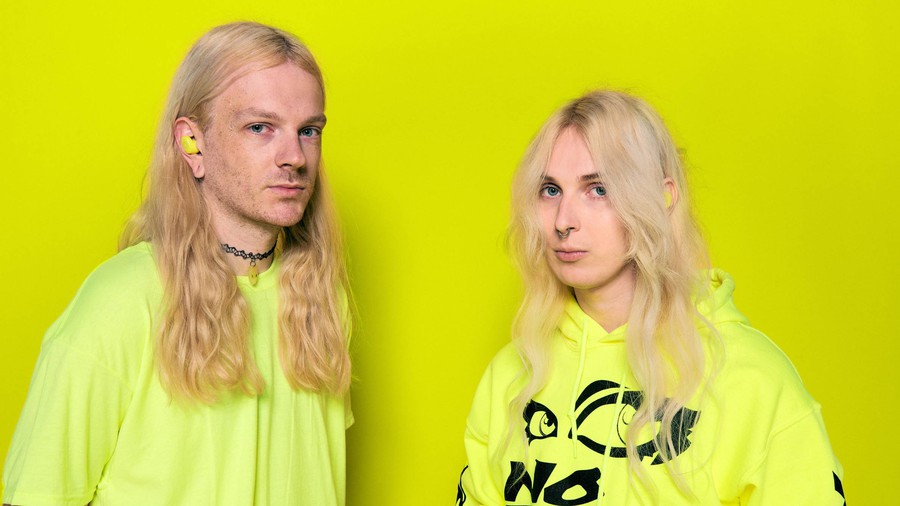 On October 21, about 15 minutes before opening time for 100 gecs’s 10,000 gecs tour, I found myself at a bar down the street from Concord Music Hall, where the duo was set to perform, downing shots with two women who had driven over from Milwaukee earlier that day. “We went to the early show, too,” one of them gushed. “It was just that good!”

When we finally entered the venue, the sweat-soaked hype that my newfound friends exuded was palpable. Not even the gender-segregated frisk lines outside could dampen the crowd’s exuberance; nuns, leatherdykes, the rare drag queen, and bunny-eared goths chanted at the stage, waiting for the electronic noise duo to appear.

Around 11:30 p.m., their calls were partly answered when the opener, Aaron Cartier, appeared. Over heavy, bass-soaked tunes, Cartier delivered explosive litanies against capitalism, the music industry, and more; a mosh pit was in full swing by the time that his set ended. Cartier’s music was omnivorous in its genre-encompassing range, blending together samples from video games, high-pitched synths, and guttural vocals. As he closed out his set, the jitters had dissipated from the throng of black-clad concertgoers, and anticipation filled the air.

It would be past midnight when 100 gecs, Laura Les and Dylan Brady, finally took the stage. The ever-desperate chants of “Gecs! Gecs! Gecs!” from the audience grew into a frenzy and burst into screams as the venue dimmed to total darkness and the duo exploded into a song from their upcoming album, 10000 gecs, titled “Hey Big Man.” The lyrics’ puffed-up bravado (“Redneck Billie tried to fight me on a bad night/ Cut his throat open, smoked an ounce out his windpipe”) is reminiscent of the duo’s breakout single, “money machine,” and its legendary opening gambit (“Hey little piss baby/ you think you’re so fucking cool?”), but louder, more abrasive, and somehow even more catchy. As Les and Brady headbanged along with the pulsating crowd in front of two comically large fake speakers, I was reminded of why their music (and hyperpop, more broadly) caught my attention in the first place—it was wickedly, devilishly fun.

After this stunning introduction, they greeted the whole crowd, and Brady added, “Sing along if you know the words!” The next song, as luck would have it, was a fan-favorite from their debut album 1000 gecs, “stupid horse.” To say that the crowd was singing along would be an understatement; everyone within a 10-foot radius of me was screaming every line to it while limbs, glasses, phones, and bodies went flying in the ska-addled madness blaring from the speakers. Hot on the heels of “stupid horse” was “757,” another unreleased song that spotlighted the gecs’s snarky humor and lyricism, as Les yelled, “Live in dog years and I feel 26/ Yeah, I’m an old bitch, but I learn new tricks” over buzzy synths.

And then it was time for a xylophone interlude, which saw Les kneeling on the floor, hitting the ground with a mallet and tossing it high in the air before the 1000 gecs hit parade resumed with “ringtone,” sending the crowd into nigh-religious ecstasy yet again. “Gecgecgec” got an acoustic makeover; Les and Brady dispensed with the track’s signature Siri-esque vocals and leaned into its sentimental outro to deliver a sweet ballad underscored by thrumming guitars. The audience sang along, arms waving and flashlights held high, before dissolving into chaos as strobe lights flashed to the beat of “hand crushed by a mallet.” The aforementioned breakout single, “money machine,” was also brought out to resounding cheers from the audience. Into the sweat-slick air I plunged, as the mosh pit claimed another body. The crowd was less a collection of distinct individuals than it was a single entity that breathed, kicked, jostled, and yelled, as these familiar tunes ripped through every cell in our bodies.

Between the classics, Les and Brady played even more unreleased songs. From this trove, two stood out in particular: “hollywood baby,” a snarky, grungy earworm that was intended “as a sneering nod to [Les’s] move to L.A.,” and “what’s that smell,” which samples dialogue from the video game Bloodborne and is a comical decree against all which offends the olfactory sense. The new material is notably different. The manic urgency that has characterized their sound remains, but there is something new and exciting and grand in the works. The duo has already taken the music world by storm; could they stunt on us even harder next year?

Their command of the crowd on Thursday night suggests a resounding yes. Les’s livewire presence ripped through the moshing crowd every time she screamed into the mic, and Brady and Les’s electrifying performance had every audience member completely hooked. These genre-bending, attention-seizing musical wizards delivered an exceptional live show, and I am incredibly excited for what 2022 can possibly bring in the name of 10000 gecs.