The University should invest in better beds to help address better sleep and mental health on campus. 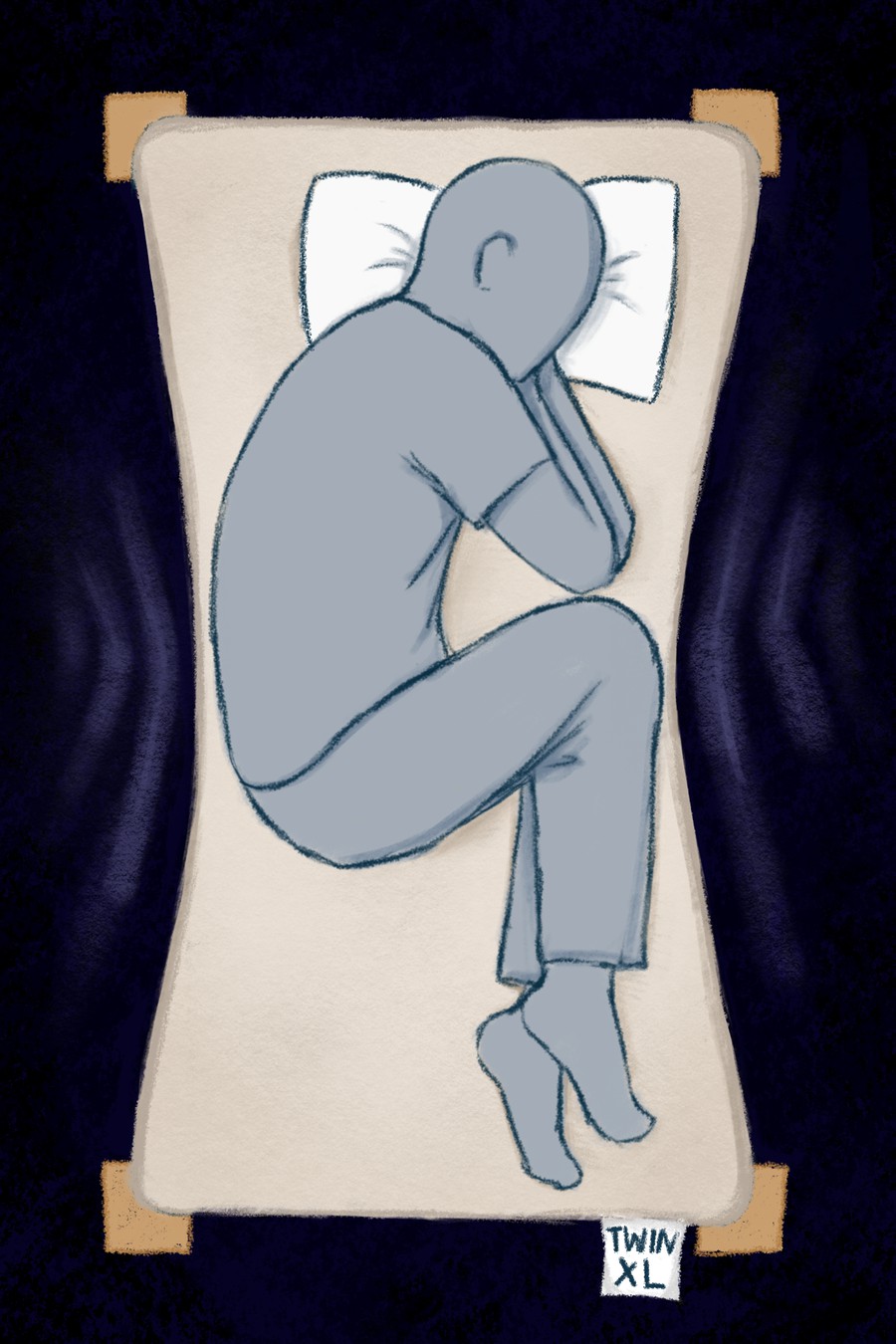 As a college student, my bed is the nucleus of comfort, quietude, and relaxation when school is an inexhaustible well of stress. Excluding significant hours of homework and extracurriculars, my sleep is most encumbered by an awkward and ill-fitting twin XL mattress. By my admission, I require significant width in a mattress, so I can best adjust my laptop to my side and watch mindless TV to fall asleep. After nearly three months in campus housing, the demotion from a queen at home to a twin bed has proved injurious to my laptop, which now tumbles nightly from my bed and pitches a tent on the floor.

A twin XL is a perfect fit for an emergency room, not a college dorm, unless hospital patients are as sexually active as first-years. I can also only assume that this anachronistic device has killed the sleep schedule of thousands of other college students, leading to restless nights, cavernous eye bags, and spines that resemble parabolas.

While full-grown adults sleeping in glorified cribs is comical, the mental health consequences of poor sleep are less so. Sleep is a critical ingredient in a student's performance in and out of the classroom, so examining how to improve sleep should be a central conversation in the University's emphasis on student health and well-being. UChicago—and all universities, for that matter—should upgrade to wider mattresses.

Why have twin beds become a standard for full-grown, sexually active adults? In A Cultural History of Twin Beds, Professor Hilary Hinds of Lancaster University explains how twin beds became a cultural fad in the 19th century as doctors signaled dire health implications of bed-sharing, even between married people. Couples began sleeping in separate beds between the 1850s and 1950s as Victorian doctors warned that “sharing a bed would allow the weaker sleeper to drain the vitality of the stronger.” After twin beds became typical in married homes, they were influential in the architectural and design visions of “avant-garde Modernists such as Le Corbusier, Peter Behrens, and Wells Coates.”

The remnants of such an absurd history continue to dominate University living, though almost half of American adults indicate that they sleep on a queen-size mattress, making queen beds the most common size, with king and full-size mattresses following behind. Twin-size mattresses contributed to 17.2% of beds shipped in the US in 2018—compared to 24.7% in 2010. While American adults realized the inconvenience of a bed that's virtually the size of a bath towel, American universities have adopted the twin bed's close relative: the twin XL. Why have colleges adopted the twin XL to provide additional length, but equal attention is not given to the width of the bed?

The size of a mattress has consequences on a good night's rest and, thus, a student's overall well-being. Jessica Alexander, a spokeswoman for Sleep Council, a leading sleep organization in the United Kingdom, advises that “people should always buy as big a bed as they can afford, ‘as having a bed that fits will considerably improve the chances of a good night's sleep.’” The average person turns over “between 60 and 70 times a night,” and with a width of 3 feet 2 inches, the twin XL does not favor frequent “rollovers.”

Consequently, though many of us acquiesce to poor sleeping habits inherent within an academically-rigorous University, the increased susceptibility to mental health disorders should not be overlooked. The National Sleep Foundation reports that “over half of college students get fewer than seven hours of sleep each night during a typical semester” and “47 percent report daytime sleepiness at a near-daily frequency.” Additionally, “Sixty percent of college students meet the clinical criteria for poor sleep, and 27% are at risk for a sleep disorder.” In a 2019 study assessing sleep quality and academic performance, most students reported pulling at least three all-nighters per month: The average all-nighter produces the same effects as a 0.05 percent blood alcohol concentration. More broadly, sleep deprivation worsens “cognitive performance and mood and increases students' risk of depression, weight gain, and drowsy driving accidents.”

Personally, I am not a stranger to adverse mood shifts due to poor sleeping patterns. But why is that? What makes me start randomly punching the air at 4 p.m. on a Wednesday while walking across the Midway (it's only partially the wind)? Sufficient sleep facilitates the brain's processing of emotional information. According to the National Sleep Foundation, when we sleep, our brains work to evaluate thoughts and memories, and poor sleep “is especially harmful to the consolidation of positive emotional content.” This can influence “emotional reactivity and is tied to mental health disorders and their severity, including the risk of suicidal ideas or behaviors.”

Universities have molded campus housing to accommodate these glorified hospice beds, which presents a unique challenge when suggesting they adopt sleeping apparatuses that fit the needs and size of an adult. However, while many University residences have been designed to accommodate smaller beds, many of us in UChicago's newer residence halls can attest to the excess floor space in the rooms. A full-sized bed—16 inches wider than a twin XL—could easily fit into a single or double at several dorms on our campus.

Overall, while I'm aware that my argument may not be sobering to UChicago students—who are often eager to brag about our lack of sleep—the relationship between sleep and cognitive functioning should alarm both students and universities. And while I admit my idiosyncratic sleeping habits create a challenging experience in a twin XL, I can only imagine other students feel similarly. The inextricable connection between sleep and mental health should concern our University's mission to provide “integrated wellness services that enable students to thrive.” Perhaps the University should consider other methods of restorative sleep, such as black-out shades and year-round temperature control, all of which are linked to successful sleep, not to mention a relatively inexpensive mental health campaign compared to hiring more therapists. Nevertheless, to start, I challenge the University to prioritize the impact of sleep on its students’ well-being, comfort, and overall learning experience by leading the exodus of twin XL beds from college campuses, so I may once again enjoy a good night's rest.

Henry Cantor is a first-year in the College.